Flashdance Musical Builds On The Virtues of its Populist Film Roots 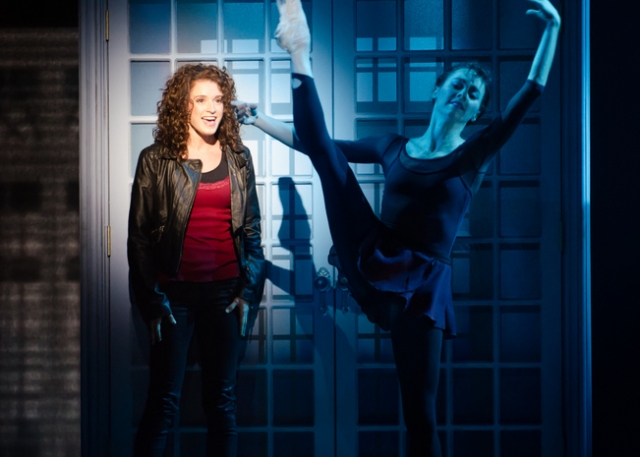 In the late 1970s to the middle ’80s a wave of feminist films swept mainstream cinema with female protagonists who struggled against the odds to make their way and find their place in the world – quests for fulfillment, empowerment, social justice, and meaning. It was an important wave that made its mark on a generation and challenged the older so-called ‘greatest generation’, a generation vastly more unreasonable than Tom Brokaw would have us believe. Bear in mind, this was the time when Reaganism dashed the Equal Rights Amendment (ERA) movement that had gained traction under the previous pro-feminist President Jimmy Carter. Some of these films included Norma Rae, Educating Rita, Places in the Heart, The Bostonians, Cross Creek, Yentl, The Color Purple and perhaps the best, Out of Africa. But one such film in particular appealed to younger women. It had what we called in those years, ‘teenybopper’ appeal. It was Flashdance (1983) and its protagonist, Alex Owens (Jennifer Beals) welds in a steel mill, moonlights as a dancer in a bar, and aspires to be a professional ballet dancer. Make no mistake, Tom Hedley’s story and his screenplay co-written with Joe Eszterhas was a goddess send and awakened girls and young women to new dreams. But now Hedley’s book for the new musical, co-written with Robert Cary with music by Robbie Roth and lyrics by Roth and Cary sharpens, deepens, and revivifies the ideas put forth 30 years ago. It’s ideal for our  Occupy Wall Street era.

Flashdance, the Musical draws a meaner, more unsettling contrast between the sexy but more serious bar where Alex (Emily Padgett) dances and the exploitative bar that draws young dancers to it with false promises and illegal drugs. There’s a more visceral sense that Nick (Matthew Hydzik) the steel mill heir who falls for her, and her for him, is up against an inexorable, formidable family legacy of cutthroat capitalism. Director/choreographer Sergio Trujillo has punctuated the fear and anxiety of Alex’s male co-workers who face being laid off. Moreover, it makes Alex all the more heroic as she comes to bat for these men. There’s no vengeance against coomon men here, only against men who abusively wield power -whether they are a corrupt bar owner or steel magnates who smother their better relatives. This is a crucial distinction not always made in feminist work. 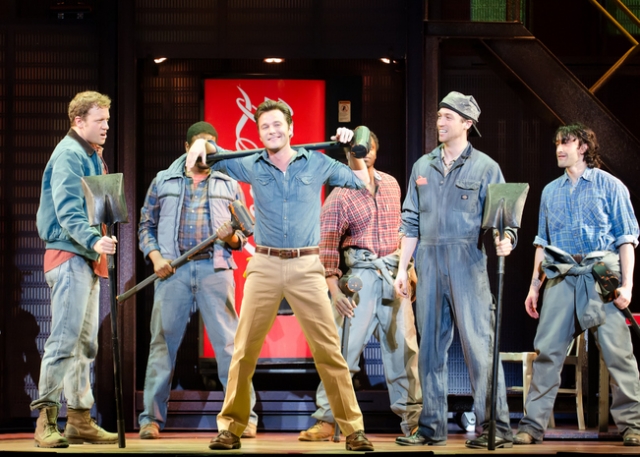 Matthew Hydzik and the Company of Flashdance The Musical. Photo credit: Kyle Froman

Flashdance’s interplay between the worlds of gritty blue collar life and the ethereal ballet life are enhanced considerably in this stage version. Just as women are not pitted against men as a class, only those who exploit men and woman, so it does not pit grit against high culture. There’s a beauty to both working class ruggedness and the graceful realm of sensual artistry than anyone with a pulse is invited to experience. Trujillo’s choreography strikingly contrasts the raw style of the women dancing at the bar with the god and goddess-like sense of men and women in ballet. 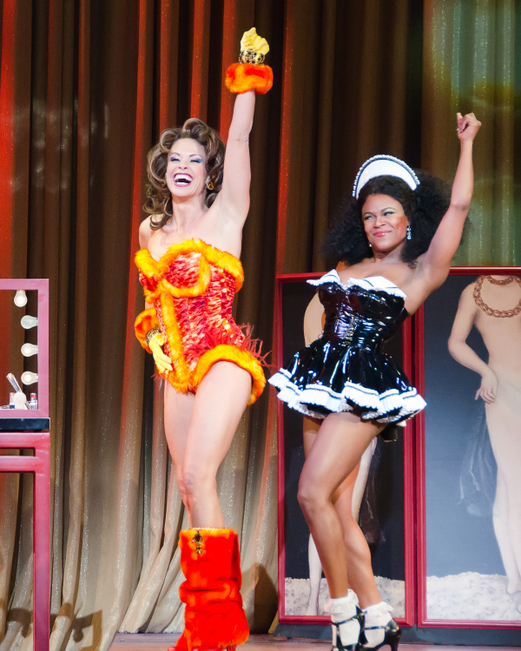 Padgett and Hydzik are truly endearing. Kelly Felthous, Dequina Moore, and Rachelle Rak are a splendidly sassy Greek chorus trio who frame much of the show’s philosophy and the show’s rough and tumble environments. Jo Ann Cunningham is sublime as Hannah, an aging dance maven who reminds us that the dance world actually has its own rugged gritty demands and sacrifices.

Matthew Henerson as the nice bar owner and Christian Whalen as the corrupt one maginificently contrast one another. David R. Gordon charms as Jimmy, the off-putting comic but Hedley and Cary need to beef up his part with more groaners. There’s more of an arc in this character as expressed through his bad jokes that still needs to come from within the script.

Doug Besterman’s orchestrations are powerful but too often it’s difficult to make out the lyrics being sung. Balance please. That said, there may be points when there are no voices where the music can afford to soar more. Peter Negrini’s projection design glistens with working class vibrancy and is nicely complemented by Howell Binkley’s lighting. Trujillo’s team gives us a wonderful production that celebrates the common woman. 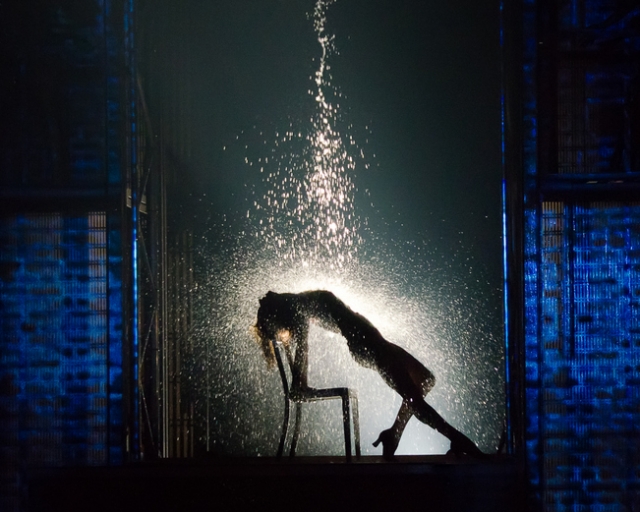