As a fan of the Minnesota Orchestra, I wear my I Heart Osmo button proudly. And now, after a visit to the music director’s beloved homeland, I Heart Finland, too. And I Heart Sibelius, the land’s fanatically revered composer, after tracing his roots in the year of his 150th birthday. He lived his life for music, fuelled by two other loves: for his emerging nation (Finland was ruled first by Sweden, then Russia, until independence in 1917) and its extravagant natural beauty. 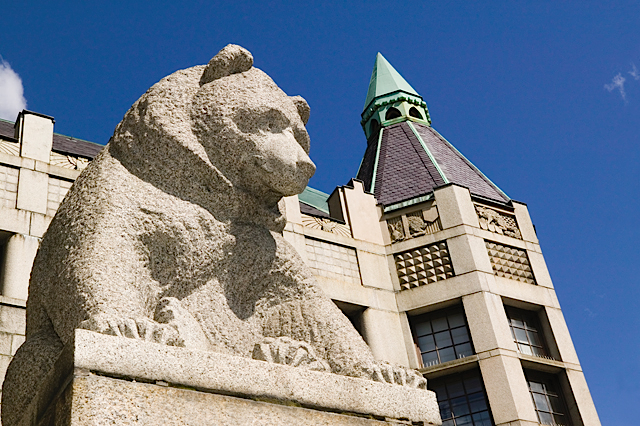 Touring the countryside (Finland is 60 percent forest), it’s clear why, when emigrating, Finns chose Minnesota. Same landscape: birch, pine, lake; birch, pine, lake. Friendly? Sure. But few braggarts here. Modesty prevails. (Joke: When a Finn talks to you, he looks at his shoes. An extrovert? He looks at your shoes.) At Michelin-starred restaurants, patrons arrive in jeans. And in the sauna, naked. Proof of madness: after poaching themselves in that wooden box, they plunge into a frigid lake (yes, I leapt in, too).

Finns have won world championships, from hockey to wife-carrying and phone-throwing, but it didn’t go to their heads; it’s all about nature, not notoriety. For Sibelius, whose wife raised and home-schooled six kids without running water (too noisy for the composer’s sensibilities), it was the birch-pine-lake of Aulanko Park that inspired his iconic “Finlandia.” I’m humming it as we tramp through the forest.

Then off to his nearby birthplace, Hämeenlinna, to tour the home where his widowed mama raised him to be a lawyer (sorry!), starring his piano — later transported via rowboat on his honeymoon; the park bearing his statue; the Sibelius Center with mementoes (CDs to paper dolls); and the Gingerbread House for a Sibelius menu (salmon!). 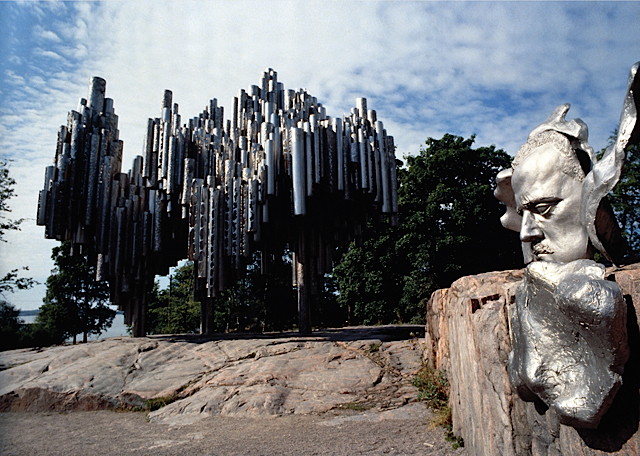 Circling Lake Tuusula by bike, we brake for the Järvenpää Art Museum’s exhibit dedicated to Aino, the Renaissance woman he married: Aino’s own music, a novel she wrote, handicrafts she executed, the garden she adored, the sauna she designed. Pedal on to the town’s Knitting Café for a cuppa and conversation with the locals and shopping ops, like the knitware that multi-talented Aino designed. Back on bikes to Ainola, the couple’s lifetime forest home, and gravesite. (Today it’s also base for a festival helmed by young maverick Pekka Kuusisto, returning to Minnesota with his violin next season.) We tour the self-designed 1902 home/studio of their nature-painting neighbor, Pekka Halonen, then celebrate a Sibelius menu (homemade sausages, herring, and cabbage casserole in starring roles) at the dairy barn-turned-homey-hotel, Krapi Estates, after a torrid smoke sauna followed by an icy plunge.

Then off to Helsinki, hemmed by 200 islands bobbing in the Baltic — another Sibelius haunt. At the luxe Hotel Kämp, in the lounge where he imbibed and puffed cigars for a week at a time (poor Aino), we meet the composer’s granddaughter, Aino Porra, herself a musician with the National Opera. For her, he was simply a playful grandpa. “I didn’t understand he was special. Most important: the love of nature I learned from him.”

We learn more of Sibelius, “the man behind the music,” at an anniversary exhibition in City Hall. We visit his memorial, a (controversial) cluster of steel pipes. We lunch, as he did, at see-and-be-seen Kappeli, anchoring the convivial, park-like Esplanadi Boulevard (where, at a bandstand, a group is singing “That’s Amore” in Finnish). 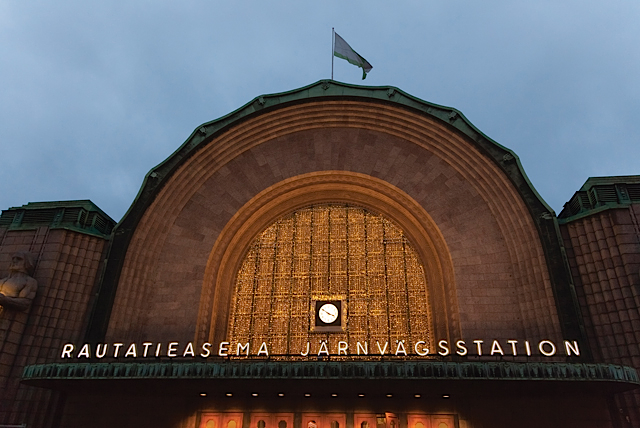 Meanwhile, crane your neck for fashion of another sort — the Art Nouveau buildings of the early 1900s (called Romantic Style by Finns), flaunting curvy balconies and motifs from nature — here a bear, there a pinecone. Then along came the country’s star-chitects, Alvar Aalto (Finlandia Hall) and Eliel Saarinen (Helsinki’s magnificent train station, plus the St. Louis Arch, Des Moines Art Museum, and our own Christ Church Lutheran). Saarinen also designed the castle-like National Museum, livening Finnish history from the Stone Age through Viking times and foreign rule (gawk at the gold-and-velvet throne) — from church art (carvings of St. Olaf, St. Knut) to homespun objects of Forest Finns (birchbark knapsacks, gaily painted horse collars, and ironing boards). The story climaxes at Kiasma Contemporary Museum with its show of Mapplethorpe photography.

Now to the most ecstatic art form — food. Does Helsinki represent dining nirvana? “Hel Yeah,” according to an ad campaign, which delivers on its promise. New Nordic cuisine is flourishing, and without the impossible price tags and waits for a table like the Copenhagen guys who think they own the label. It’s the endearing mantra of local/seasonal: traditional fare but embellished as Granny never imagined. Olo earned its Michelin star with menus starring translucent carrot slices with sorrel granite and housemade feta; cabbage wrapping pork and barley afloat in chicken broth; pike sided with new potatoes, cucumbers and pea puree; then Apple Jack ice cream paired with gooseberry mousse and spruce shoots. Hel, Yeah! 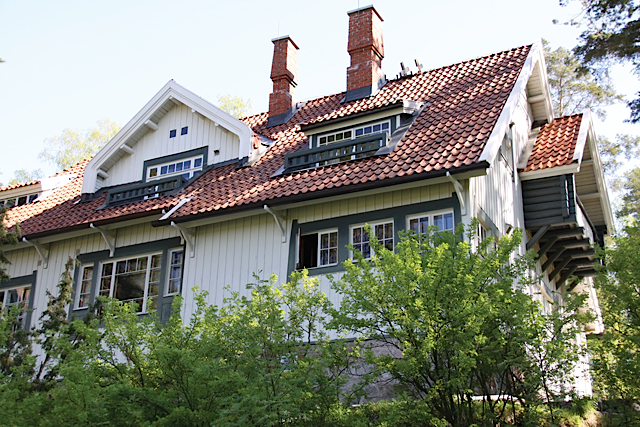 Spis, tiny as a closet, was awarded Restaurant of the Year for its forward prix-fixe menu: amuses of turnip, malt and kohlrabi, tinier than a fingernail, and a tiny Finnish churro with garlic and potato mayo. Next, red cabbage paired with cabbage-as-kraut under a drizzle of mustard; cukes with cottage cheese and garlic mustard sprouts in cucumber foam; carrots three ways: fermented, sweet/sour crumbles, and puree. Then a warm dish: salmon with carrot and parsley root aside a pesto-potato salad; an intermezzo sorbet of spruce tips and pollen; followed by chicken atop wheat-tarragon risotto and pickled hempseed. Finally, rhubarb!

At Juuri, sapas — Finnish tapas — are the way to eat. After an amuse of spring onion soup, I chose asparagus pudding topped with creamy gouda, then cabbage stuffed with barley in a smoked mustard dressing; finally, goose — both liver pâté and sausage in raspberry and sunflower-seed sauce. Dessert? Again, rhubarb!

But Old Nordic hasn’t been discarded, simply refined. At KuuKuu (a recent Helsinki Menu winner), I feasted on creamy salmon soup, followed by meatballs with mashed potatoes and lingonberry sauce. Café Ekberg, looking like nothing has changed since the ’20s, delivered a warm salmon sandwich topped with fried egg, cucumbers, and lots of dill — popular with blue-hairs, sure, and delivered by a pert waitress with half-shaven scalp and blue curls. And don’t forget about breakfast: hotel buffets that just don’t quit (herring at 9 a.m. is easy to get used to).

My room in hipster-central Scandic Paasi boasted red heart pillows and a punching bag (just in case things don’t work out?). It anchors the gayborhood called Kallio and its informal boys’ club, Bear Park. Finnair has just introduced a direct flight from Chicago, so what’s stopping you? For information, see www.visitfinland.com.