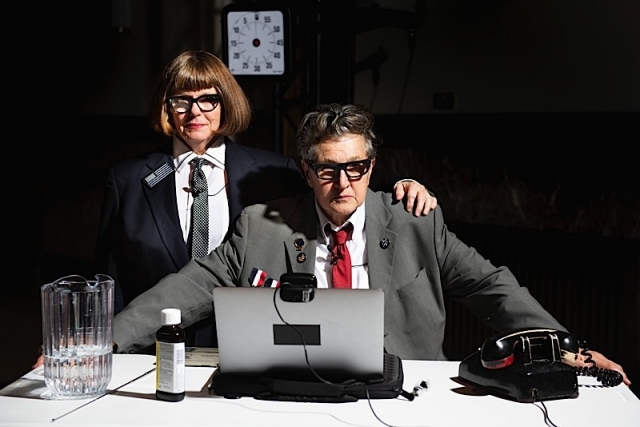 The famous queer-sensible comedy duo, Split Britches, is back in Minneapolis with a satirical makeover of an already satirical film classic, Dr. Strangelove: or How I Learned to Stop Worrying and Love the Bomb. You can catch Unexploded Ordnances (UXO), at the Guthrie Theater’s smallest performance space, the Dowling Studio. It runs as part of the Level 9 series for off-center types of performance work.

Two veterans of the post-’60s avant-garde show they still have the spirit of the Sexual Revolution and its Anti-Establishment credo. Peggy Shaw plays a manically uptight general to Lois Weaver’s precisely composed Madame President. The setting, as in the black and white Stanley Kubrick movie, is The War Room with broad screens of maps dominating the stage area. An impending cataclysm is about to take place and the general is on the verge of hyperventilating over it. The performance is a countdown to that apocalyptic moment. 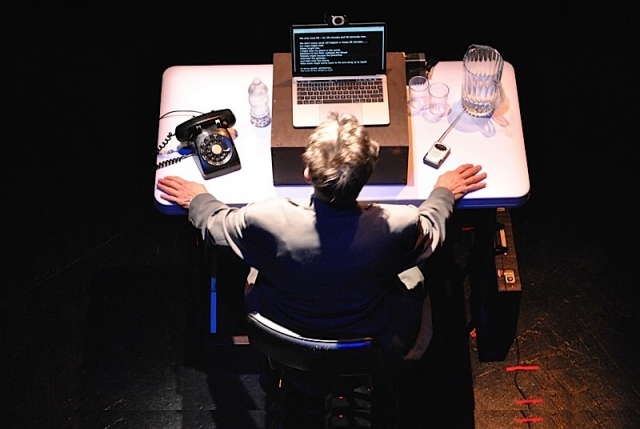 “Ordnance” is a military weaponry term and Split Britches sees our collective lives and culture as racked with metaphorically explosive devices lurking beneath the surface. The performance is heavily invested in the idea that society is ruled by fear and anxiety. To facilitate this thesis the oldest members of the audience are invited to sit at a round table on stage to share such feelings with questions whose answers reinforce that. It was uncanny how the night I attended almost all the “elders” seem to have similar view of society’s status quo. This suited the show’s narrative hand in glove, a narrative which Weaver’s Madame President shrewdly navigates.