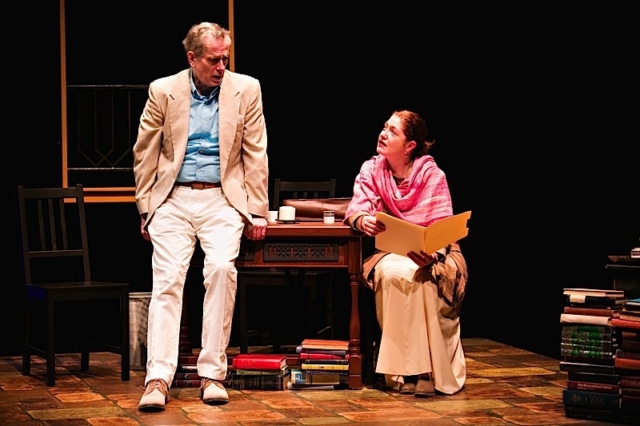 Carolyn Pool delivers a textured and moving title role performance in James Still’s new play, Miranda, at Illusion Theater. As an agent for the CIA, Miranda is driven by personal demons and dons different identities for her work. In Yemen, where the play is set, she directs a community production of Shakespeare’s Othello and probes for information from a Yemeni doctor, beautifully underplayed by Delta Rae Giordano.

Steve Hendrickson and Beth Gilleland play two seasoned middle-aged CIA veterans, worn down by the pressures and tensions, as well as doubts about their true worth as professionals. These two actors bring a depth of anguish to their roles that is simply visceral.

Ricky Morrisseau endears as a young Yemeni actor who contrasts the contemporary situation with resonant comments about and passages from Shakespeare’s tragedy. Miranda is set during the second Obama term when John Brennan was CIA Director. It shies away from commenting too firmly on the controversial drone issues of that time, which weakens its clarity and dramatic potential. Nonetheless, Miranda is an engaging inquiry into the emotional toll of what it is to be a secret agent. Still also builds in a lovely gay element that you’ll have to go see for yourself. Directed with sensitivity by Michael Robins.