“Femmes: A Tragedy” Sparkles and Spoofs at Nimbus Theatre 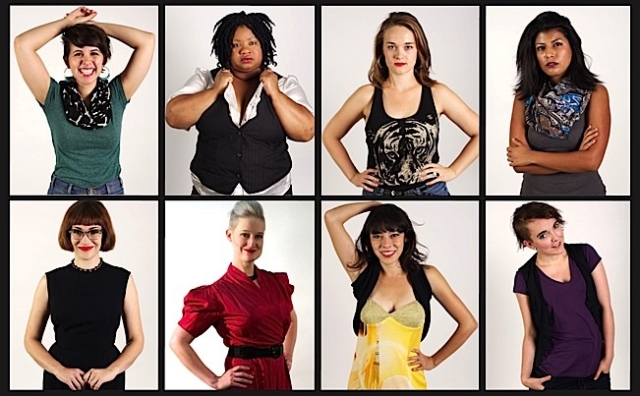 Femmes: A Tragedy, a comedy by Gina Young, centers on a group of female burlesque artists whose competitive behaviors are exposed with dazzling velocity. This contemporary queer re-imagining of Clare Boothe Luce’s 1936 comedy, The Women, revels in the jargon, labels, and terminology of queer theory and the like, so that you are never quite sure if it is spoofing that or taking it is seriously. Under Claire Avitabile’s savvy direction, 20% Theatre’s regional premiere reels in the laughs.

A character named Dexy, marvelously rendered by Dana Lee Thompson, riffs on a butch/femme relationship where the butch just wants the femme to spend some time at home away from the queer scene and its suffocating tendency to swallow up its members. This segment may get to the core of Young’s concerns. Can we overdo the jargon and the habitual need to be with those who identify like us, to the exclusion of intimacy and perhaps even of creating a life beyond gender? Can overly analyzing intimate relationships lead to the destruction of intimate relationships?

Long before the time when the GLBT community chatted about terms like “binary” and “heteronormative,” gay men, lesbians, and those of alternative gender expression faced a comparable dilemma when it came to defining themselves as part of a subculture. Not everyone was happy with the “all or nothing” option proffered and sometimes demanded by alpha activists demanding allegiance. Though some GLBT folks today may be unacquainted with the verbiage of Femmes: A Tragedy, they still may feel an affinity with the butch’s dilemma in Dexy’s riff.