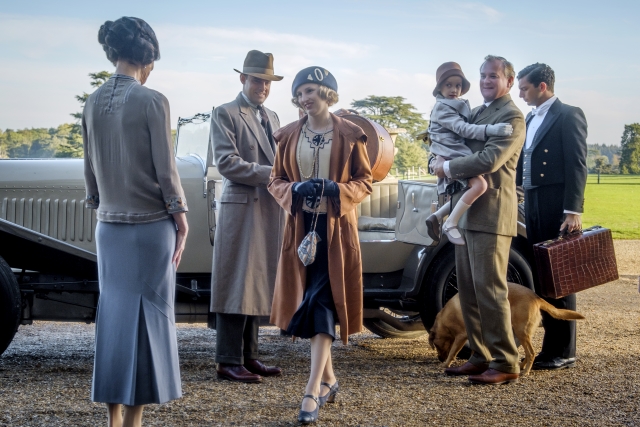 On rare occasions, one sits in a movie theater and from the moment that rare film starts, one is plunged into a new dimension. You’re clearly in the magical hands of a masterly vision. And the great film at hand is most likely a drama. Within that plunge is a powerful use of music. Some classics so launched include The Godfather, The Sound of Music, Tess, Nicholas and Alexandra, and Wyler’s Ben Hur. Obviously, these are all from the distant past. But one new film actually takes a comparable beautiful plunge right from the millisecond it starts with evocatively pensive music by John Lunn and transports us. In this case its England in the decade after World War I. The film is Downton Abbey.

If you’ve never seen a single episode from the watershed television series, don’t worry in the least. The film unfolds in its own individual way, complete with great self-contained plot lines.
If you do actually know the series, either sporadically or devotedly, you will experience a new focal point not dealt with on the tube.
-That said, to devotees, your familiarity with those many indelible characters played by the same memorable actors will steep you into its mesmerizing atmosphere once again.
-If you don’t know the characters, or about them, it’s not a problem. Their essence is vividly drawn. You’ll “get it”, as they say. Each and every performance grasps the highly specific protocols of the time and place, and how those compelled people to behave.
Downton Abbey’s Core Feminist Struggle
The concern at root of the Downton film is the future of the Crawford family estate. Will Lady Mary, played by the magnetic Michelle Dockery, resolve herself to carry on the family legacy or not? This is quite something in the 1920s when manors were run solely by patriarchal power rather than by a woman. Moreover, creator and writer Julian Fellowes respects his audience so much that he impels us to struggle ourselves along with Mary as to whether or not this legacy is actually worth continuing or not. Yes, Downton Abbey makes a demand on its audience. And that’s always a good thing.
What’s especially notable about Fellowes is that his well deserved Oscar-winning screenplay for the 2001 masterwork, Gosford Park, directed by Robert Altman, was a full-throated indictment against the English class system, albeit set in the 1930s, when the class system was still nonetheless in place to a great extent. The decadent excess that film portrayed was legitimate, blunt, and well conceived. But frankly it was not controversial. The decadence of the hyper-privileged is a long known quantity.
In the following decade, the 2010s, Fellowes developed the extraordinary television series about another manor, known as Downton Abbey, occupied by the Crawfords, a non-decadent family. Like all human beings they had their imperfections but not to extremes of Gosford Park. Moreover, a household with numerous servants, like all of us, cannot escape human nature. Therefore, inevitably numerous instances of human fallibility and dark secrets unfolded for its six seasons.
Now Fellowes has crowned his Downton opus with a cinematic film set in 1927 which directly employs the same cast and characters just in the nick of time before they’ve aged away from close recognition or life itself. For the film, Fellowes creates an occasion not seen in the series—a royal visit from the King George V (Simon Jones) and Queen Mary (Geraldine James). The dynamics between the Crawfords’ staff and the regal entourage are utterly fascinating in their imposed submission and imperious dominance. A classic take on how those associated with power can use that to denigrate those not associated with power.
From within the entourage springs one of the film’s core conflicts in the form of Lady Maud Bagshaw, the Queen’s lady-in-waiting in a compelling performance by Imelda Staunton. You may recall that many legitimately felt she was robbed of the Oscar for the 2004 film, Vera Drake. If you saw that great performance you’ll surely be struck by the stark contrast conveyed here. Staunton at Downton is the very picture of hard won dignity.
That said, if anyone wins an Oscar for Downton Abbey, my choice would be Maud’s enemy, played by the incomparable Maggie Smith as Violet. When Mary’s grandmother, Violet Crawley, Dowager Countess of Grantham, i.e. the grand matriarch of Downton Abbey, realizes Lady Bagshaw is a relative she has lost touch with, she becomes transfixed with the fear the lady-in-waiting surely must out to steal away the family fortune. However, not to be a spoiler, the Dowager is ultimately constrained toward an unexpected level of consciousness. It’s one the film’s, as well as one of Smith’s, goosebump moments. (What a woman!)
Throughout both the series and the film, the Dowager Countess is a steel trap who tenaciously upholds tradition even if it means pain to herself and others. Like her or not, this matriarch is unflaggingly consistent. She’s easy to despise, but on a profound cellular level she—and I suspect Fellowes too—understands if tradition is ever rooted out, what follows could well be catastrophic. Perhaps this is Downton Abbey the film’s implicit universal warning. 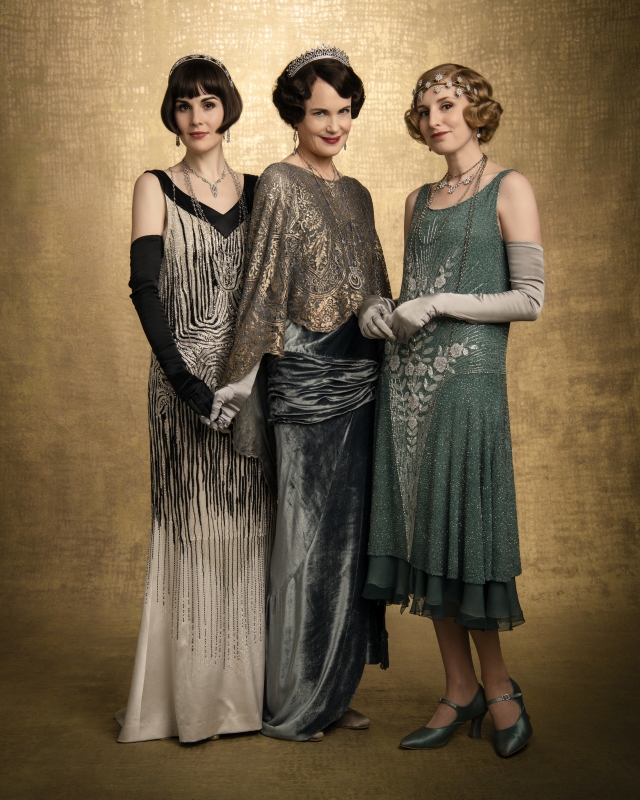 The gay subplot, played poignantly with brittle vulnerability by the dashing Robert James-Collier, is a breathtaking reflection of the severe suppression of homosexuality as it manifested at the time. Even the homophobic viewer will likely see the unreasonableness and the injustice about an insidious sting operation. Such an operation is emblematic of those which have historically victimized gay men. We see the machinations involved in such coldly orchestrated treachery. The subplot fits organically into the multiplex web of relationships portrayed so meticulously throughout the film. Today’s queers get a chilling look at what our kind once endured. It’s neither embellished or inflated with political jargon or overt commentary. It simply shows it as the nightmare it was, and still is, in parts of the world.
So much can and will be said of all of these characters and relationships so absorbingly directed by Michael Engler. The subtleties of these are captured by Ben Smithard’s captivating cinematography refined by ingenious editing by Mark Day. The gorgeous majesty of Highclere Castle, the location used for the manor, enhances the stunning period look and the detail of Anna Mary Scott Robbins’s marvelous costumes. As one would expect, all these elements and more serve to propel Downton Abbey to cinematic greatness.
*The European aristocracy of which the British aristocracy was connected with (and some may say, still is in some cases) suffered a near monumental breakdown because of World War I. The Downton Abbey series reflects that and it is implicit in the film as Mary grapples with the legitimacy of family legacy itself. Historian Barbara Tuchman examines this in The Proud Tower, as well as the onset of that war itself in The Guns of August, which President John Kennedy insisted his aides read. Iconic cultural observer Joan Didion writes that just before her writer husband, John Gregory Dunne, so abruptly died, he said “World War One was the critical event from which the entire rest of the twentieth century flowed.” Downton Abbey is at the headwaters of that flow.
Downton Abbey
Area Movie Theaters
www.downtonabbeytickets.com