Tierney Houdek talks about her lifelong calling as a fashion designer and what she offers to those looking to tie the knot.

You can go all the way back to Tierney Houdek’s time as a kindergartener to understand that a life of creating fashion was in the cards. Recognized by her parents for her love of weaving in her Montessori school, Houdek was gifted with her first sewing machine at age 10. What started as creating gifts for her friends as a child turned into a penchant for full-on fashion design in high school, even though Houdek wasn’t so sure it would turn into an actual career.

“I thought I would be in the humanities and doing therapy due to my strong internal calling to help others,” said Houdek, who resides in Minneapolis. “It was 2012 when I realized I was only fighting against nature by not pursuing fashion, because I just couldn’t stop making things for people. I was taking on exciting costuming jobs, and doing things like conducting the pattern development and all things garment construction for my friend Ashley Hane’s launch of her clothing brand ‘Three Letter Acronym’ (T.L.A. Press). It was just too obvious at that point that I am a designer. and this is my path.” 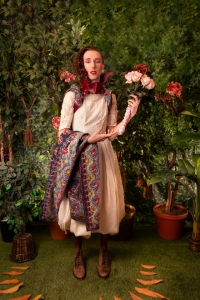 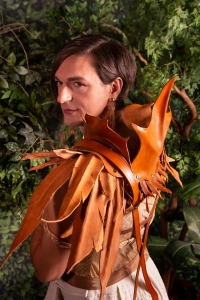 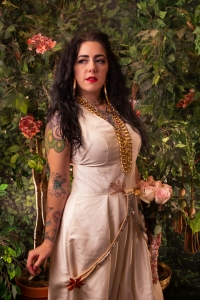 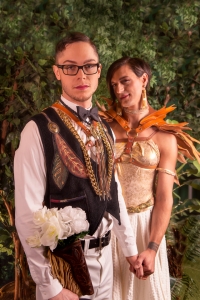 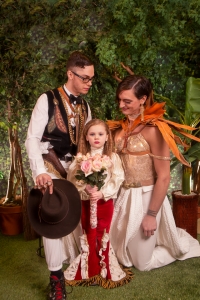 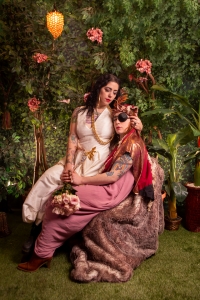 Ultimately, this path has given Houdek the opportunity to give people a means of engaging in self-expression through her clothing.

“My screen prints have given me the opportunity to share messages of mindfulness and radical acceptance, which is my current avenue for spreading peace and helping people through art,” said Houdek.

Enter Thraxis: Theory In Practice, Houdek’s clothing brand. Houdek admits that her personal design style is a bit of a mixed bag, ranging from urban-styled streetwear to high fashion work. She describes her work as “punked-out goddess wear”: tough but eclectic, and approachable to many.

Thanks to this versatility in style, Houdek’s design acumen lends itself quite well to the world of wedding fashion, especially for those getting married who want their nuptials to not be as vanilla or conventional as usual. And for the local GLBT community members who want to include such clothing choices into their big day, they’ll be happy to know that they have a kindred spirit in Houdek.

“I have identified as queer since age 13; when I came out to my best friend as bi, she said, ‘Yeah, duh. Are you just realizing this?'” said Houdek. “Then I found this awesome high school in Saint Paul, Avalon School, where I was able to step into a leadership role with the GLBTQ Alliance and was co-president in my junior year. We held numerous events to fundraise for the cause of educating people on ending the oppression the GLBT communities face in high schools.

“I am very proud to say that we won a national award for being the most active high school GLBTQ Alliance that year,” Houdek continued. “I especially enjoyed hosting community teach-ins on gender topics, as well as group discussions geared to create judgement-free environments in schools in the Twin Cities. I am just always trying to encourage people to accept their beautiful selves and love one another.” 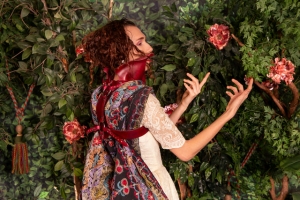 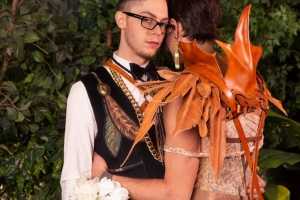 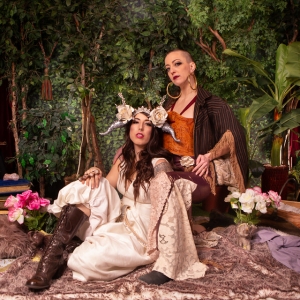 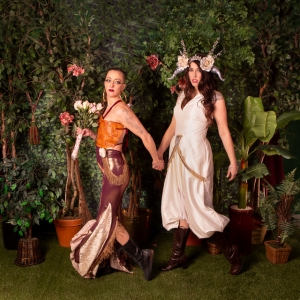 That encouragement of positive self-expression shined brightly when Houdek crafted a showcase of her fashion work for Lavender. She noted that while the design choices she made were geared towards an alternative market, she observed that what was once considered “alternative” is now becoming more mainstream.

“There is a true renaissance happening of people taking back what is special, increasingly more often throwing social norms and past traditions to demonstrate what they truly value,” said Houdek. “So when designing ceremonial wedding attire, I did not feel one bit shy to embrace my harder edge and bring some really strong ‘alternative’ personality to these looks. I have many friends and clients who have told me that they don’t want to wear traditional white at their wedding and instead would rather wear something that’s sentimental for other reasons, or a color that is more indicative of their day-to-day taste.”

“I themed each look after the leather designs for the carefree, liberated couple who is unapologetically themselves,” said Houdek. “Bold but classy, hard and still soft, and casual while still proud and sentimental.”

Houdek also jumped on the chance to incorporate the back-in-fashion jumpers to her design palate, allowing for some delightfully gender-bending design options. But Houdek also wanted to complement the alternative with the traditional.

“Just because we are alternative doesn’t mean we don’t still include our little flower girl, for example,” said Houdek. “I still chose plenty of white to keep the experience rich in honor, and the other colors chosen are also historically royal and prestigious.”

Houdek hosted the shoot at the MCN 6 television station, with photography spearheaded by Jade Patrick. Houdek said that the camaraderie between the stylists, sewing staff and models was nothing short of serendipitous.

“Mika Jugovich and Jesse Pollock are my two gender-nonconforming-identifying beauties who we were instantly captivated by on set,” said Houdek. “Daniel Daigle, who models for my streetwear line regularly, has a background in acting and is able to nail any role I give him. Kristen Shaw models any pose easily, as an acrobat performer and the owner/coach of an aerial and acrobatics studio called Stomping Ground, in downtown Minneapolis. Kelsey Schweikert and Natalia Dawn Padgett modeled and were my super creative hair and makeup team for the whole cast. Cora Birnie is only four years old, but no newbie when it comes to being on point in front of the camera and was the sweetest little flower girl to work with.”

Houdek herself even jumped into the modeling fray for the shoot, with her entire team of models displaying the full gamut of what a bodacious Thraxis-themed wedding can look and feel like. And the best is yet to come, such as a spring lingerie line set to launch in mid-April.

“The future of Thraxis Threads, and my work as a designer, will consist of more of my favorite thing in fashion: taking on the challenge of conjuring garments that are capable of presenting a powerful attitude for the wearer and are also staples you can’t live without,” said Houdek. “I make clothing for people and always want to bring people together, so I will continue to strive for practical yet playful designs that unify us while still giving people individual expression that we all need.”