Fashion History to be Proud Of

Thinking about the history of fashion, there are several names that come to mind. Maybe they are brands that you wear, brands that you covet, or brands that you see in magazines or ads. Sometimes, brands are associated with people we know, or know of, like Isaac Mizrahi who always seems to be on TV in some format or another, or Ralph Lauren, who turned his look into a lifestyle and we see his houses in Architectural Digest and him and his wife in the society sections of magazines or the paper. What is interesting, is that the GLBT community has always had a huge influence in the world of fashion, and we should be proud to recognize these people behind the brands as a part of our community. 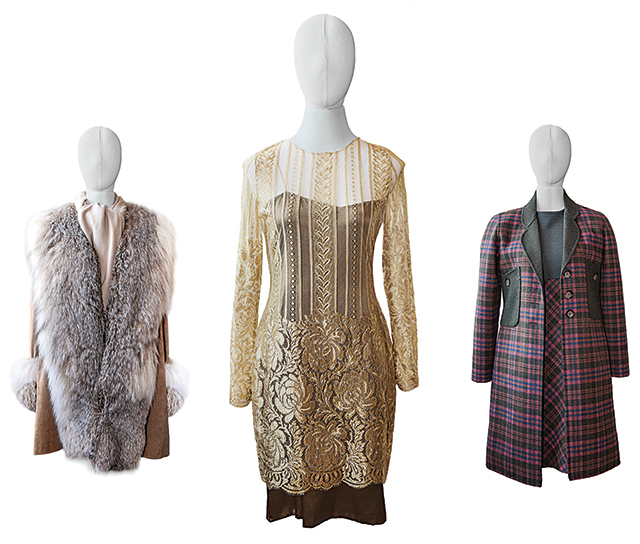 In historical fashion, there were many more male designers, so finding a lesbian in historical fashion is more difficult, but certainly not impossible. In fact, the biggest name in fashion was known to have many female lovers, some of whom were quite famous, but since her brand is still very strong, and the owners are quite litigious, I will only say that the next time you put that quilted bag on your arm, you know the one, with the braided leather and chain strap, that you are carrying the bag of our history.

The first designer I think of when I think of designers to be proud of is Rudi Gernreich. Rudi brought a sense of modernity to American fashion in the 1960s; he was one of the early adopters of the idea of women’s American sportswear, separates that mix and match to create a unique look, rather than pieces all being made to match exactly. He was a dancer in an earlier life, and was very interested in the motion of clothes rather than how they looked standing still. This idea was groundbreaking for the time, the idea that clothes were to move and be free. He took the boning and seams out of the dresses so that they would flow and move and not have the rigid corseted look of seasons past.

He loved futurism, and frequently had designs of plastic or vinyl in his collection. He is most notorious for creating the monokini, a bathing suit that exposed a woman’s breasts and had suspenders to accentuate the bare skin.  He was also an early adapter of androgyny and unisex clothing, showing boxy apparel for men and women and having them shave their heads to look genderless.

The main reason, however, to be proud of Rudi Gernreich, is that he was a founding member of the Mattachine Society, one of the earliest gay rights organizations. Rudi was lovers with Harry Hay, founder of the Mattachine Society (and later, Radical Faeries) and was one of the original members. Even after Gernreich and Hay ended their relationship, he was an avid supporter of the organization and continued his support until he died in 1985.

Why should we be proud?  He was at the beginning of the gay rights movement.

Another designer that is totally on the radar is Mr. Blackwell, the Paul Lynde of fashion. Mr. Blackwell started as an actor in Hollywood; in fact, he was born Richard Selzer and was given the last name “Blackwell” by Howard Hughes when he signed a movie contract. After a few years as a minor actor he started making clothes for his friends, actresses like Jayne Mansfield and Mae West. He made clothes for very wealthy socialites, selling his dresses in the ’60s for upwards of $1,000. He is unique in that he was one of, if not the first, designers to make clothes for plus-size women, making his clothes available up to size 46, shaping the dresses to accentuate the woman’s curves. The New York Times wrote in 1963: “When he designs a dress, he thinks about how a woman wants to look across the table.”

His brand, House of Blackwell, closed in the 1980s, mainly due to a shift to casual dressing, but also a victim of his success as a celebrity critic. The public knew of him mainly for his best and worst dressed list that came out every January, and unfortunately, so did his customers, they thought of him not for the glamorous and glitzy clothes, but for his sharp tongue and quick wit. I can’t go on without mentioning a few favorites:

Paris Hilton: “Paris’ ‘designer’ is obviously on vacation? This is one Hilton that should be closed for renovation.”

Meryl Streep: “She looks like a gypsy abandoned by a caravan.”

Mary-Kate Olsen: “She resembles a tattered toothpick trapped in a hurricane!”

Why should we be proud?  He used his talents in fashion to teach the world about camp!

Thinking of designers that make us proud, we have to, have to, have to, mention Halston. Roy Halston Frowick went from Iowa to Manhattan and never looked back. The ’70s are defined by the look of Halston: modern, minimal, and chic.

Halston worked in NYC making hats at Bergdorf Goodman and designed the pillbox hat Jackie Kennedy wore to the inauguration. Several years later, he was backed by one of his customers and launched his eponymous clothing label in 1969.

The ’70s saw Halston’s rise to superstardom; he created soft flowing dresses and removed all the extra details such as buttons and bows so that the clothes would appear architectural and minimal. He popularized chiffon dresses and, of course, ultrasuede, a fabric that would become his signature. He became close friends with Liza Minelli (swoon) and the whole Warhol set being a mainstay at Studio 54 in the latter part of the decade.

To say that Halston was a superstar was an understatement. Women’s Wear Daily called the ’70s “The Decade of Halston.” Halston appeared in magazines with his glamorous pals being Halston, never hiding his sexuality or pretending to date any of his chic cohorts. Believe it or not, there is even an episode of The Love Boat with Halston as a guest star.

Halston’s star fell in the 1980s when his brand was sold to J.C. Penney and the luxurious stores, like Bergdorf Goodman, who had carried his clothing since its inception pulled the brand off their floors. Sadly, Halston died in 1990, of AIDS-related complications, and never saw the renaissance in the look he created.

Why should we be proud? Halston never shied from being gay and the world saw him as fabulous. This even extended to his death; his family was open about him dying from AIDS at a time when the mention was still taboo. The statement read “We think it’s best for all concerned to know the reality. We profoundly hope it has a positive impact on the public.”

Finally, while there are so many to pick from, I have to choose one more and the decision is easy: Bill Blass.

Bill Blass personifies the idea of power dressing. First ladies, celebrities, and movers and shakers flocked to Bill Blass for wearable feminine fashion that had a look of luxury and power. His clothes radiated elegance and style, and defined the look of the socialite.

Mr. Blass was the son of a dressmaker and, at 17, moved to New York City to study fashion.

When he was 20, during WWII, he enlisted in the army, and was part of the 603rd camouflage battalion. The 603rd battalion was the visual part of the Ghost Army, a legendary unit that deceived the German army into using resources and luring them away from actually allied bases. They created fake army bases and used inflatable tanks, jeeps, and airplanes to create the effect of a 30,000 man force.

After the war, Blass went to work in the garment district and in 1970 launched his own label, Bill Blass Limited. Doing this, he was the first American designer to print his name on a fashion label. The label quickly became synonymous with luxury and wealth; many significant ladies of the time selling out trunk shows and wearing Bill Blass to every event. He even began working with Ford in 1976 for the Bill Blass Edition Lincoln Continental.

Expanding his brand beyond sportswear to chocolates, swimwear, furs, and furniture, Bill Blass used his creativity to champion the American fashion scene. He was a founding member of the Council of Fashion Designers of America, the CFDA, and was a generous donor to GMHC and the AIDS care center at New York Presbyterian. While he was quiet about his personal life, he was an active donor and fundraiser for AIDS-related charities when most people were still very quiet about AIDS.

Why should we proud?  Bill Blass showed the world great taste and impeccable manners, but more importantly he used his creativity and style to help the community and the world.

There are so many more designers that are worthy of conversation: Patrick Kelly and the Chambre Syndicale, or Willi Smith and Williwear, Gianni Versace dressing Hollywood, or Perry Ellis (oh, Perry Ellis), or Madeline Vionnet loving women “a little too much.” The list goes on and on, and we are the lucky ones for that, for as we stand strong and proud today, we still have some very big (and very stylish) shoes to fill.

Patric Richardson is the owner of Mona Williams, a designer and vintage consignment boutique in northeast Minneapolis.