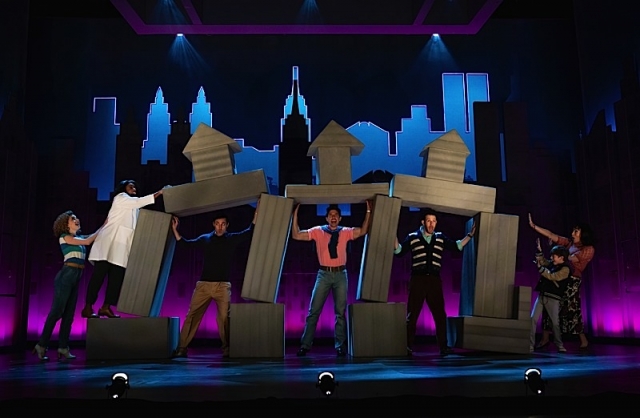 “Imaginatively innovative with richly drawn characters” could surely have been the view of those who saw Falsettos when it opened in on Broadway in 1992. The very same can be said of its 2016 Tony-nominated Best Revival now at the Ordway. However, what’s almost mind-boggling is in seeing the William Finn & James Lapine musical a quarter century later, is that it seems to stand taller than the two other works that came and remain to hold the status as the so-called “milestone queer stage achievements” of the same decade: Tony Kushner’s Angels In America dyptich and Jonathan Larson’s Rent. But thanks to Lincoln Center, Falsettos was revived, providing an opportunity to reassess the nature of “greatness” in queer theater. This simply staggering production on national tour, actually directed by Lapine, plays at the Ordway.

What perhaps stands out in Falsettos, which is ultimately very pro-gay, but with qualifications, is that the straight wife of a suppressed gay man who comes out is clearly portrayed as the injured party. There’s no vacuous justification that her life and that of their son being turned upside down, was excusable collateral damage in the service of the greater good of gay equality. There’s no rainbow flag grandstanding that Marvin had a right to be himself! and that coming out is tantamount to being born again, therefore, “Hey! Now I know it all!” and “Oh! What courage that must have taken!” 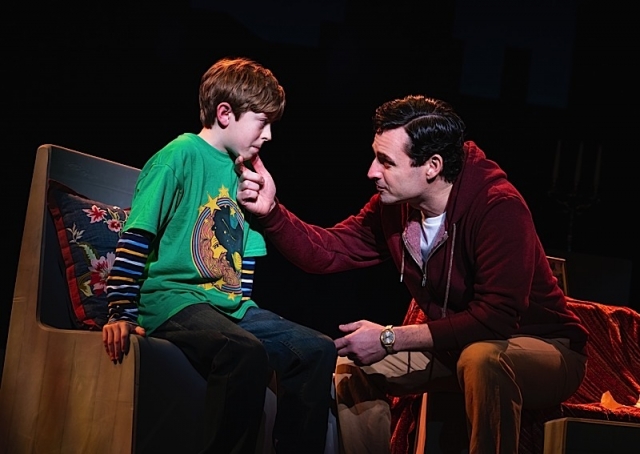 In Falsettos, actions have consequences. Accountability has no sexual orientation. Life is often a struggle. Welcome to reality, folks! One wonders if a good liberal rabbi was whispering in Finn and Lapine’s ear, warning us that as we enter this brave new world where queerness is included, we must be careful and humble, as we weave its threads into the fabric of our civilization. The opposite of Tony Kushner’s Angel character who hectors us to strident social justice activism instead of inner reflection. Also, it’s clear that Finn & Lapine understand Judaism, whereas Kushner’s general take on Mormonism could easily stand in for any number of Christian views. Ironically, Mormonism is widely held to be something apart from Christianity: a dimension unto itself. But Finn and Lapine have created from what they know and it shows.

Falsettos actually went through developmental phases for several years via shorter musical works for over a decade. Given that these shorter works reflected their era, we see the late 1970s, sometimes called the post-Stonewall period, as it shifts into the very different AIDS crisis of the early ’80s. Therefore, when they were synthesized in 1992 to become the Best Musical Tony-nominated Falsettos, a deeply sourced sweeping work from an unabashed Jewish perspective was conjured from the void.

Whether its creators consciously realized it or not, their Falsettos was a rebuke to the identitarian insistence that all views expressed about the marginalized must be favorable ones. Perhaps they were unwittingly prophetic. The musical demands that we listen to those with traditional conservative values rather than dismissing them as mean-spirited or ignorant, ipso facto. We have to live and get along with our fellow humans, as difficult as that sometimes is. 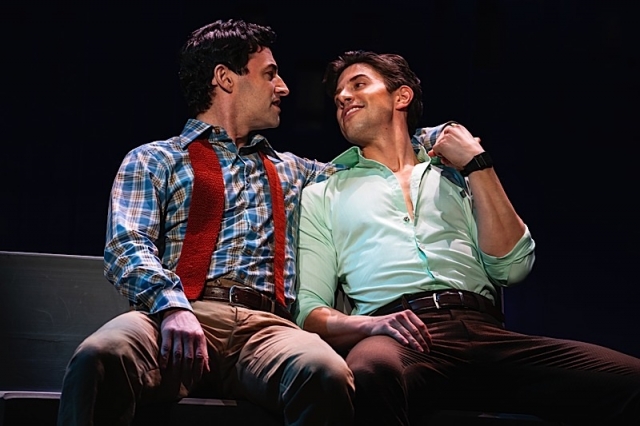 Finn and Lapine do not render their gay couple, Marvin (Max von Essen) and Whizzer (Nick Adams), as models of virtue. Protagonist Marvin is married to the dutiful and nurturing Trina (Eden Espinosa) who needs on a profoundly spiritual level to maintain a home based in traditional Judaic values. She’s no Friedan/Steinem feminist, nor is she a puritanical stereotype. In fact, she’s a lovely warm blend of the maternal and the sensual. Unfortunately, Marvin’s homosexuality does not match up with that. Not knowing one’s self thoroughly enough before marriage can have ramifications.

Observing this is their cynical 12-year-old son, Jason (Thatcher Jacobs), who judges his father harshly, not for being gay, but for his shabby treatment of his mother. Ironically, Jason and Whizzer ultimately hit it off and seem to kindle something like a healthy favored uncle/nephew connection. Gay and bisexual men should thank Finn and Lapine for modeling this as we go forth with new definitions of what a family is. 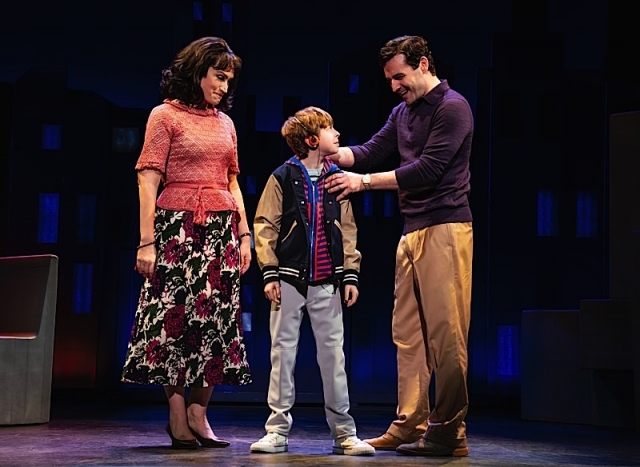 Fatefully, the family psychiatrist—a late 20th century urban Jewish trope itself—Mendel (Nick Blaemire), comprehends the inner beauty and strength of character that are Trina. Another twist of fate is that for all intents and purposes, Jason becomes their matchmaker of sorts. At the time of Falsetto’s development the psychiatric elements of Jewish filmmakers Woody Allen and Paul Mazursky were widely resonant in broader culture. Falsettos toys with the question regarding the cerebralism of “the shrink” replacing the ancient wisdom of the rabbi and the cleric.

In the second act, Mendel and Trina have found mutual contentment but Marvin is facing the damage of trying to control the feral and borderline narcissistic Whizzer in the way he controlled the selfless Trina. That said, handsome Whizzer is a paradox. Though absorbed with a need for nice clothing, he is semiconsciously drawn to the stability in handsome Marvin’s application of traditional gender roles onto their relationship. He resists, yet like “a moth to the flame” seems to want Marvin to be the proverbial “man in charge”. 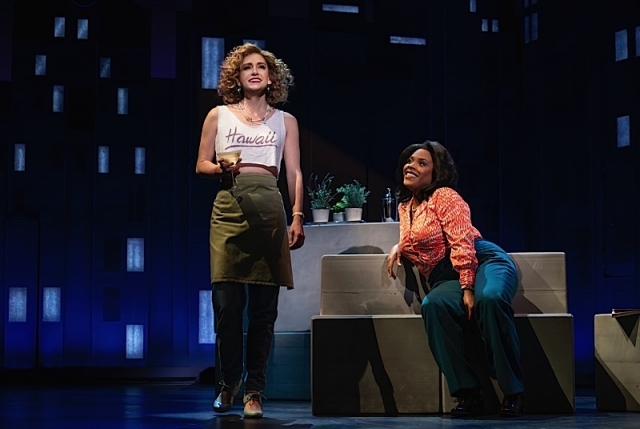 A similar dynamic appears in Act II with their neighbors, an interracial lesbian couple, Dr. Charlotte (Bryonha Marie Parham) and Cordelia (Audrey Cardwell). It’s this pair who starts singing Something Bad Is Happening which ominously announces the burgeoning AIDS epidemic. And they’re utterly haunting as they sing.

As the rest of the musical unfolds, its view of life on earth might be compared to struggles of Job in the Old Testament reset in contemporary terms for all characters. Not only because of the AIDS cataclysm but because of all the psychic wounds inflicted among the characters prior to that. Why does God not come to our aid? Is there really a God? Why is he so silent?! Why do bad things happen to good people? Is there any point in a boy even having a Bar Mitzvah? Yet for all that doubt, unlike Kushner or Larson, we must bear our burden, behave ethically, be accountable, resist the compulsion to blame others, and somehow keep faith. “Raging against the machine” doesn’t necessarily lead to good results anyway.  In Finn and Lapine’s world, characters such as Larson’s sympathetic characters ripping off an ATM to escape New York and flee to Santa Fe and blaming Reagan, which Larson and Kushner each implicitly and explicitly do, is not an option.

Granted, Falsettos takes digs at Reagan and the conspicuous consumption attitudes of the ’80s, but they don’t dominate or permeate or get out of hand. Humans, whether they’re rich and privileged or not, have some choice of free will in a free society. A society they’re lucky to live in. Politics and low social status can definitely be contributing factors to bad behavior and have been the gist of great drama. But again, there are consequences which play creators with insight make known to the audience.

This applies to lyrics as well. Lyrics are probably never an ideology-free zone. Falsettos’s tunes are just as beautiful as Larson’s marvelous and sometimes gorgeous Rent tunes, but Finn and Lapine portray complex human struggle rather than the prolonged blame and defiant rage of Larson, as justified and as beautifully and wrenchingly composed and lyricised as those may be. 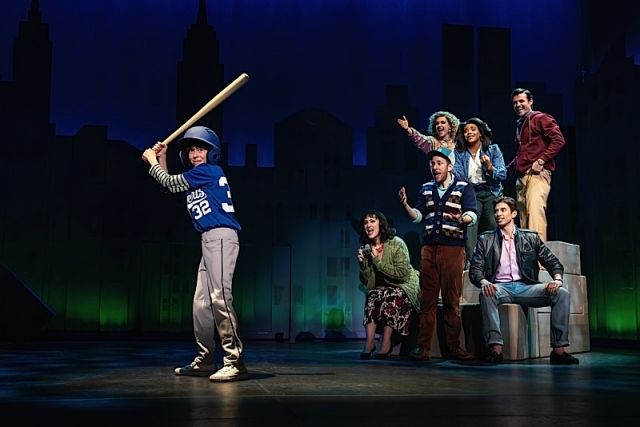 Every single performance in the Lincoln Center tour is beyond terrific. The musical’s very human characters’ arcs between the two acts range so that we get to know their personality layers and how they respond to things at a deep level. Humans are complex. Therefore, we see them in a totality rather than black-and-white. The same can even be said of the lesbians, wisely portrayed by Parham and Cardwell, who appear only in Act II.

The vibrantly earthy Blaemire compels us to understand the difficulty of a straight man yearning for the right woman but never seeming to find her. The need for a soul mate is common to all sexual orientations. He seriously questions his own emotional maturity, which regrettably the gay Whizzer has failed to do; which Marvin does at great expense. Adams bravely elicits that hard truth and is a reminder of the wages of AIDS in the 1980s.

Trina’s Song, sung with soaring magnificence by Espinosa, conveys something that conservative women actually do understand, contrary to stereotypes their detractors proffer. Trina, as the brazen lyrics attest, completely understands that confident men can be difficult, obnoxious, petulant, and yet can be maddeningly attractive, endearing, and not to mention, protective. Yes indeed, coming to terms with masculinity can indeed be difficult. Women and gay men can go on at length about that. Better yet, Jewish scripture made us painfully aware of that millennia ago. Espinosa also shines with passive-aggressive flair in the hilarious I’m Breaking Down where Trina chops away at phallic-looking produce in her kitchen. 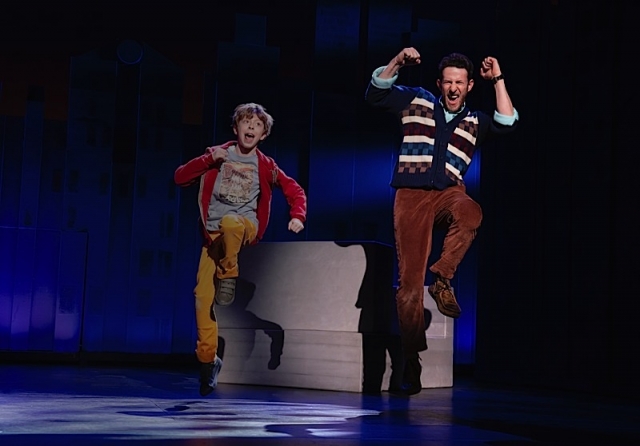 Von Essen’s rendition of What More Can I Say? is utterly soulful as sung while sitting up, bare torso, in bed as the also bare torso’d Whizzer sleeps beside him. A darling image that contrasts the sexual compulsions that were tragically central to the AIDS crisis. One assumes underneath the sheets they’re both naked and that at this point Marvin is at peace with himself—and Whizzer the same. Mutual harmony sometimes is hard won. Though the musical is peppered with lovely moments of male affection, this scene achieves the grace and stature of classical art, a nod to the West’s subliminally homoerotic sensibility and the Bible’s call to care for others unconditionally. This gay couple seems to ultimately reach a point of mutual unconditional love.