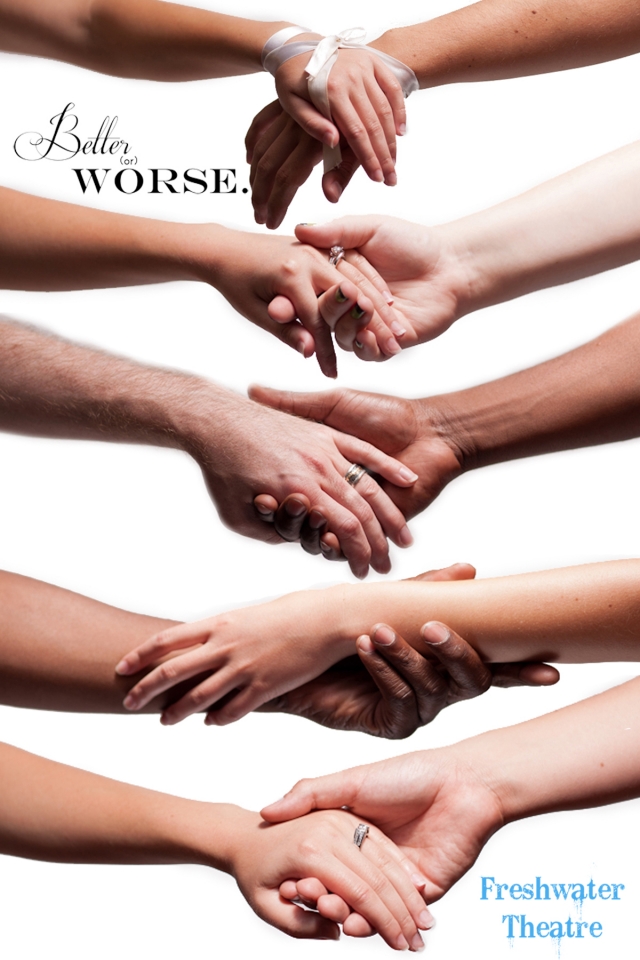 The Freshwater troupe has mounted various short plays and shorter readings from texts from various religions, as part of a mind-blowing showcase about how American marriage is manifested, shaped, and revised, at the Nimbus space in northeast Minneapolis. This grouping, called Better (or) Worse, crackles with insights ranging from non-monogamy, to becoming a child with two moms, to the effect of war on marriage, to the essential ownership of women at the end of the pioneer era, and then some! The Standing on Ceremony: The Gay Marriage Plays, much touted nationally over the past year, is inferior to Freshwater’s more multilayered and provocative presentation. Though they’re more hetero than homo, audiences are challenged on a much deeper level about the illusions we have about marriage to begin with. Compared to Standing on Ceremony, Better (or) Worse is actually more subversive. Proceeds go to Minnesotans United For All Families.

From the perspective of craft, Better (or) Worse is a remarkable example of very short works that develop characters with real dimension. The playwrights prove it can be done. And there’s nothing slapdash about any single one of the offerings. Also, the fact that straight and gay issues are all a part of the experience makes for a fuller picture of the marriage institution itself. What’s more, you can’t help but be somewhat reflective about the destructive and affirmative power and place of desire in marriage when you leave the theater.

That streetcar is pleasingly and honestly presented throughout the showcase. The saucy   Does This Look Gay on Me? co-created and performed by by Ariel Leaf and Briana McNamara peeks in on two easygoing bosom gal pals who discuss their bisexual nature and their commitment to heterosexual marriage while trying on clothes. Director Emilia Allen gives it a light touch with a deftly elusive performance by Lacey Zeiler as a sales clerk. Just what is she thinking and feeling? An interesting discussion point for after the show.

Shannon Troy Jones and Elizabeth Olson are simply breathtaking as a married couple whose swinging practices with other couples and individuals has brought up guilt on his part and a sort of existential joy on hers. Titled Since the Kids are Gone, playwright Michael Long daringly and beautifully examines the complexity of open marriage with an open ended lack of judgment. Directed with depth of feeling and captivating stylized hand and arm movement by Nora Sachs. (Long should develop this into a full length play.)

In stark contrast is Poplin. Playwright Ruth Virkus has achieved a splendid period piece that has been realized with an exquisite historical sense by director Cassandra Snow’s cast. Denise Baker and Kari Elizabeth Kjeldseth are two wives, of different classes, in which the wealthier one actually has markedly less financial freedom and freedom of mobility than the other. This irony is performed with devastating, yet underplayed emotional power. With vivid support from Jim Bitney as the shopkeeper, we are transported to a rural small midwestern town, 1903.

Rachel Flynn’s endearing monologue, Second Wedding, portrays an adolescent girl happy about navigating the family and social dynamics surrounding her mother’s marital plans with another woman. Technically, it’s terrific in that it’s always a feat for a grown woman to pull off playing a child. And Flynn pulls it off. Moreover, she is touching in her evocation of the girl’s precociousness. From an audience’s adult perspective we know this innocent is now subject to the prejudices of homophobes who reject same sex marriage out of hand. Therefore, we wonder how much ignorance this darling girl will have to endure after the wedding.

Josef Buchel also shines in a monologue, but in the way a dark crystal shines. This magnetic young actor plays a man sitting in a bar, grappling with guilt over an adulterous affair in homeWrecker by Anonymous. Buchel shapes a brilliant paradox as a man who is on the one hand, almost delicately sensitive, and on the other, subtly coarse. The character is one of these men who, despite his obvious intelligence has yet to really examine the complex nature of sexuality. He cannot even see that he’s unconsciously run by that all too common tendency of slut-shaming. A tendency that of course, gets focused on women, but frankly, it also does damage to the person doing the shaming.

A marvelously witty Alexis Clarksean renders a fabulously bitter portrayal as a woman deceived into marriage and motherhood by her husband. Jason Rainey’s delicious comedy, Schadenfeude, addresses the problem of staying stuck in a high school mental construct years after graduation.

Rachel Austin gives a brave and poignant performance as young woman dealing with the pyschological effects of breast cancer in Scars, written with searing honesty by Greg Abbott. John Leaf is lovely as her husband, a man who is awkward but so dearly loves his wife. The love energy between these two is palpable.

Emily Arachtingi has written the monologue, Waiting, which plumbs the anguish of a wife whose husband is on yet another tour of Afghanistan. Kari Elizabeth Kjeldseth portrays her anxiety and reveals the unfair way in which military families have shouldered the burden of the Bush/Cheney wars which Obama has continued and which Romney wants to expand still.

Janet Bristow has written an aggressively unsentimental view of older married heteros titled Ebbing. Christine Sweet and Bill Studer charm and repel as they reveal how incompatibility becomes a way of life. And when I say repel, I mean that as a strength in their acting and in the writing. Bristow has given us a refreshingly corrective antidote to the sweet old couple stereotype that got so much traction with plays and films like On Golden Pond.

In I Would Never Live in a Social Democracy, The Lines Are Way Too Long by Valerie Borey, actress Peyton McCandless rivets as a young woman who thinks out the pros and cons of heterosexual marriage and seems to ultimately conclude that it’s not such a good deal for the woman.

Indeed, Borey captures this showcase’s permeating theme that marriage may not be what it’s cracked up to be. At least in the way our society and culture have implemented it. A concept that some glbt people complain has not been allowed to be part of the current marriage equality debate. In a final ensemble piece, A Small Play About Marriage by Jen Scott, we see various couples gay and straight, discussing just that. It makes for an honest and illuminating theatrical experience that has something for everyone.