It may just be the most expensive city in the world, especially for travelers from the United States and Canada, but there’s no denying that London makes for an enchanting and exciting big-city getaway. Interestingly, the London neighborhood that most interests GLBT visitors, Soho, lacks any museums or formal attractions. But this colorful, slightly risque district abounds with festive gay bars, hip restaurants, offbeat shops, and arguably the best people-watching in Great Britain. Here’s a look at where to eat, play, and stay in London’s definitive Gay Village. 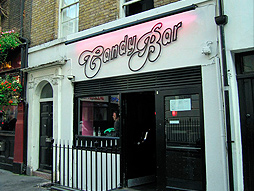 This neighborhood bounded by Oxford Street, Charing Cross Road, Shaftsbury Avenue, and Regent Street was laid out in the late 17th century and initially attracted mostly working-class immigrants. As adjacent areas became more desirable, Soho steadily declined in respectability, to the point that by the middle of the 19th century, the warren of crowded lanes had become overrun with brothels and music halls. This legacy would eventually secure Soho’s place as the heart of London’s West End theater scene—it remains a popular neighborhood for catching a musical. The London Theatre Guide’s website (www.londontheatre.co.uk) is an excellent resource for finding out what’s playing where and for booking tickets.

Soho’s louche Victorian reputation carried well into the 20th century, when its gritty vibe began to attract a fair share of bohemian sorts and intellectuals. In the 1950s, it became the heart of the city’s jazz scene. Leading rock and punk musicians performed in clubs and recorded in studios in Soho during subsequent decades. The neighborhood’s freewheeling, countercultural attitude made it a naturally appealing hub for London’s emerging gay community, and by the 1980s, Soho had begun to glow pink, especially along Old Compton Street, which remains the most queer-visible thoroughfare in the city.

In more recent years, Soho has continued developing an even stronger gay presence. On certain blocks, this 1-square-mile neighborhood can still feel a bit seedy, and on weekend nights, you can barely move among the throngs of tourists, locals, and suburbanites who crowd the narrow streets. But Soho is otherwise quite safe, and it’s become increasingly trendy among foodies, artsy types, media moguls, fashionistas, and other West Enders.

Despite Soho’s lack of attractions, it’s adjacent to several neighborhoods with cultural cachet. To the west and southwest are ritzy Mayfair and St. James Park; just south is the city’s vibrant Chinatown. And the literary Covent Garden, Strand, and Bloomsbury neighborhoods lie to the east. Soho has one of the most appealing small parks in the city, Soho Square, which is a must-see on warm days. It’s surrounded by fashionable houses and offices, and when the sun is out, you’ll see scads of “family” out lying or sitting cross-legged on the grass—it’s a lovely place to picnic, cruise, and enjoy a little break from central London’s sometimes intense crowds.

Dining is one of the Soho’s leading draws. For light snacking, just stroll along Old Compton Street, and you’ll discover a slew of gay-popular places serving espressos, sandwiches, and international fast-food. Among cafes, the Soho branch of the popular London franchise Patisserie Valerie is a good bet, with its addictive almond-frangipane tarts and fruit scones with butter. For a more substantial meal, Balans is a classic choice for dinner—it’s in the very center of Soho’s gay bar action, and the staff and crowd are good-hearted, lively, and chatty. The kitchen turns out commendable international fare at reasonable prices—try the Thai crab cakes with a honey-miso dipping sauce, or tapenade-crusted cod with crushed new potatoes and tomato-and-red-onion salad.

An icon among London’s gay cafes, First Out opened in 1986 and has enjoyed a phenomenal lesbian and gay following ever since. It’s a great little community hub serving creative veggie cuisine (falafel, curries, pastas) and fair-trade organic coffee. A cheery little bar in the basement is popular with after-work types for wines by the glass, imported beers, and designer cocktails. Although mixed male/female most of the time, First Out draws a mostly lesbian crowd on Friday nights.

Along Frith Street, which is rife with excellent eateries, drop by stylish Barrafina for such authentic Spanish tapas as octopus grilled with capers, and chorizo sausage with potatoes and watercress. Boheme Kitchen earns high marks for its stellar contemporary European fare and rustic decor (exposed brick walls, wood-plank floors)—it’s a favorite for weekend brunch (try the scrambled eggs with smoked salmon). Tasty, affordable ethnic fare is easy to come by in Soho—consider Imli for superb and creative Indian fare, including cumin-mint tilapia with a pine-nut coriander sauce; and Bar Shu for tantalizingly good Szechwan cuisine amid artful surroundings.

Much of the city’s hard-core gay-clubbing action has moved to the scruffy but much-hyped South London neighborhood of Vauxhall (a.k.a. “Voho”), where countless discos lie side-by-side beneath an expanse of railway arches near Waterloo Station. Still, good old Soho claims a couple of world-famous queer clubs and legions of smaller, convivial gay pubs.

Heaven, one of Europe’s definitive gay discos, is a wild show that keeps busy until 5 in the morning. Ku Bar is fun and stylish, catering to a stand-and-model under-30s set, while G-A-Y Bar is Soho’s premier see-and-be-seen hangout—lesbians tend toward the intimate basement lounge, while the other three floors draw a mix of women and men. It can get a bit touristy here, but that also means it’s an easy place to meet folks visiting London from all over the world. At G-A-Y Bar, you can learn the latest about upcoming G-A-Y Club parties—these wildly popular events take place several days a week (usually Monday, Thursday, Friday, and Saturday) at the London Astoria nightclub on Charing Cross Road.
Candy Bar is Soho’s most inspired lesbian hangout, offering up a good mix of music, drinks, and entertainment, including strippers. On Wardour Street, stop by the Duke of Wellington pub to check out the multi-generational, mixed-gender bunch of revelers. Edge is a distinctively decorated (note the huge fish tank as well as a baby grand piano) four-story club overlooking Soho Square and drawing a fairly professional bunch of women and men. If it’s cabaret you’re into, check out 79 Charing Cross Road, which presents popular piano entertainment nightly and also has a popular open-mic night on Sundays.

Bears and dressed-down types, mostly ages 35 and older, pack into Comptons of Soho—head for the cozy upstairs lounge if you’re looking for a quiet spot to chat with a new friend, or join the masses outside on the sidewalk, smoking up a storm (London bars are smoke-free inside). Across the street from Comptons, the Admiral Duncan has been a fixture in Soho for years, and it remains a friendly, attitude-free place to mix with locals of all ages.

Other Soho gay bars of note include Barcode, with its busy downstairs dance floor, a cruisy male crowd, and comedy shows on Tuesday nights; and Village Soho, a hip and energetic spot known for its buff go-go boys. Rupert Street is an unpretentious and friendly gay pub serving drinks and reasonably good pub food, from burgers to traditional sticky toffee pudding. It’s a bit airier and less stuffy than some of its neighbors, and it draws a convivial all-ages bunch.

The neighborhood may have lost its reputation for hardcore adult entertainment, but Soho still has a number of boutiques selling gay fashion and underwear, adult movies and mags, and various Pride novelties and gifts—definitely check out Boy on Old Compton Street and Prowler on Brewer Street for the best selection of these items.

Soho doesn’t have much in the way of accommodations, but you will find one gay-popular gem, Hazlitt’s, set along trendy Frith Street. The smartly decorated, mid-priced boutique hotel occupies three adjoining Georgian houses. Guest rooms are decorated with gilt-frame paintings, four-poster beds, and unfussy but elegant antiques, along with such modern touches as flat-screen TVs and free Wi-Fi. The hotel is named for early 19th-century essayist (and confidant of the gay poet Byron) William Hazlitt, who lived and died in one of the terraced homes that make up the hotel.

Another fine option is the Soho Hotel, a sophisticated 91-room property just off Dean Street that occupies a soaring loft-style brick building. Rooms have high ceilings and huge windows, and some have terraces overlooking the neighborhood. The hotel’s swish Refuel Bar & Restaurant serves very good mod-British fare, such as roast monkfish with olive-tomato salsa, and a salad of shaved fennel, feta, bacon, and chives.

For sheer luxury and supremely personal service, it’s hard to beat the Radisson Edwardian Mayfair, a sleekly restored 1927 grande dame that’s a favorite of celebrities and discerning travelers in the know. The swank suites with ornate design themes are a big draw, but even the standard rooms here are spacious and sumptuously furnished—the hotel is in ritzy Mayfair, an easy walk to Soho nightlife. If the nonstop revelry and merriment of Soho proves a bit exhausting to you, this discreet property on a quiet lane near leafy Green Park may just be the perfect place to rest your head each evening.