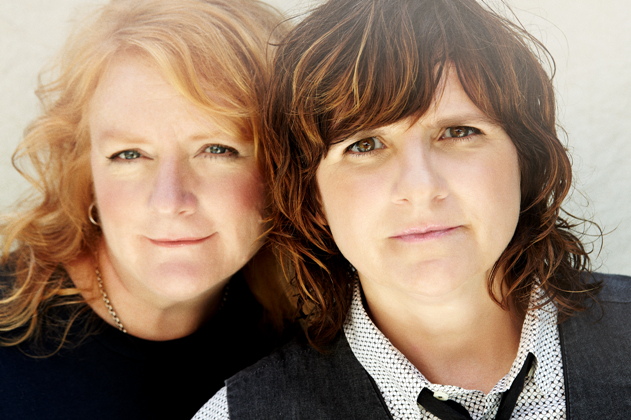 Just in time to finish off the summer, the Indigo Girls will be playing an all-ages show at South Central Minnesota Pride in Mankato on Friday, September 7th at 7:00pm. We caught up with Emily Saliers, who describes what it’s like to be part of the most loved folk duos of all time, discusses her life outside the Indigo Girls, and offers advice to the GLBT community. To purchase tickets, visit http://www.scmnpride.org/.

Kathleen Watson: When did you know you wanted to be a musician?

Emily Saliers: I think ever since I could remember being alive. My dad was a pianist and an organist, my mom played piano, my grandfather was a professional musician, and all my sisters sang. Music just permeated our lives. I got a guitar when I was nine, and I started writing songs then. I already had visions of doing that for the rest of my life.

KW: How would you describe your first songs? What would you write about?

ES: Really bad. But I wrote a song with my sisters when I was nine, and it was about pollution, so I guess we were sprouting activists even then. 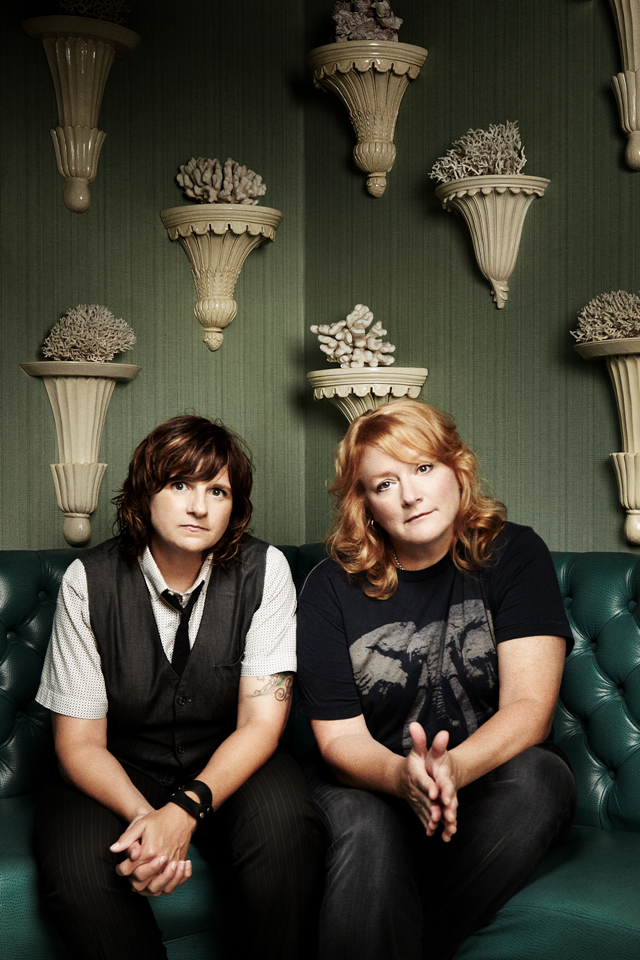 KW: How would you describe your musical partnership with Amy?

ES: Yin and Yang. It’s a beautiful thing. We have very different personalities, different ways of expressing ourselves, different ways of performing, different energies. I think that it’s those differences, sometimes those starkly different, that make the whole thing work. It really is a yin yang situation. Ever since we got together in high school as friends and started playing music…She had the lower voice, and I had the higher voice. I played sort of “picky” guitar lines, and she was a rock and roll strummer. She was more drawn to alternative music, and I was more drawn to Joni Mitchell. All those things, those differences from the very beginning, have worked to our advantage and kept it interesting for us and I think for our fans as well.

KW: Did you ever have a moment where you thought, “We’re just too different. I don’t think we can do this?”

ES: No, I never did. For me, it’s like I get to live this whole other musical life. I get to rock out through Amy’s songs. It’s not as natural (though I would like it to be more so) for me to write a rock song as it is for Amy. So when I sing her songs, I get to live that musical life. It’s just a bonus for me. It’s awesome.

KW: Speaking of different personalities, in our past interview with Amy, she said that you two struggled with the decision to come out until you suddenly opened up in a press conference around 1991 with some college press. Do you remember that? What do you think encouraged you to open up?

ES: It’s so funny because Amy has this memory that’s like…(What’s that animal, the elephant or something, that remembers everything? I don’t know.) Her memory is incredible. I don’t actually remember the event, but I remember the fear surrounding the time coming up to that point. My fear was that there would be a stigma, we would be marginalized, and of course all that was true. But it just became obviously more important—we had such a large support from the lesbian community and the gay community before we were signed, when we were a bar band—it became much more important to become part of the movement, the evolution of civil rights of queer people. So once I stepped out of my fear, it was actually not a problem at all. Amy never had any issues with it, and I just had to work through some fears, and then it was just like “Oh, ok, here we go,” and it wasn’t even a big deal. There was no looking back. But I don’t really remember that press event.

KW: Amy said you just opened up, and she was so surprised and thought, “Where is this coming from?”

ES: Now that you’re mentioning it, the vague memory is coming clearer. It’s just one of those things. Who knows how the transformations happen? But when they do, it’s kind of like “the truth will set you free.” There was no fear after that.

KW: Do you have any advice for GLBT people that are struggling to come out?

ES: First, I respect the struggle. I’m not a person who thinks about outing people. I do believe that if you can find ways to help your courage, it helps everybody for people to come out. I was fortunate to have a family that didn’t disown me, and I went to a progressive church…I would say to seek out as much support as you can. Now with the internet, there’s lots of support. Things have gotten better. It is better for everyone when people come out, but I totally respect the struggle. It was easier for me than it was for a lot of people.

KW: Do you remember what your first Pride was like?

ES: I do remember attending my first Pride! It was in Atlanta; Pride was marching down the street, and this was way, way, WAY before I came out. I remember I felt this mix of “Is anyone going to see me here and think anything?” (I had no vocabulary for what I was feeling inside.) The other part was this pride that there is a place for somebody like me, and this is a celebration, and it was very stirring and encouraging to have people who were all out loud about it. I was quite young, and I remember it was as clear as day…I was about 17 or 18. 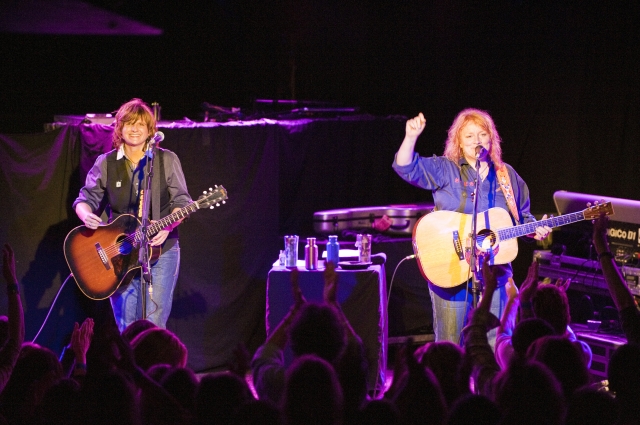 KW: What do you do when you’re not with the Indigo Girls?

ES: I’m a co-owner of a restaurant in Atlanta called Watershed. I’m a big foodie. Then I like to write music for film. I just recently wrote music for a short film by a friend of mine in LA. It’s called Past Due, and it got accepted into a bunch of indie festivals which is great. I’d like to continue to that. And I also enjoy co-writing. I’ve done some co-writing with some folks from Nashville.

KW: You and your father, Don Saliers, wrote a book—A Song to Sing, A Life to Live: Reflections on Music as Spiritual Practice. Can you tell me a bit more about it?

ES: We wrote the book a few years ago now, and we still get invited to do programs where he sort of becomes an “Indigo Boy” and plays or sings Amy’s part, and I sing some of the church music he’s written. It’s sort of an exploration of music and spirituality, music and social change. We go into academic settings, community settings, churches, or places of worship, and we do these programs and talk about that.

KW: When you and your father talk about music, spirituality, and social change, what are some of the issues you focus on?

ES: We talk about how music can galvanize a social movement, like in the Civil Rights Movement with “We Shall Overcome,” or there are songs that we bring to the audiences about the Apartheid Movement in South Africa, songs of Eastern Europe during the repressive era of the 20th Century…We talk about how music bolsters people’s spirits and helps them carry on in difficult times.

In addition to that, [we talk about] things like funerals, weddings, baptisms…sacred ceremonies, and how specific music is chosen to reflect a life or a death or a season of hope. That’s the same for any kind of music…it bolsters your spirits. Music has helped me in my personal life in that way.

KW: What can we expect from your Mankato Pride show?

ES: We’re going to be playing with a band called the Shadowboxers.  [Find them at www.theshadowboxers.com.] We love them. They’re going to be our back-up band. We’ll just be doing a bunch of songs from the discography. It’s a high-energy show with lots of fun. We love playing Prides; they’re our favorite shows. It’s just so joyful.

KW: How do you feel about coming back to Minnesota?

ES: We feel very close to Minnesota for different reasons. One is that our Executive Director of Honor the Earth, Winona LaDuke, lives at the White Earth Reservation in Minnesota. [For more information about Emily and Amy’s nonprofit, Honor the Earth, visit www.honorearth.org.] We have a very loyal following in the Minneapolis/Twin City area. But we also spend time on the reservation. Also, I lived near St. Cloud in Collegeville for a year when my dad was on Sabbatical. So our family has lots of ties to Minnesota. My parents are huge Garrison Keillor fans. Just really strong ties to the state in general, so we’re looking forward to coming back.