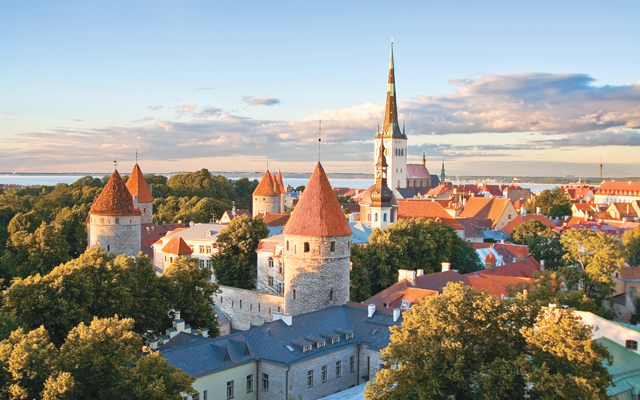 Enticing Estonia. Estonia shares a border with Russia, but not many happy sentiments, as Obama’s recent speech in Tallinn, its capitol, reinforced. Envied for its location on the Baltic Sea, Estonia has been overrun by Swedes, Danes, Germans, and Russians, including the Soviets who rescued the country from the Nazis only to outstay their visit until the famed Singing Revolution in 1991. Estonia is now a leading member of the EU, and attuned, instead, to its Nordic neighbors with a similar clean sense of design, love of nature, ebullient wit, and feisty spirit.

The airport, dressed in bright, spicy colors, is only three miles from the Old City, still bound by medieval walls spliced by guard towers (one is named Fat Margaret). Within lies a UNESCO-protected storybook setting of cobblestone streets hugging Gothic manor houses, centuries-old churches whose spires still pierce the sky, and Town Square, the hub of the city for 800 years. Here a historic pharmacy still stands where it once dispensed roasted bees, fish eyes, and cats’ blood as remedies, but those neighboring medieval mansions now house classy crafts boutiques and cafés with umbrella-topped tables. “It’s a Medieval Disneyland,” laughs our guide, Uve, pointing out the eleventh-century Great Guild Hall and its neighbor, the Church of the Holy Spirit—oldest in town—where I later return for a free organ concert .

But this is not a cloying throwback to Ye Good Old Days: Tallinn buzzes with energy and creative juices that vault it ahead of its neighbors—the inventors of Skype (as they’re eager to remind us), with free Wi-Fi everywhere; designers of duds and home gear ready for their close-ups in glossy magazines; creators of forward art and music and cuisine and whatever else you care to name. 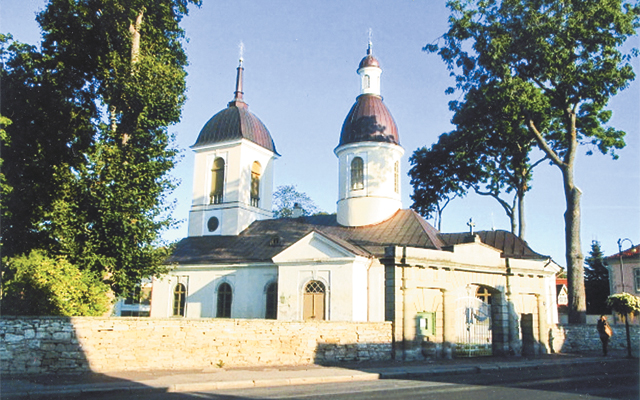 Indeed, the most popular attraction is the newly-launched Seaplane Harbor, housed in the 1916 hangars built by Russian Tsar Nicholas to defend St. Petersburg. Hands-on, interactive displays explore what’s underwater, from the earliest shipwreck ever found to a World War II submarine (climb right in) and torpedo simulator (ready, aim…), then segues to vessels atop the water, from a primitive dugout to a motorboat from the ’30s, a seaplane, and defense cannon.

For a panorama of the Old Town, visitors can claim a bird’s eye view via a brand-new, tethered helium balloon. Those spires you spot belong to St. Alexander Nevsky, the bulb-domed Russian Orthodox Cathedral, while the spare white steeple is St. Olaf’s, which, in the fourteenth century, was the tallest building in the world. Medieval St. Nicholas now serves as a museum for medieval art, including the admonitory “Dance of Death.” The town’s history museum celebrates Estonia’s spirit of survival, as ten foreign powers take turns occupying the country over the last 800 years—most recently the Soviets, who conducted mass deportations to Siberia via cattle cars, as the somber Museum of Occupation (Nazi, too) testifies.

During the Cold War, the Viru Hotel served as headquarters for the feared KGB. A visit to the 23rd-floor inner sanctum displays ashtrays bugged with microphones, the hotline phone direct to Moscow. Earlier Russians, then Soviets, used the bastion tunnels surrounding the Old Town as a prison, then bomb shelter. Today, we follow a guide underground to spy where punks hid out from their oppressors and, post-freedom, the homeless in their squats. 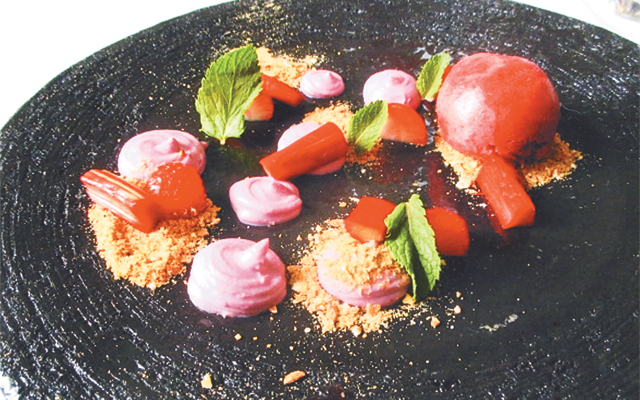 Back in the daylight of Catherine’s Passage, we troll through working artisans’ shops for designer garb in leather, wool and linen; I overload my suitcase with treasures from the design collective Eesti Esindus. Tallinn’s sense of style extends to its kitchens. Hotel breakfasts could double as Sunday brunch, while restaurants like Noa (as in Noah’s Ark) celebrate seafood aside the sea, with pure and simple fare such as salted whitefish with cucumbers and dill sauce or pike-perch with new potatoes.

Nejkid, rates in the Top 50 of Estonia’s restaurants, sports cosmopolitan renditions of ultra-local products, as in smoked duck with rhubarb; lamb with red cabbage-cherry sauce and a pea-mint salad; and moose steak with blueberries. Leib stays close to home with an Estonian beef filet aside local carrots and chanterelles; quail with zucchini-green bean salad; and crème brûlée with black bread. Kaks Kokka  (“two cooks”) treated us to smoked herring salad with salted cucumbers and homegrown tomatoes; a chilled pea-cucumber soup with crayfish tails; and dessert of strawberries, cherries, and mint ice cream.

Estonians are passionate about nature. Find it at its purest in Lahemaa National Park, an hour from Tallinn, where bog-walking is a year-round sport. Strap on plastic “snowshoes” to bounce your way across the spongy surface. Then reward yourself with lunch at seaside MerMer, served summertime in a converted barn and in winter, aside a cozy fire by two escapees from the city who grow and prepare feasts that segue from steaming homemade bread and cured salmon salad to chicken with potatoes and chanterelles. 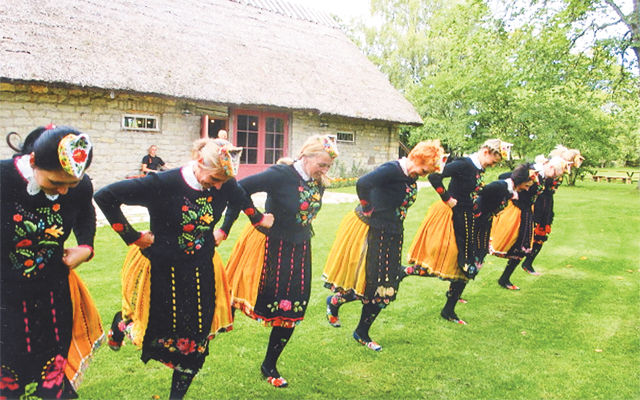 The way we Minnesotans love our lakes, Estonians adore the Baltic Sea—especially the skein of islands dropped like pancake batter not far from the coast. Hop a ferry to Muhu, two hours from the city, and Nautse Mihkli, the oldest farm on the island, whose thatched cottage urban émigrés Ingrem and Kaler Randjoe restored to offer cooking classes and meals straight from the woods and water, like our feast of pike quenelles, redbuck tenderloin, and beet ice cream with blueberry panna cotta. Guest cottages beckon. So does the sauna. Nearby, in another woodland cottage, Ea and Stephen Green not only make and sell enticingly-scented organic soaps, but also teach visitors the skill.

We circle back to Muhu for the grand finale—an overnight at Pädaste Manor, which host, Martin Breuer, painstakingly restored from centuries of crumbling for the express purpose of coddling his guests. Its restaurant, Alexander, has been voted “Best in Estonia” three years running for its focus on Nordic Islands fare like Baltic needlefish with seabuckthorn and local roe deer with beets and black currants. Says Martin, come here to chill out. “We have no waterfalls, no mountains, just the innocence of the islands where nature calls to you. Embrace it.”