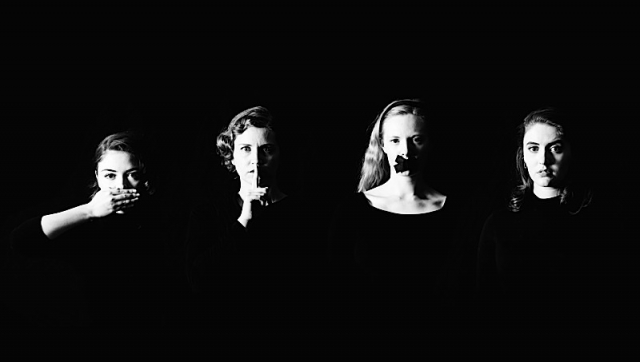 Those who think that the modern Sexual Revolution, pioneered by Magnus Hirschfeld and Alfred Kinsey, is totally unprecedented, should look to the past. In two riveting productions of 17th century works in alternating performances, Classical Actors Ensemble will dispel any illusions about that. The same troupe of actors performs both plays.

The time of Elizabeth I, and even more intensely, that of James I, reminds us that monarchical England was a hotbed of artistic investigation on the subject. So much so, that the theaters were eventually shut down.

The Sexual Revolution, whose heyday was the 1960s and ’70s, only to be brutally curbed by the AIDS pandemic in the ’80s, is undoubtedly significant. And its social and collective psychological consequences have barely begun to be discussed rationally. Nonetheless, the inquiry into issues of sex, violence and how the subconscious blindsides human relationships undulates throughout the history of western civilization.

Flashback to the 1600s before the Puritans rose to power and the Jacobean theater was triggering reactionary fear and anger. William Shakespeare’s Measure for Measure and Thomas Middleton’s Women Beware Women dive deeply into the dark recesses, or what then would have been called the “sinful” or “fallen” undertows of human nature. Subsequently, both works unflinchingly expose the corruptibility of inevitable socio-economic hierarchies that reflect human nature. On the Gremlin Theatre stage, this dark side electrifies.

Published in 1657, three decades after Middleton’s death, Women Beware Women could be described as a thriller that unfolds to reveal the ruthless machinations of a power elite that procures women for powerful men. Ironically, a chief orchestrator is a widowed woman of means named Livia, searingly understated in a stunning performance by Samantha Papke. One can’t help but make the comparison between Middleton’s Livia of the Renaissance era and the historical Livia, insidious wife of and key adviser to Roman Emperor Augustus. (In modern times, Jiang Qing, better known as Madame Mao, also comes to mind.)

This play is utterly littered with victims along a path that culminates in a harrowing conclusion. Eva Gemlo is a young actress known for solid performances on local stages, but in the major role of the victimized Bianca, she amazes in a portrayal that journeys from unawareness to terrible awareness. The character’s dangerously naive, not to mention, obsessive husband (Vincent Hannam in a fittingly man-child portrayal) is oblivious to how the insatiable Duke of Florence (an ominously dashing Tyler Stamm) is a cunning predator of attractive women. Moreover, he is the proverbial aristocrat who sees cuckolding less powerful men as his right and privilege.

Joe Wiener as Hippolito, one of Livia’s brothers, evokes an unconscious quality of sexual desire toward his own innocent niece, Isabella, played with genuine sweetness by Samantha Fairchild. Hippolito, as played by Wiener, really thinks he’s Mr. Nice Guy. It’s a seductively effective performance that reminds one that a gently amiable appearance can mask a luridness beneath it. The subconscious hauntingly rears up from beneath the surface to snare us. One of the play’s great lines: “Restraint breeds wandering thoughts.” Middleton prefigures Freud.

A dynamic H. William Kirsch is intimidatingly brusque as Isabella’s controlling father and brother of Hippolito and Livia, giving the role a shrewdly gangster-like edge. The terrific Lolly Foy is an intriguingly smothering counterpoint as Bianca’s matronly mother-in-law for whom Middleton clearly cuts no slack. In Middleton’s fallen Machiavellian world, both genders are dreadfully flawed and are responsible for their actions even in the face of gripping societal pressures. Middleton seems to prophesy our contemporary notion that whatever befalls us, we are still responsible for our own reactions to and what we do with our circumstances. That said, he renders a society so systemically corrupt, that any effort toward free will is cut down automatically and savagely. Nonetheless, the choices of the characters disgust. That’s the point.

Director Joseph Papke’s remarkable track record continues. Once again, he exemplifies a grasp of classical texts beyond most other directors; not just the most fabled works of Shakespeare and Marlowe. Once again, he takes a lesser produced and infrequently studied English Renaissance play and mines it expertly to profound resonance.  His entire well-spoken cast matches passion with scathing intelligence to breathe urgent life into a supremely bitter and a supremely moral work. One senses the seething rage over chronically mean-spirited human interactions that Middleton had to have been incubating in order to write it. Papke’s actors make us feel that!

Almost four centuries after his death, Women Beware Women looms as a cautionary tale that commands attention. How frustrating that so little is known about the history of this play during Middleton’s actual lifetime. This truth-telling dramatist viscerally understood that evil can take root in any person, no matter what their gender is. And that hierarchies must be vigilantly be examined for potential corruption—a view also expressed in the complementing CAE production.

In Measure for Measure, written around the time of Elizabeth’s death in 1603, Shakespeare contributed what towers as a consummate statement on the tyrannical power of government to persecute citizens for illegal sexual behavior. An archaic law, never abolished, chases down commoner Claudio (a compelling Jacob Hooper) for non-marital consensual sex with his fiance and her subsequent pregnancy. Thrown into a death cell, he awaits getting his head chopped off. It should be noted that though this is a comedy, the beheading element ultimately is a gravely serious one for Shakespeare, despite nervous jokes made by some characters. State enemies and other criminals were regularly anchored on pikes for the general public to see and be cowered by. When American founders in the next century wrote and spoke against cruel and unusual punishment, it’s likely this was one of those practices that was seen in the spirit of the cruel and the unusual.

In Measure for Measure, when the audience laughs, it is nervous laughter. Ironic quips about execution are meant to convey uneasiness and embedded fear. The Bard’s grisly humor is not even remotely in the same vein as some of the more recent horrific beheading comic imagery in the name of free speech and “I was just joking” by some American comedians. He writes with dark humor in order to underscore and subversively criticize the cruel potential of draconian statutes.

One can’t help but think of the gradual repeal of sodomy laws that culminated in Lawrence v. Texas, 2003 in the United States and the Sexual Offences Act, 1967 in the UK. Though Shakespeare’s view in Measure for Measure is focused on judgments against heterosexual behavior, its erotophobic concerns parallel judgments against homosexuality, a practice which actually did result in the death penalty in Shakespeare’s England when exposed.

The basic problem: the state outlaws the sexual practices it deems as immoral, therefore, illegal. Free will and consensual agreement are not allowed to be factors. We can still apply this concern to our present day. Think of the slogan “Keep your laws off my body!” Consider that adult GLBT people, as well as adult heterosexuals, should share a mutual concern over unjust laws punishing certain sexual practices ranging from anal intercourse to any number of kinks, to non-marital sex and swinging in the age of Adult FriendFinder and Grindr, to sex work a.k.a. prostitution, etc. Shakespeare foresees for the need for the protection of socio-political advancements in the realm of gender and sexuality.

But sexual freedom is not the only big concern in Measure for Measure. In Shakespeare’s England the heads of the beheaded were placed on spikes for public display to serve as a fearful example. Late in the following century, the French Revolution’s Reign of Terror horrified with what was perceived as a penchant for beheading by guillotine. German Sophie Scholl was beheaded for treason by Adolf Hitler’s fiendish regime. In recent times, the Wall Street Journal’s Daniel Pearl was beheaded in Pakistan by terrorists in 2003, and in this decade, there was the beheading of Coptic Christians in Libya.

Measure for Measure clearly indicates the playwright’s strong feelings about the beheading tradition, especially when it serves as a bargaining chip for a man in power. When a temporary Viennese Lord named Angelo (Daniel Kristian Vopava) decides to arbitrarily enforce the law against commoner, Claudio, he righteously exploits his station in order to blackmail the doomed man’s desirable sister, Isabella (Madeline Wall), for his own sexual pleasure. Moreover, she is about to enter a nunnery, which makes her all the more alluring to him. This play reminds us that institutionalized rape has been a concern for centuries, which points to yet another core concern of the play: predatory misogyny.

There is something truly superb in Diane Mountford’s direction of a work which is traditionally described as one of Shakespeare’s “Problem Plays”, as well as one of his comedies. The beheading element understandably takes aback reasonable people unfamiliar with the play, but as the director shows us, that for all its sauciness, Measure for Measure is a powerfully moral work. Mountford has ingeniously blended the play’s continuously bleak content with glistening humor, never undercutting the gravity of its core themes. Most productions get lost in the gravity, leaving the audience scratching their heads about why it is classified as a comedy. CAE  shows us why as it plumbs the psychological depths of a perpetrator and social ramifications thereof, while observing the organically quirky reactions of those who inhabit the social order wherein the “problem(s)” occur.

Measure for Measure also has the “bed trick” germane to other Shakespeare comedies, as well as an ending with various marriages. That said, it leaves us with a poignant “loose end” of sorts, and more skepticism about the institution of marriage than earlier comedies, A Midsummer Night’s Dream and Much Ado About Nothing wherein love promises to conquer all. Mountford’s actors master these conceits splendidly.

The entire cast is wonderfuly brisk, yet always makes the text understood vocally without being rushed. The comedic element is led with crisp vibrancy by Hannam as the too-cocky-for-his own-good Lucio (James Cagney comes to mind) and Timothy Daly as Elbow, an eccentrically endearing constable. Tom Conry is splendidly deft as Duke Vincentio, the primary rightful Viennese leader who disguises himself as a friar in order to spy on how the city is run in his absence.