Imagine any of the finest, forward-­thinking restaurants in Stockholm picked up and plopped down in the heart of Linden Hills. Now, let loose a creative Minnesota genius with serious Scandinavian roots inside said restaurant. The result? Magic. Pure, unadulterated food fantasy. That just became a reality at Upton 43. 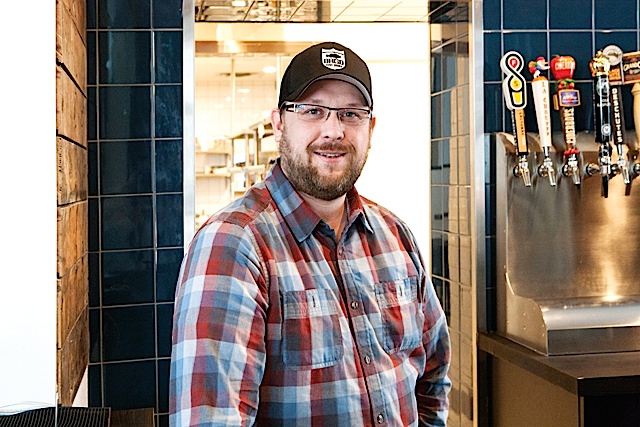 Aptly named for its location on the corner of, you guessed it, Upton and 43rd in Minneapolis, this upscale bookend to casual sibling Victory 44 is the latest love of aforementioned creative genius Chef Erick Harcey.

I say creative genius because Chef Harcey and his team took an old hardware store and turned it into a foodie’s playground filled with as much fun and whimsy as mind­blowing food. 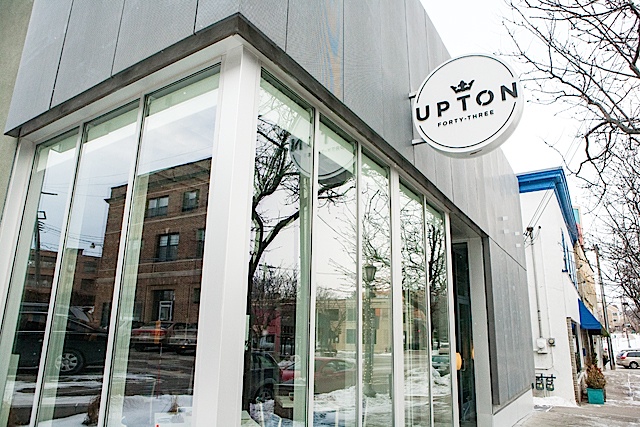 And that food finally made its way to my own mouth a few weeks back, along with a couple fortunate friends one chilly February afternoon.

You need walk no further than through its front door to realize Upton 43 is unique. And inviting. One immediately gets the sense good things will happen here. The decor is beautiful, clean, and stark, straight out of a Stieg Larsson novel. Yet, surprisingly, the space feels warm and full of life, thanks in part to an oak fire roaring in the kitchen. 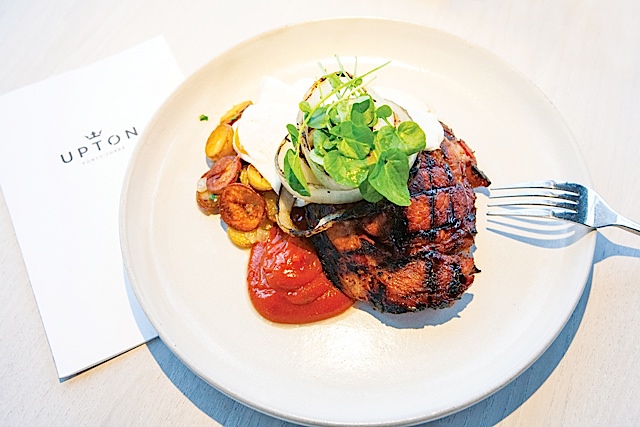 Whether dinner or brunch, the menu is packed with possibility. And adventure. Don’t let unfamiliar words like ärtsoppa and smørrebrød intimidate you. You’re in great hands. Indulge your curiosity.

From the first bites of fried goat’s milk gouda cheese nestled atop kale and lingonberries, it became apparent our meal was going to be anything but ordinary. The dish is basically fried cheese. That is, if fried cheese was an artist who studied in Paris and fell in love with a ballet dancer and then wrote a romantic nineteenth century novel about it. Seriously, this is some soul­-baring cheese. 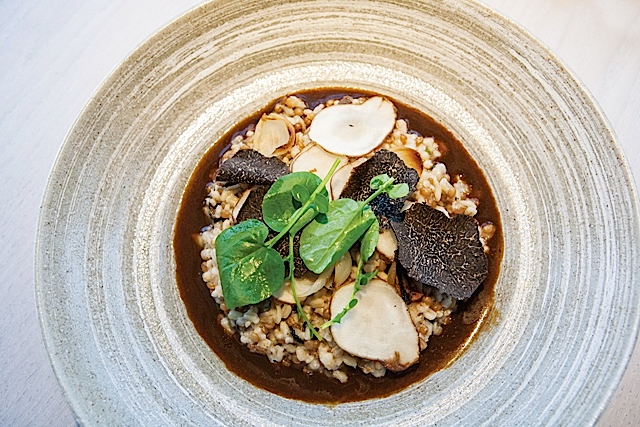 Chef Harcey can take the most mundane ingredient and elevate it to a level worthy of a gallery opening. Take, for example, lettuce. I can’t think of anything I’d rather order less on a menu than lettuce. A nosh or two into the fermented lettuce, however, and I was struck dumb. Not quite kimchi, not quite sauerkraut, this slightly sour greenery was dancing around my mouth as it had on the plate, mingling with its unctuous neighbors: egg yolk, walnut, and buttermilk.

And if the lingonberries hadn’t yet harkened Upton 43’s Nordic heritage enough, the Swedish meatballs ultimately did the trick. In spades. Simple and satisfying, these petite round melt-­in-­your-­mouth gems are set aside a potato puree you’ll want to spoon (as in, take a nap with). 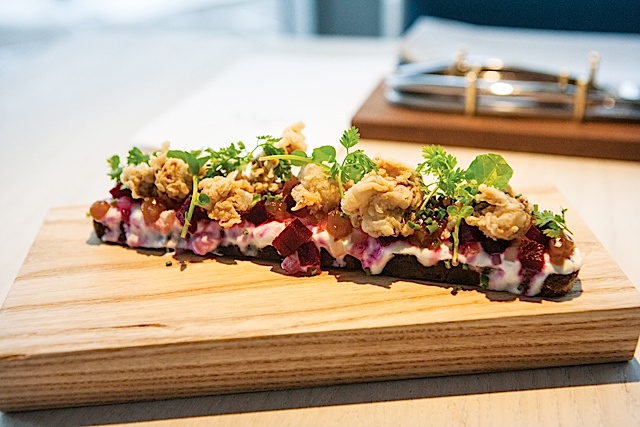 Perhaps the most belly­warming, satisfying dish we devoured was the bacon steak. Yes, bacon steak. Are there two better words in the English language? I think not. Combine them and, well, I can’t even. Lucky for you, Upton 43 can even. And did even. Fashioned out of a pork shoulder transformed, nay, baconized by the magic of Thor’s Hammer, this slice of porky goodness is served with perfectly tender eggs and crispy potatoes fried in duck fat. Oof.

Other table favorites included the crispy oysters (light and crunchy with apple, crème fraîche and a hint of anise), duck sausage (salty and rich, along with blood sausage bites, met with the subtlety and sweetness of figs and toasted buckwheat), as well as the warm grains (bedazzled with life­-sustaining slices of black truffle). 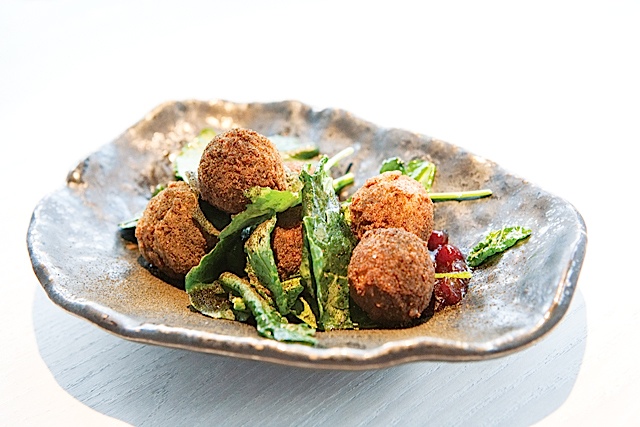 Hungry yet? That’s not even the half of it. Feel free to stop reading and make your reservation. I’ll wait…

While I’m waiting, I’ll dish a little on dessert. Lucky for sweet tooths like me, dessert at Upton 43 is not an afterthought. Don’t skip the warm and inviting rye pancake topped with a heavenly birch­-infused ice cream. Or my personal favorite, the juniper bavarois (Bavarian cream) with carrot granite (Carrots? Who knew!?).

It should come as no surprise, dear reader, that I haven’t stopped thinking about my meal since that last bite of bavarois. More importantly, I’ve been plotting my return. Even though we ate ourselves silly, there’s still lots more to explore at Upton 43. And I can’t wait to get my passport stamped again.

If you’re feeling particularly adventurous, make a reservation for the Chef’s Table. For a fixed ticket price, you and a bunch of other really lucky dinner guests sit around a big table sharing ample, amazing food (around ten courses) and an equally ample good time. 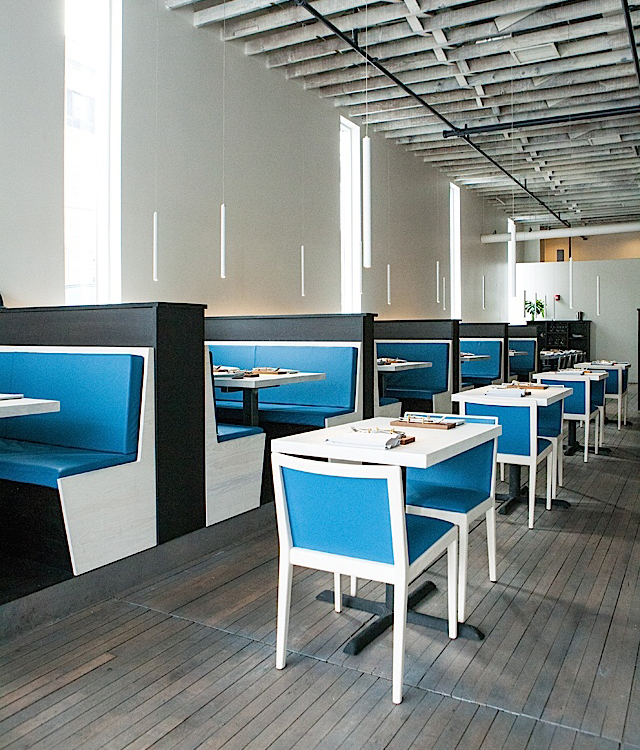 A space so clean and bright that goes from open to intimate as it turns from day to night.

One final note on tipping. Simply put, there is no tipping at Upton 43. Chef Harcey and his team made the decision to do away with the practice in favor of increasing pay and benefits for their staff. It’s just one more thoughtful experiment that separates Upton 43 from pretty much any dining experience you will have in the Twin Cities. And for that, I am (and hope you will be too) grateful.