Eat the Menu: Spoon and Stable 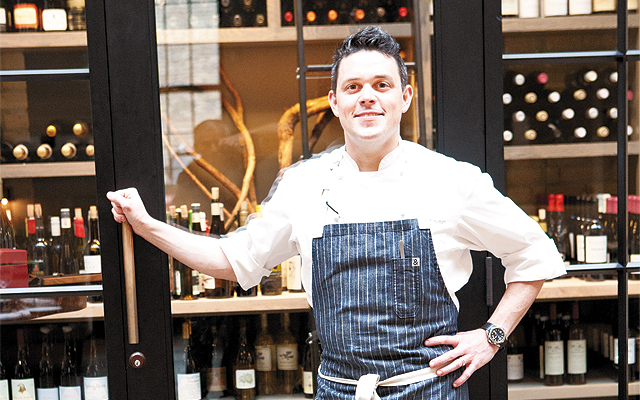 Everybody wants a reservation at Spoon and Stable. For good reason. It’s the hottest new restaurant to pop onto an already scorching-hot restaurant scene. From the moment lauded chef and native son Gavin Kaysen first announced he was leaving NYC and the helm of Café Boulud to open his very own restaurant in Minneapolis, countless foodies, critics, well-wishers and nosy neighbors have hoped to snag a table at this, the latest in a slew of much-anticipated restaurants. According to Kaysen, since they began taking reservations in November, the phone has not stopped ringing. Off the hook.

Wanting a reservation and getting a reservation, however, are not one and the same. In fact, as I learned firsthand, it helps to know people. It also helps to know people who know you have a reputation for eating food. Lots of it. Like entire menus of food. It’s a talent. Or a cry for help. I can’t begin to tell you how many times I’ve been told by well-meaning waitstaff I was ordering too much food, only to have them slap me on the back by the end of the meal, marveling at my power to pack it away.

Thankfully for me (and you, dear reader), it’s just that mildly inappropriate reputation among friends that won me, my partner, and a pair of good friends a golden ticket for a table at Spoon and Stable one very special wintry night in December. 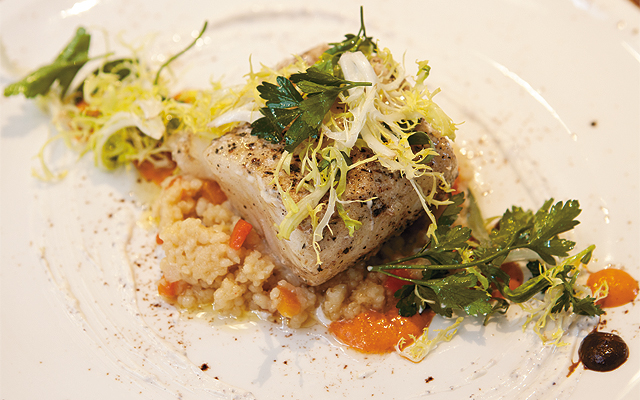 Back to that very special wintry night in December.

From the moment I walked through the doors, clichés-be-damned, I knew I was some place special. There is a palpable warmth to Spoon and Stable that’s alluring. And pregnant with paradox. The physical space is at once modern and old-fashioned. An open layout floods the room with light and sound, instantly sweeping you up in its embrace while the exposed brick walls and asymetrical contours of its former 1906 horse stable self-absorb the din of dining and cast comforting shadows throughout. You feel a part of something vibrant, moving, and alive without having to scream at your table mates to be heard.

Add to that an ebullient, well-appointed house staff, clearly still giddy over the opportunity to work for a chef like Kaysen, and you feel like you’ve gotten half a dozen hugs before even putting in your drink order.

By all means, don’t forget to put in your drink order. The depth and array of craft cocktails, both alcoholic and non-, from the skilled, artistic hands of Robb Jones were greatly appreciated. If you don’t see anything on the menu that suits your particular taste or personality that evening, don’t hesitate to ask for what you want. And forget not the wine. As if you could forget the wine at Spoon and Stable. The restaurant’s architectural centerpiece or “chandelier,” as Kaysen lovingly puts it, is a floor-to-ceiling, fully enclosed wine stable. Stable boy cum wine director Bill Summerville curates the noteworthy collection in addition to managing the place. 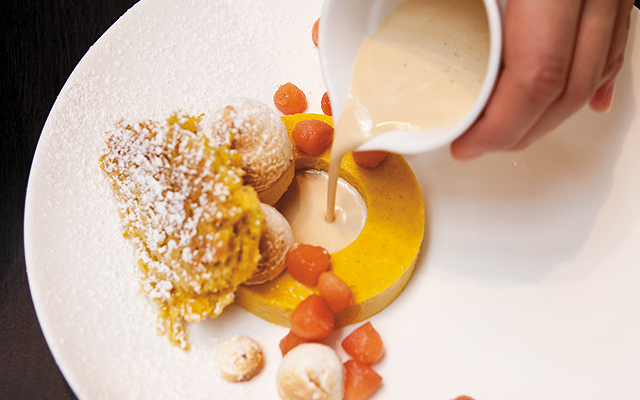 Drinks ordered, it’s time to talk food. This article is called “Eat the Menu,” after all.

And eat the (entire) menu we did, the four of us, save two items (not wanting to appear overzealous).

You certainly don’t need to order as ambitiously as we did to have a wonderful experience, but don’t be afraid to either.

The beauty of the Spoon and Stable menu lies in its versatility. You can adventure eat your way across it, sharing several dishes from each of six areas currently on the winter menu. Experiment. Be bold. Who knows when you’ll get another reservation. As always, Chef will happily course out any combination for you.

Conversely, you can selfishly indulge in a singular bowl of soup and an entree, leaving the table completely satisfied.

Our first foray onto the menu saw us on a stroll through the Garden. The Fire Roasted Carrots were a table favorite, tender and smoky with the delicate crunch of petite croutons and sunflower seeds. I had a torrid love affair with the aptly named Fairytale Pumpkin Soup. Upon wresting the bowl free from the table, I fantasized about jumping inside it, floating atop the coffee brioche raft all the while lapping up its golden sage-scented nectar.

The entire table was pleasantly surprised by the Belgian Endive Salad. In fact, we roundly underestimated this dish. The rich earthiness of the stilton set against the light and crisp endive with sweet bursts of fresh pear taught us a valuable lesson. Don’t underestimate endive. At least when in the care of Gavin Kaysen. 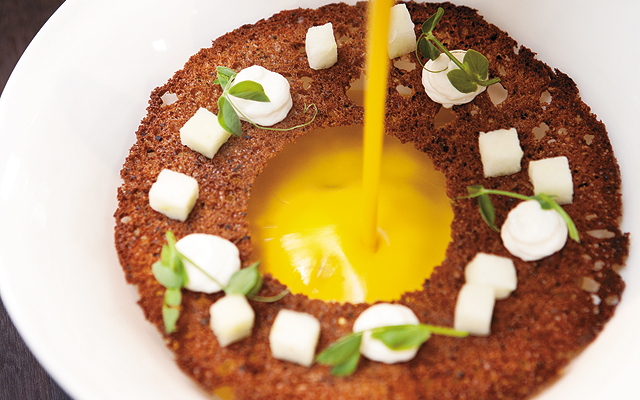 The Chilled section blew the table away with a Bison Tartare I hope will remain forever on the menu. Not to be outdone, the dill cured salmon was just as delightful as the story of its origin. Like several others, it pays homage to the culinary comforts of Chef Kaysen’s late grandmother, Dorothy.

And let us not pass over Pasta without mentioning the Risotto. Like the endive salad, I expected little of this dish. Until it was in my mouth. Its velvety smooth texture dotted with darts of parmesan wrapped around the tongue like a warm, salty blanket. I wanted to climb in the bowl and cuddle with this risotto. And then perhaps marry it.

From the Sea and Land sections of the menu, our table shared all but the Poached Sturgeon (sorry, dear sturgeon, it was nothing personal). The Cider Glazed Chicken and Dorothy’s Pot Roast took table top honors. For my part, I’d recommend the Pot Roast. And by recommend, I mean eat every night of the week, if afforded the chance. Fans of fins would do well to order the Slow Cooked Atlantic Cod.

Some sixteen dishes on and our epic gastronom-athon was nearing its end. As the parade of flavors still echoed on the tongue and grateful waistbands began to grow, the table pondered its journey. And marveled at the sheer embarassment of talent we’d just paid witness to.

And then came dessert! Suffice it to say, Executive Pastry Chef Diane Yang’s Haralson Apple Crisp will ruin you. As will her Buttercup Squash Custard. All for the better. Pair with a cup of coffee or an espresso and I defy you not to find words like “unreal,” “life-changing,” and “nap” at the tip of your thoroughly sated tongue. 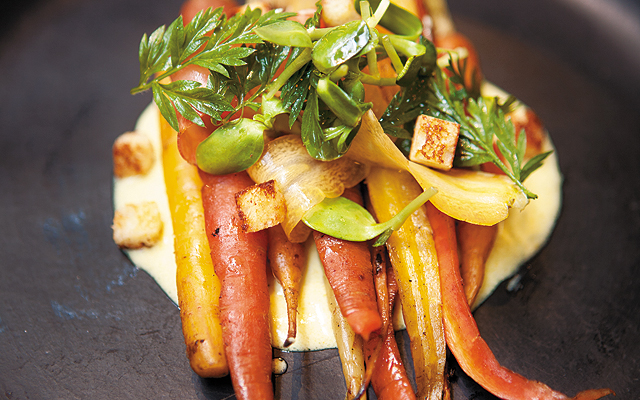 Spoon and Stable’s food, like its facade is full of paradoxes. Tasty, rewarding paradoxes Gavin Kaysen seems completely comfortable with. Simple dishes with complex flavors. Basic ingredients elevated with elaborate skill. Seriously delicious food that doesn’t take itself too seriously. Unlike many of his competitors, it’s not pretentious or precious. It’s honest. And earnest. Like all good Minnesotans. Which bodes well for Spoon and Stable. And our appetites.