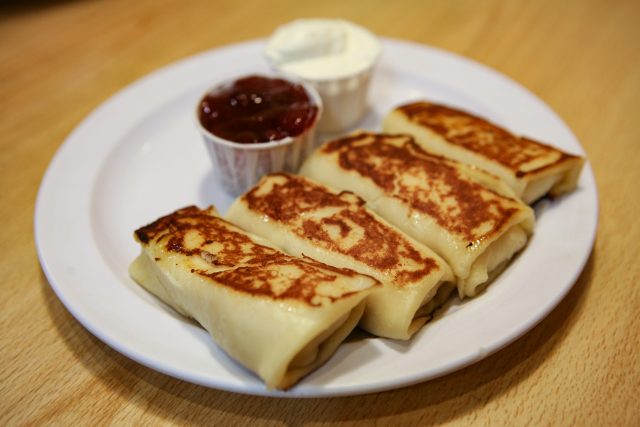 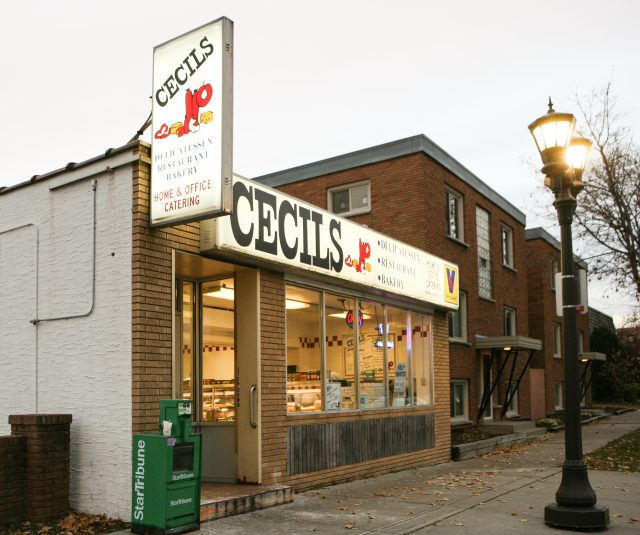 Cecil’s Deli has been a St. Paul mainstay for 70 years.

In a world that’s constantly changing and a restaurant scene that’s even more ephemeral, there’s a simple comfort in knowing, come what may, you can still grab a big, fat reuben with all the fixings just down the street. And that’s exactly what residents of St. Paul’s Highland Park neighborhood (and far beyond) have been saying about Cecil’s Deli for the last 70 years.

Yes, 70 years. Indeed, Harry S. Truman was president when Cecil and Faye Glickman opened their deli doors for the first time in July 1949. Today, daughter Sheila Levanthal and her husband David, along with three generations of their family, are carrying Cecil and Faye’s passion for food into the 21st century. Lucky for us.

A few weeks back, a couple friends and I were fortunate enough to take a walk down culinary memory lane and experience this family run institution firsthand. And, boy, did we learn a thing or two.

Let’s start with the menu. At Cecil’s, nobody’s going without options. There are over 150 items on offer at present. If you can’t find something to get excited about, you’re not trying. In fact, the hardest part is trying to narrow down the list of delicious options. 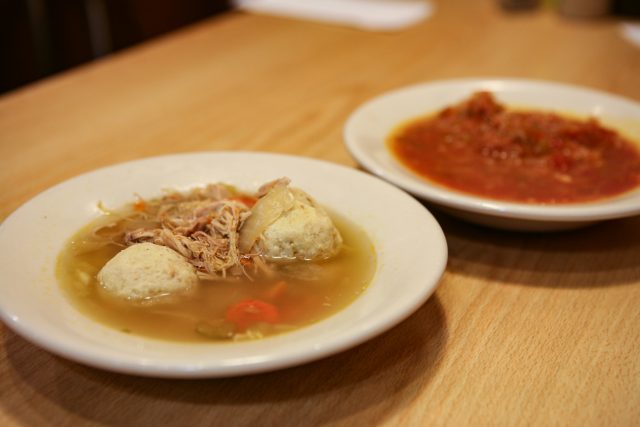 Cecil’s matzo ball soup and borscht are perfect starters for your dining experience.

On this particularly brisk autumn night, we started with a steaming bowl of chicken soup with matzo balls. All the soups are scratch-made at Cecil’s. And it shows. The chicken soup is comfort food at its best with satisfying, stick-to-your-ribs matzo balls. The borscht was another table favorite. This homemade sweet and sour cabbage soup with beef hit all the high notes: rich, tangy and substantial.

You could spend a lifetime working your way through the super long list of sandwiches at Cecil’s, but I’ll save you some time. Start with a reuben. After all, that’s what they’re known for. And what’s not to love? Corned beef, swiss cheese and sauerkraut stacked on thick, dark rye bread, topped with Cecil’s special sauce. If you only order one thing, make sure it’s a reuben. Save all the other sandwich delicacies for future trips (of which there will be many).

If you do venture beyond the staples, I can highly recommend the Sasha. This unique little number combines hot brisket pastrami, a fried egg, swiss cheese piled high on caraway rye bread. The special sauce on this sammy is “bird sauce,” a zesty Cecil’s creation that’s been on the menu for the last 50 years.

Sides are often looked upon as an afterthought, but I think they’re just as important as the main course. And nothing pairs better with a reuben than a fresh scoop of potato salad and coleslaw. The potato salad is legendary at Cecil’s and the coleslaw comes in two versions: creamy and sweet & sour. Both are divine, but I could’ve sidled up to a double helping of the creamy coleslaw and made it a meal all on its own. With a reuben for dessert, that is. 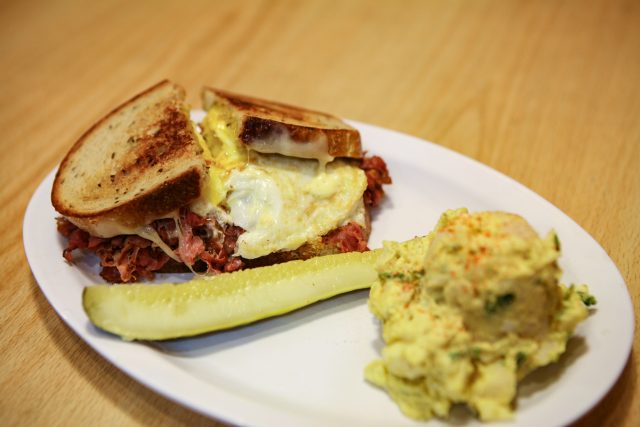 The signature Sasha is a hot brisket pastrami that’s to die for.

In addition to soups, sandwiches and sides, Cecil’s mammoth menu is replete with Jewish deli classics that deserve a place at your probably ever-dwindling table landscape. Our motto was, keep the food coming. And they did.

Of course, we ordered the knish. These handmade, potato-filled pockets are a perfect starter or side dish. Just make sure you order enough for everyone to have their own. We also made room (on the table and in our stomachs, though I’m not quite sure how) for an order of blintzes. These sweet, ricotta-filled crepe-like pillows of happiness melt in the mouth and brought more than one smile to our table. Especially, when topped with jam and sour cream.

After what seemed like all-the-bites, we somehow had room for dessert. At Cecil’s there are plenty of sweet treats, both on the menu and at the deli counter itself. If you’re not able to pack in another bite at the table, grab a few pastries to go. The hamantaschen are plentiful and packed with a variety of flavors. If you’ve never had one, think melt-in-your-mouth cookie stuffed with yummy fillings like cherry, almond and apricot.

We ended our journey across the menu with a heaping helping of warm cherry cobbler. Somewhat similar to strawberry shortcake, draped with cherries, ice cream and ample whipped cream, the three of us were unable to finish the entire bowl. A valiant effort, nonetheless.

A trip to Cecil’s is about great food, sure, but it’s also about paying tribute to tradition. And celebrating family. The way Sheila and Dave continue to celebrate Cecil and Faye’s lifelong passion for food with their family and all of us to this day. A fact that likely ensures Cecil’s presence on Cleveland Avenue for decades to come.