E.B. Boatner’s Sweeping Trans Play Trilogy Reveals How Our Time Shapes Who We Are 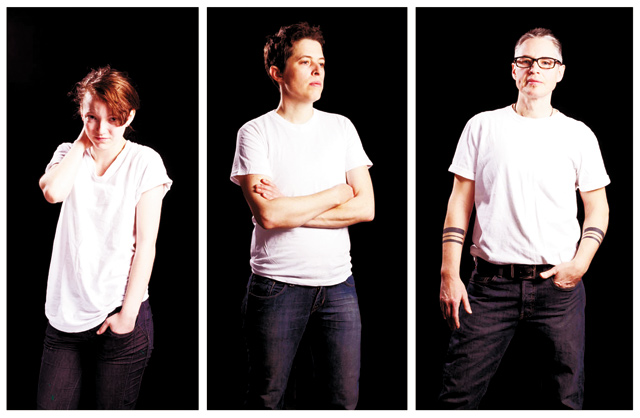 E.B. Boatner is the pen name for someone Lavender readers are long familiar with: Ethan Boatner, Editor Emeritus, whose A Word In Edgewise column still appears in every issue. However, in 2003, E.B.’s one act play, Wishes, was selected for Stages, the National Transgender Theater Festival and was staged in New York City later that year. After that he wrote two one acts that chronologically follow as part of his MSL (Masters of Liberal Studies) degree from the U of M. The trilogy is titled Changes in Time, now in its world premiere directed by Claire Avitabile for 20% Theatre Twin Cities at the Minneapolis Theatre Garage.

At 72, Boatner is someone who has lived a truly epic life. It took decades for the 1963 Harvard graduate to fully realize just what was going on within himself before he finally transitioned FTM. He was 11 when Christine Jorgensen’s 1952 MTF sex change astounded the world. Queerness of any kind -the words for which included transvestism, homosexuality, lesbianism, bisexuality- was either spoken about in whispers and/or pathologized. The term ‘hermaphrodite’ was used for what we now call ‘intersex’. In the mid-twentieth century and even into the 1990s, the term ‘queer’ itself was a prime insult and expletive.

Boatner’s parents were born less than a decade after the Oscar Wilde trials and were teenagers when women finally got the vote. They were born into a time when gender and sexual ‘otherness’ were codified as deviant. Such misfits, regardless of what sort of queer individual they were, were sometimes said to be The Third Sex. In some intellectual circles that term may or may not have been an insult. But beyond such circles it clearly was. Anything aside from the heterosexual norm was universally regarded as ‘unnatural’. The idea of sexual orientation as a viable identity was not yet formed. Therefore, the notion of transgender or transsexual as an option, much less an identity, was even further in the future.

I spoke with Boatner recently about how his trilogy reflects his own life, the eras he has lived through, and how we are each inevitably the products of our own time.

JT: You’ve been exploring ideas about how the time, culture, and vocabulary we are each born into forms our consciousness and seals us into ways of seeing and being. How does that figure into your own experience and Changes in Time?

EB: I believe that everyone is a product of his or her context, and can only act within those parameters. The time in which one lives, the perspective of the community in which one is raised, and the constraints of the prevailing knowledge -technological, sociological, psychological, scientific- determine much of your life. Penicillin, for example, was not availble during World War I, and begain to be used medically only a year after I was born (1941). In our society, homosexuality was deemed a mental illness in the DSM (Diagnostic and Statistical Manual of Mental Disorders) until 1973 when it was removed. Where one lands on the time and culture board is something of a crap shoot.

One of the main points of Changes in Time is that the characters have the knowledge and limitations of their time and can only speak in the grammar and syntax of the contemporary culture. This is as true of the protagonist born in 1941 as it is for the parents born in 1903.

The word ‘transgender’ was not available during the time frame of the first two plays, Wishes and Dresses (set in the 1950s-1970s). Rain (Briana Zora Libby) /Lorraine (Heather Spear) can only know something is wrong, not what. In Wishes, the character Court (Chava Curland) understands being a lesbian; not just because she is one, but that while lesbianism was not accepted, it was at least known to her and to contemporary society.

In Dresses, even in her 30s in the 1970s, Lorraine still only knows that she is not who she should be, not how to effect that change. She’s angry and can’t really articulate why. Her mother, like Court in the first play, can only think Lorraine must be a lesbian. Not until much later, in Changes, has the culture, technology, psychological and sociological understanding progressed to the degree that Laurence, née Lorraine, can comprehend ‘transgender’ and move forward to claim his self-hood. Yes, culture, like living creatures, changes and evolves: it’s happening today with the great sea changes in the growing acceptance of homosexuality as one of many wavelengths in the great spectrum of human sexuality.

JT: To what degree is Changes in Time autobiographical?

EB: The plays are autobiographical to the degree that any work of fiction is autobiographical. Whether a beginner, a Jane Austen, William Shakespeare, or Edward Albee, the writer sees life only through the lenses of personal understanding shaped by his or her culture.

Much in Changes in Time is true – conversations, physical details and so on- but none of the events ‘happened’. The confrontation in Wishes did not occur, although the camp did have candlelight wishing ceremony. My own parents died in 1983 and 1987. The word ‘transgender’ was never uttered in our home, since it was not yet in common parlance. They never met Ethan, so neither Dresses nor Changes could have transpired as they did in these dramatic, fictional renderings.

JT: I’m intrigued that you imagine how your parents might have reacted to your gender change.

EB: I planned each play to have two characters – primarily to be simpler to write and stage since they were my first plays. Wishes involves 14-year-old Rain with another teen and was designed to show how in a given time and culture, two close friends can believe they understand each other, yet be far wide of the mark.

Dresses and Changes have Lorraine and the Laurence (Chris Little) with the mother and father respectively. Obviously, then, the former addresses my thoughts on how a -and not necessarily my- mother (Muriel Bonertz) might react to her child’s revelations, while the latter suggests how a father (Dann Peterson) -not necessarily mine- would react to both gaining a son and mourning the loss of his daughter.

I’m not exactly hedging. I, in fact, have no idea how my parents would have reacted. They were so embroiled in their own affairs, they might simply have looked up briefly and said, “That’s nice, Dear.”

JT: Tell me how how the film Boys Don’t Cry (1999) became a kind of springboard for how you’ve come to see things.

EB: By the time I saw Boys Don’t Cry, I pretty much knew my own feelings. I had even gone out to dinner in a small, deep south town with a friend who was transitioning another way, me in a jacket and tie, he/she in a skirt and blouse. However, as I watched the film, I was wondering why the main character, Brandon Teena (Hilary Swank) was behaving -to my mind- so angrily and self-destructively. Then, in an epiphany, I realized that I had acted out in exactly the same way for years and and understood that like Teena’s, my own angry behavior stemmed from not being able to be myself, and not knowing who exactly that was.

Once I discovered that in this day and in this time I could be myself, I set about making it happen – in an amazingly short time attaining a state of what I called ‘gender euphoria’. As me, I’m quite content – even productive, having completed my MLS (Master of Liberal Studies) degree at the U of M last May, published my psychological thriller, M-O-T-H-E-R Spells Murder, last October, and now about to experience the first production of Changes in Time. The day after it closes I fly to Boston to see old friends at my Harvard 50th Reunion.

JT: You’ve said that being older may have actually kept you from being discriminated against.

EB: I meant that being older may have forestalled discrimination simply because no one is particularly cognizant of old fogeys: 72 is not the new anything. I can see that it would be very different for someone much younger in bar or dating scenes, or if an individual was of a markedly different body type than expected of their presenting gender – a very small, slender guy or a tall, husky gal, for example. The more notice is drawn, the greater the chance for discrimination. It’s real, it’s out there, it can be lethal. It needs to be addressed.