Düsseldorf: Queen of the Rhine 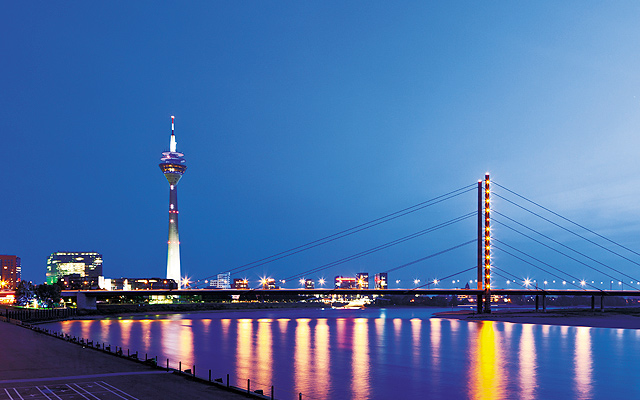 “Competition never sleeps!” invokes our guide as she marches us through Düsseldorf, the city that’s taken her motto to heart. Other German towns might be described as “quaint,” “old-world” or “romantic.” Not here.

Despite an Old Quarter crammed with antique facades, time-tested microbreweries and a vibrant open-air market tumbling over its cobblestones, the past makes way for tomorrow. The skyline sports the ultra-modern architecture of Frank Gehry and David Libeskind. Shoppers along the elite Konigsallee pop into Gucci, Chanel and Tiffany. They relax with a cocktail at the Breidenbacher Hof, a five-star hotel where I’m assigned a Personal Assistant to fan my every whim. (“Spargel”—the season’s first white asparagus—“with your eggs Benedict? Certainly. A ticket to the (sold-out) Deutsch Oper tonight? No problem. And may I bring you an espresso?”)

We tour the Tonhalle, where, within the repurposed planetarium’s dome, the symphony is playing. Then, a breeze through the forward art that’s the signature of this city. First stop, the NRW-Forum, celebrating Bryan Adams’ penetrating photo portraits of his buds—Ben Kingsley to Sting, Mick Jagger to QE2. And a nude Kate Moss.

The Gallery of the Art Academy showcases works by its own trend-blazing professors, while the Kunstpalast’s display manifests a cache that ricochets from Rubens to modernists Pollack and Hockney. Fast forward to the K20, where the table stakes include Picasso, Chagall, and Miro, then up the ante with American avants Warhol, Hockney and Lichtenstein. 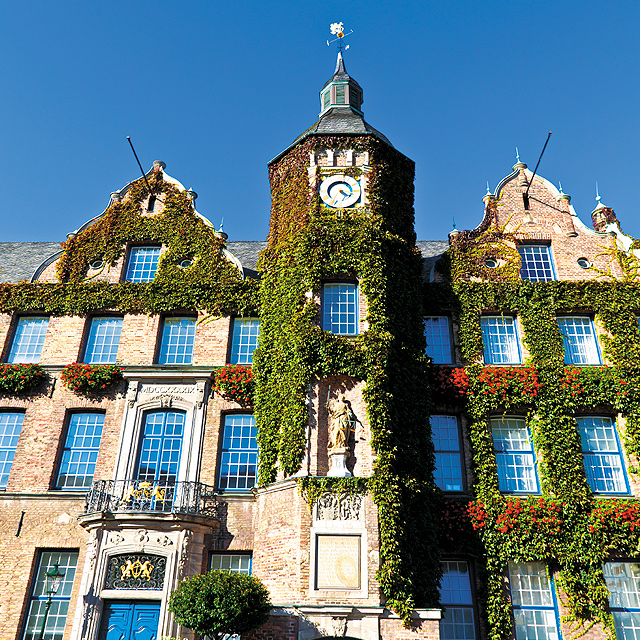 Think that’s wild? Then step over to K21, even more out-there, and the Tunnel Museum— housed, as promised, in a former car tunnel below the Rhine River’s promenade, where emerging artists have their say.

Past glories receive homage, too. Beyond the glorious green Hofgarten, where rabbits and swans monitored my morning jog, stretch the garden estate of Benrath Palace, a joyous Rococo wedding cake crafted to impress the proles by their ruler. Back in the Old Town for dinner, we bumped elbows, and steins of devilishly dark alt bier, with the burly soccer crowd, demolishing platters of mega-meatballs, uber-schnitzels, ginormous goulash and Rubensian rouladen (not counting potato dumplings big as cannonballs and fields of sweet-and-sour cabbage).

For a final dining fling, following an insider’s tip, we slipped into Shabby Chic, sporting chandeliers in its grunge-like setting hidden where even ardent locals might never stumble on it. My fillet of zanderfish came with a side of lasagna, while calves’ liver sported a truffle remoulade. Desserts were equally, divinely, erratic: caramel strudel lush with apples and oranges, and almond cake fueled with banana, chili and chocolate. I could get to like it here! Want to try it, too? Check out www.visitduesseldorf.de.  To make the going even easier, American Airlines has just introduced nonstop Chicago-Düsseldorf flights. 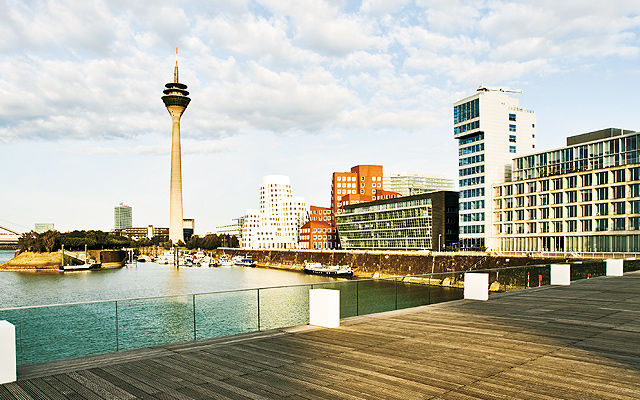 Cologne (Koln in German) lies 40 minutes by train from Dusseldorf. As if planned by the tourist bureau, its prime sites are clustered just across the plaza from the station. First off, that iconic, twin-spired cathedral—Germany’s most famous—a Gothic fantasy of lacy, sculpted stone and glimmering stained glass, whose construction begin in the 13th century to hold its most prized relic: the heads of the Three Magi, encased in a golden casket. 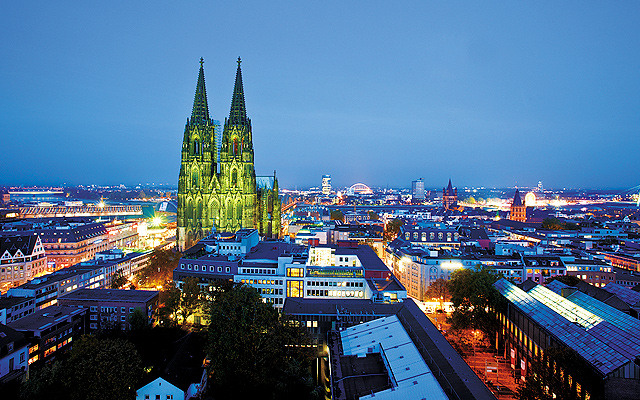 Next door, the ultra-modern Paulus Museum showcases contemporary art as well as a snazzy restaurant. Aside it, the Roman-Germanic Museum, through whose glass façade passersby can gawk at the grand mosaic floor, like a living-room carpet, of the Governor’s Palace of the Romans, who founded the city. This was Nero’s hometown, and a statue commemorates the famous fiddling emperor and his wife, Agrippina, who embraced poisoning as her particular art.

Twelve more Gothic spires pierce the skyline, visible on a relaxing boat tour along the Rhine. Behind the shoreline lies another archaeologist’s bonanza: the excavations of the medieval Jewish quarter, complete with jewelry. A museum is in the making here.

And that citrusy scent that embraces the city? It’s the colognes (get it?) developed by dueling perfumeries—4711 and Farina, since 1709 prized by everyone from Napoleon to Princess Di (oh, and Bill Clinton).

Linger for a bite of dinner before you hop the train. Fronting the street floor at Hof 18, outdoor tables are seized by the brewery’s rambunctious clientele. Upstairs, a more refined kitchen left me purring over a salad of goat cheese in apple-honey sauce, suckling pig in mustard, and a berry-crowned crème brulee. ColognePride and its Christopher Street Parade are July 5-7, the same days as its SummerJam music festival. For info, contact www.koelntourismus.de.

Aachen (Aix to the French ) is a 90-minute train ride west of Düsseldorf, and home to another emblematic cathedral. Settled by Romanized Celts in 1 A.D. and today livened by throngs of university students, its prime claim to fame is its most famous citizen, Charlemagne. He selected the site, 12 centuries ago, as his retirement palace and erected his sublimely beautiful private chapel within the cathedral—a petite octagon blooming with mosaics. A winding staircase leads to his throne, composed, they say, of the marble from Jesus’ tomb. 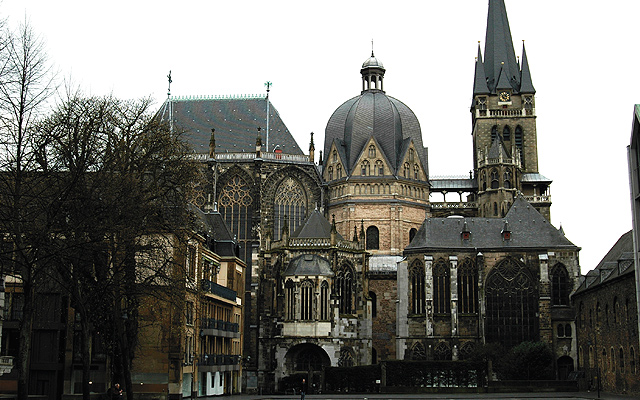 In that larger space below it, added onto by another bigwig, Barbarossa, stand two magnificent caskets of relics: the first, a golden cedar chest of sorts, storing the loincloth of Jesus and the Baby’s swaddling clothes; the second, the bones of Charlemagne himself—well, 94 of them, preserved when Barbarossa lobbied him for sainthood. Their carvings explain the politician’s motive: By sculpting Jesus leaning out of an upstairs window to crown Charlemagne, and kings of the time upstaging the usual images of the apostles, Barbarossa’s subjects got the message: Political rulers are more powerful than, ahem, the Pope.

Around the town, fountains gush at every crossroad, including aside the Town Hall of 1350 and the city’s oldest house, now the information center of the Route Charlemagne. Back in the day, gingerbread was given out to the town’s pilgrims; today, we snag our share at the many bakery shops scenting the city. Then it’s time for dinner deluxe inside that grand Town Hall—an amuse of crawfish- studded couscous, then cod in beurre blanc, pork with truffles and the season’s first spargel—that near-holy white asparagus—and crème brulee with pineapple ice cream. Visit www.aachen-tourist.de  to plan your adventure.