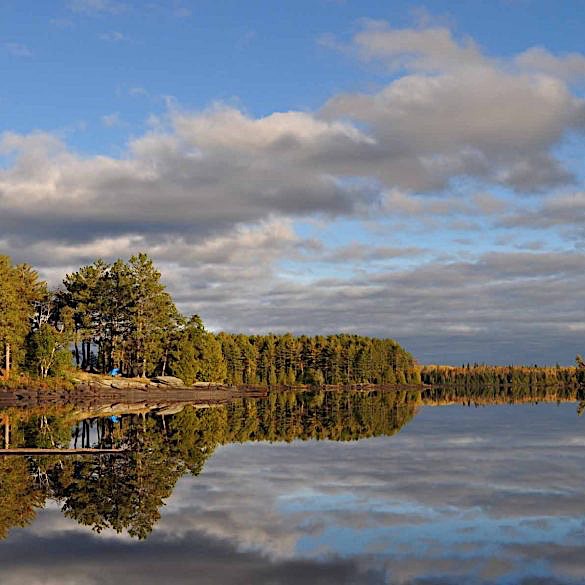 The calls are the signature of a flock of giant birds, eight in number, but they are the least bird-like birds your loon’s eyes have ever encountered:  possessing a clumsy second pair of legs where their wings should be, all are featherless but also covered in fake plumage, and, craziest of all, they carry reusable, dry nests on their backs, flapping across the water in hallow trees.  Their baffling calls, staccato and tangled, never cease.  You’ll follow them until you can solve the riddle of the giant birds’ calls.  What do they mean?  Then you can begin the long flight south from what’s been home for the last five months…

In addition to being the summer residence of common loons from the southern and eastern United States, the Boundary Waters, that soggy no-duck’s-land that both separates and connects the American North to the Not-American Even-More-North, has for over a century served as an object of fascination for the continent’s heartiest adventurers.

One such derring-doer is Mikah Meyer.

Meyer put himself on the map, literally, when he became the first person to explore all four-hundred-plus United States national park sites during a three-year Odyssey that would empty the tear ducts of Homer.  While exploring your land and my land, Meyer, a now-openly gay man, made a discovery about his fellow citizens living and playing on said land:  people who accepted LGBTQ folk were, in the most rural acres of America, depressingly hard to find.

Mikah Meyer set about creating a method of making such allies visually accessible.  Meyer created an initiative that offers a signature rainbow tree logo manifested as pins and stickers, T-shirts and fanny packs for rustic non-haters to identify themselves wordlessly to their possibly-uneasy queer colleagues—the ambitious program is called Outside Safe Space.

Designating as a safe space a part of the planet where free range bears could consider any given camper a potential honey thief might seem an extant contradiction, but Meyer’s experience contradicts the contradiction.  “In the sense of nature, that’s an equal unknown that every intrepid person faces, regardless of their sexual orientation or gender identity,” he observes.  “So the goal of the Outside Safe Space is to help people act more like nature, and treat people equally without judgment.”

In order to put Outside Safe Space into practice, of course, Meyer had to journey Outside, bringing kindred spirits along to share the experience.  “I had the idea of offering a retreat trip for LGBTQ employees of outdoor brands,” Meyer remembers, “since many of those brands don’t offer LGBTQ Employee Resource Groups the way other major companies do.”

If that statement represented a thrown gauntlet, it was picked up by Jason Zabokrtsky,  founder and manager of Ely Outfitting Company.   “[Mikah Meyer and I] are guiding two LGBTQ Boundary Waters trips this fall,” Zabokrtsky declares.  “One is with Mikah and is already full.  The other LGBTQ trip is September 4th through the 8th.  We still have spaces available for that guided trip that does not include Mikah on trail…though we will be channeling Mikah’s awesome outdoor LGBTQ energy!”

“This adventure includes a fully outfitted and professionally guided four-day/three-night [Boundary Waters Canoe Area Wilderness] canoe camping trip and is open to all who identify as LGBTQ,” the event’s website elaborates.  “You’ll be geared up with the best canoeing and camping equipment, right down to your comfy, freshly-laundered sleeping bag. All you need to bring are your clothes, and a thirst for adventure.”

The outing proper will be preceded by a September 4 group orientation because trekking into the Boundary Waters with a plan is an adventure while trekking into the Boundary Waters without a plan is likely to get your puss emblazoned on milk cartons throughout the central time zone.  The group orientation is succeeded by packing because the kind of people who can thrive in the woods without packing are not the kind of people you want to hang with for days at a time.

On September 5, 2022, the trip, guided by Zabokrtsky, begins in earnest, and then…and then…well, adventure ensues, and adventure, by its very nature, defies forecasting.  “That’s the exciting part of this adventure to the Boundary Waters,” Mikah Meyer notes.  “Unlike our normal days where so much of our schedule is predictable or anticipated, outdoor adventures provide the ability to be awed at a moment’s notice.”

That lack of structure is, in fact, adventure’s defining characteristic.  “I don’t know a single outdoors fan, from beginners to expert guides, who isn’t cautious about at least one aspect of going into wild spaces,” says Meyer.  “But that’s part of what makes it an adventure, the unknown, the possibility of things not going perfect.”

Perhaps the trip provides its own breed of perfection, one composed of land and sky, water and wind, and all points in between.  As Mikah Meyer puts it:  “Even in our constantly digitally-connected world, where one can see any point on Earth from the smartphone in their palm, there are views and experiences that can’t be captured digitally, and this journey will provide ample opportunities for that unique experience.”

You’ve experienced it before, but the air filling your wings somehow feels more profound and more pure as it tugs at your feathers and your muscles, probably because you’ve solved the riddle, cracked the code of giant birds’ calls.  You watched the giant birds as they shared and splashed and slogged and shared some more, and it seems so obvious now:  their baffling staccato, tangled, ceaseless calls have one meaning, a meaning beyond boundaries, and that meaning is love.

For more information on the LGBTQ Boundary Waters Trip, log onto: https://elyoutfittingcompany.com/lgbtq-boundary-waters-trip/

For more information on Outside Safe Space, also log onto: https://www.mikahmeyer.com/adventurepride