The story of Ireland is a story of migration, both in (Vikings, Normans) and out. But it was domination by the British (the one percenters of the day) that caused the most hardship, culminating in the Rebellion and Civil War. Just as American patriots fought their British rulers for independence in 1776, in Dublin during Easter Week 1916, Irish patriots revolted against British domination too, with a far more tragic outcome. Badly outnumbered, after six days the rebels surrendered and their bold leaders were shot. This year, the Rising of 1916’s Centenary is hailed throughout the city with special activities, exhibits and museum launches, focused on “reflecting on the past, re-imagining the future.” 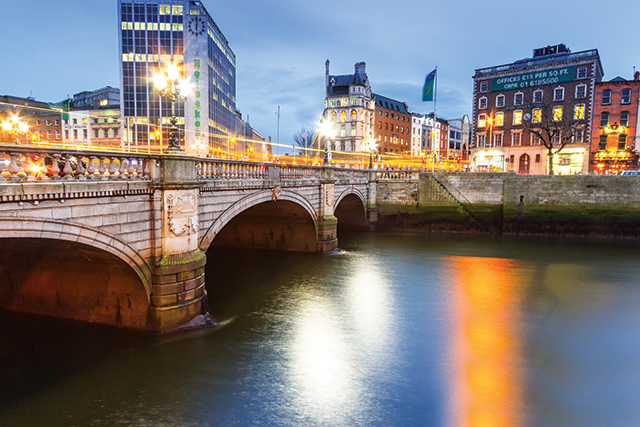 Back then, public opinion aligned with the Brits, for many Irish had joined the British Army during World War I. But after a firing squad brutally executed the Rising’s 14 leaders, sentiment swung to the rebels’ cause, paving the way for the formation of the Irish Free State in 1922.

The Rising has become “the most analyzed seven days in Irish history,” declares Bernard, togged out in khaki as we hop aboard a military transport van of the times for a 1916 Freedom Tour (www.1916tour.ie). He unfolds the rebels’ original plan to occupy strongholds circling the city, but when only 1,200 hardcore volunteers heeded the call, time for Plan B. We drive by rebels’ HQ in the General Post Office, where, for a brief moment of glory, a green flag (homemade from a blanket) flew until the building — the whole street — was engulfed in flames. The resurrected GPO has opened a new museum tracing the course of the action. The Barracks Museum also has devised a moving exhibit of photos, artifacts (including that green blanket) and last letters of the 14 executed, plus the signed surrender document.

The National Photo Gallery displays photos of the week’s assault. The Little Museum of Dublin fills its walls with a cartoon account of Irish history highlighting The Rising. (Other exhibits in this “most visited” of Dublin’s museums include a tribute to its idolized band, U2.)

The van delivers us to Kilmainham Gaol, a hellhole for criminals and political prisoners, including those that faced that infamous firing squad. Then it’s on to Glasnevin Cemetery (resting place for 1.5 million Dubliners) for its 1916 walking tour. Flowers brighten the gravestones of rebels, British soldiers, and the 500-plus innocents caught in the crossfire. (The cemetery’s most-visited grave is that of Michael Collins, hero of the ensuing War of Independence, played by Liam Neesan in the recent film.)

The story continues at the famed Abbey Theater (home of the Guthrie’s longtime director Joe Dowling) with its revival of The Plough and the Stars, which portrays the Rising’s sordid side: looting, cowardice and bystanders’ unnecessary deaths. Reviled as unpatriotic at its 1925 debut, today it’s hailed as one of playwright Seán O’Casey’s masterworks.

But bullets are long gone. The Garda (police) don’t even carry guns. Here, they’re friendly as your favorite uncle, escorting map-challenged folks like me around its corners. Passers-by, too, pause at the mere rustle of a map to guide me on my path. Dublin is a compact, obsessively friendly, easily walkable city. (Bonus: They all speak English; well, sort of. It’s puzzling how “five” can turn into a three-syllable word.)

I’m greeted with “Howya keepin’, madam?” when I turn up at O’Donoghue’s Bar for its nightly music session. I’m greeted with bear hugs by Tony, concierge at The Fitzwilliam Hotel on St. Stephen’s Green, Dublin’s favorite park. Once grazing fields for sheep, it was spruced up by the Guinness family, city benefactors as well as providers of its beloved “mothers’ milk.”

The brewery is Dublin’s most-visited attraction. A tour explaining the brewing process climaxes at the rooftop Gravity Bar for a pint and 360-view of the city. Across the Liffey, Old Jameson Distillery competes with a space-needle elevator and tasting room for its cherished whiskey. Here, north of the Liffey, I saunter up O’Connell Street, past the GPO, to the Dublin Writers Museum, with tales of homeboys from Swift to Stoker, from Wilde and Joyce, to Nobel winners Yeats, Shaw, Beckett, and Heaney. Nearby, Hugh Lane Gallery shines with modernists from Monet to Mondrian, including the studio of Francis Bacon, resembling the aftermath of a tornado.

Cross pretty Ha’penny Bridge to the south bank to walk your way through Irish history, starting at the National Museum of Ireland’s archaeology branch, with treasures from the Stone Age onward, preserved for centuries in Ireland’s peat bogs. That’s where they found mummified Clonycavan Man of 200 B.C., complete with his stylishly gelled pompadour. Gaze on the bell of St. Patrick, who brought his religion to Ireland well before the Vikings landed in 800 A.D.

Christ Church Cathedral of 1030, the oldest building in the city, boasts the tomb of Strongbow, the Norman warrior who took over. The renowned dean of its neighbor, St. Patrick’s Cathedral, Jonathan (Gulliver’s Travels) Swift, lies buried beneath its glimmering stained glass. Handel’s “Messiah” (the organ he played is on view) was first performed nearby.

Continue to Dublin Castle, seat of English rule for 700 years, and behind it the Chester Beatty Library with its gorgeous cache of illustrated religious books, from early Torahs and Qu’rans to the oldest discovered fragments of the Bible, including Paul’s Epistles, written on parchment in 180 A.D. You’ll find the revered Book of Kells at Trinity College, where eager students offer campus tours.

If architecture is your passion, Martin Dalton of Architecture Tours Ireland is your man — mine, at least, for a freewheeling romp that starts with the serene Palladian symmetry of St. Stephen’s Green, then on to nearby Merrion Square, the ’hood of Georgian aristocracy (Duke of Wellington to Oscar Wilde, whose tart epithets and lounging statue adorn one corner). Informative and opinionated, Martin’s eyes dance when pointing to newer additions that blend well with their gracefully aging neighbors, but shoot sparks toward the occasional unfortunate “improvements.” We ogle fanlights above the famous painted doors, then trot toward Temple Bar (the city’s SoHo) and remains of the ancient Viking Wall.

Bubbly Aoife McElwaine leads a tasty tramp called the Fab Food Trails: eight visits starting with Sheridan, a cheesemonger who regales the excellent quality of Irish milk as we munch on samples. Pepper Pot Cafe, in the posh Powerscourt shopping mecca, offers farm-smoked salmon. After a swig of silky Powers whiskey in the ultra-Victorian Swan Bar (original marble and brass) it’s on to George’s Street Arcade and a hearty sausage roll, a “guaranteed” hangover cure. Cocoa Atelier provides 20 varieties of handmade chocolates; then a raw oyster down the hatch at Temple Bar Food Market.

Time for some serious eating, and The Shelbourne hotel is a super place to start, from house-cured salmon and Kilmore Quay cod to bread-and-butter pudding. Avenue by Nick Munier, going up-tempo in Temple Bar, swears by its Harty Oysters (and so do I), which made way for scallops atop squash puree with citrus foam; then its famous 60-day dry-aged beef.

Upbeat Fade Street Social does wonders with scallops too, dressing them with smoked salmon and butter mousse. Follow up with its deconstructed granny’s Irish stew, showcasing balsamic-endowed fillet with puddles of potato mousse. End the orgy with another bread-and-butter pudding, this one embellished with salted peanut ice cream. Farm, celebrating all things organic, features Irish crab cakes with lime and coriander, sea bass on cauliflower puree, an Irish charcuterie board, and fish pie. Bang Restaurant makes a bang, indeed, with its modern takes on Irish classics, as in oxtail and bone marrow gnocchi, lamb rump and slow-cooked shoulder, and salt march duck breast.

Where’s the fish and chips, you ask? Alive and batter-coated at pubs like Wuff on one side of the Liffey and on the other, Davy Byrne’s, the pub where Leopold Bloom hangs out in Joyce’s famed Ulysses. For more Joyce, head to the “dark, gaunt house” of Joyce’s aunt that forms the setting of The Dead. Owner Brendan Kilty (gregarious, tale-spinning, impractical, passionate, and dreamer in equal measure) saved the house from ruin and serves Joyce-themed dinners (www.jamesjoycehouse.ie) in cahoots with Rory, who anoints himself The Druid Chef. He’s cooked for Princess Di, for Michael Jackson, but tonight he’s preparing blackened salmon salad and beef medallions for us. “All great literature is Irish,” Brendan proclaims, and clearly the greatest of the great is: Joyce. And all great hosts are Irish, too. Come see for yourself!