When it comes to ice-cold libations, I generally tend to be a man of moderation, saving those frosty pints of fermented joy for special occasions and outings with my social circle. So when the time comes for going out for a brew, I take care to keep an eye out for those Twin Cities breweries with a certain je nas sais quoi, mixing malted hop goodness with a delightful ambiance, distinct personality, and loads of fun perks that don’t just include the drinks. So here is a week’s worth of local breweries that’ll wet your whistle in no time flat. 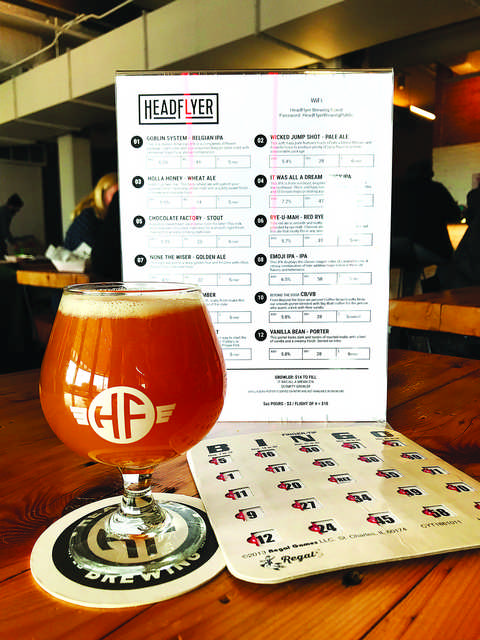 Every Sunday, HeadFlyer Brewing offers “What Up, G?!” Bingo for free.
Photo by Mike Hnida

HeadFlyer Brewing
Sunday’s best known as the day of rest, so what better way to chill out than an afternoon of beer and Bingo? In Northeast Minneapolis, enjoy a day of leisure at HeadFlyer Brewing, an easygoing and spacious establishment set to celebrate its first anniversary this month. 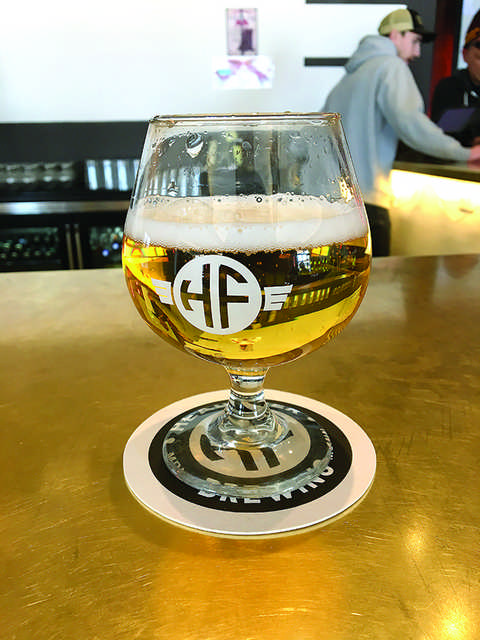 The None The Wiser golden ale is
all the tastier at HeadFlyer Brewing. Photo by Chris Tarbox

Boasting a large projector for game day and a handsome patio area facing East Hennepin Avenue, HeadFlyer offers free “What Up, G?!” Bingo every Sunday afternoon, featuring clever twists on Bingo that you never saw at your church’s fish-fry get-togethers. Prizes include free beer, growlers, and HeadFlyer merch. The dog-friendly brewery is perfect for a low-key Sunday.
Tarbox Suggests: The citrus-infused None The Wiser; the smoky goodness of the Freckled amber ale
861 E Hennepin Ave.
Minneapolis
www.headflyerbrewing.com 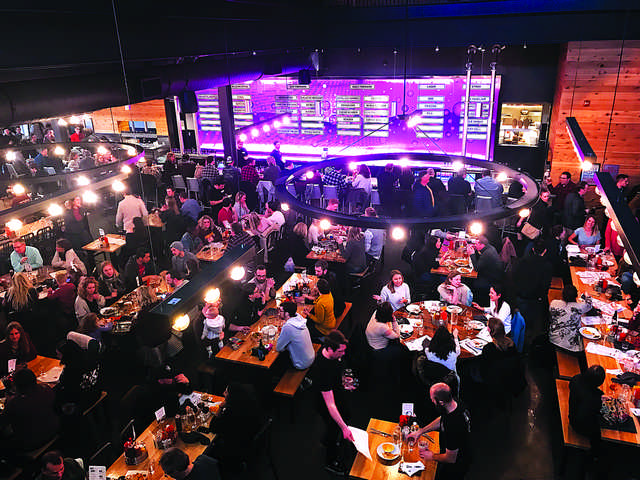 Surly Brewing Co.
Well, the work week has officially begun. You deserve a drink! And while you’re at it, you deserve a damn good meal. That’s where Surly comes in. The brewing juggernaut’s massive facility, just east of the University of Minnesota’s Twin Cities campus, is a triple threat of a brewery, beer hall, and a family-friendly restaurant, having just added a second-floor pizza parlor to complement its spacious main level beer hall. 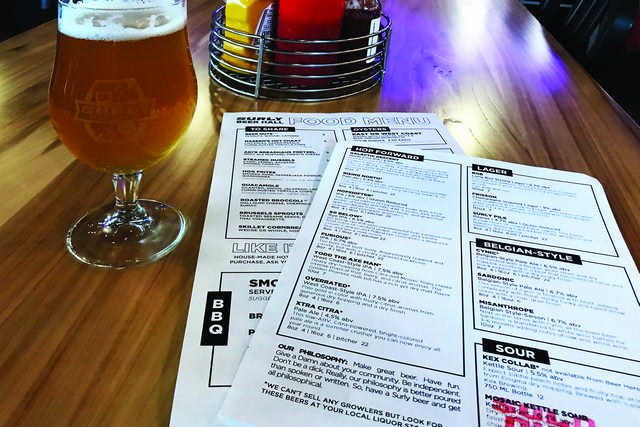 The energy at Surly is bound to be crackling regardless of when you go, and there’s plenty of gratuitously great grub to nosh on during your stay. Try the cornbread, for starters. You won’t regret it.
Tarbox Suggests: The champagne-style Frisson lager; the criminally celestial cluster of hops known as Galactic Descent
520 Malcolm Ave. SE
Minneapolis
www.surlybrewing.com 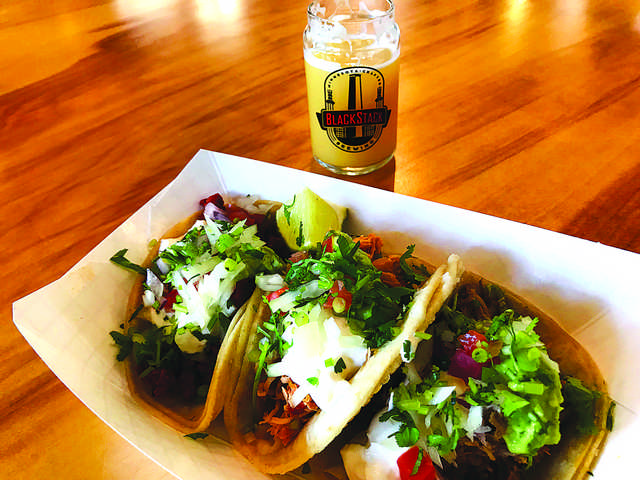 BlackStack Brewing
Okay, so you’ve survived the week thus far. You’re doing great. I believe in you. You deserve some tacos. And as luck would have it, the friendly folks at St. Paul’s BlackStack Brewing celebrate the third day of the week with Taco Tuesday. It’s a nice little bonus, considering that the vast, family-owned, warehouse-style BlackStack is a prime game night location, with loads of tabletop board and card games for you and your pals to spend a few hours playing. 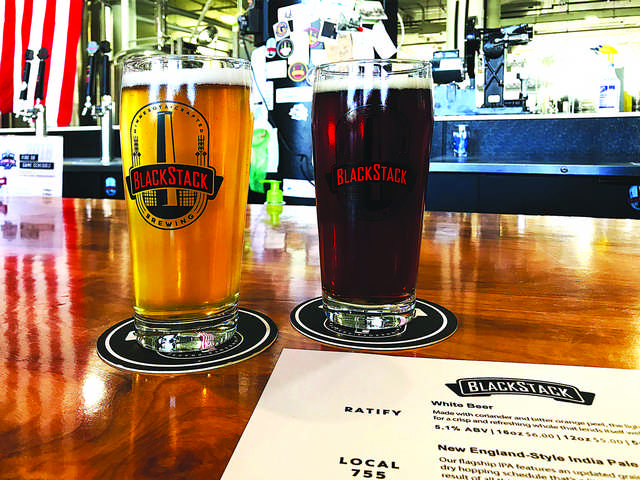 Nettie’s Cream Ale and the Dark Saison are just two of the tasty options from BlackStack Brewing. Photo by Mike Hnida

And if your hand-eye coordination needs improving, you can play a game of Bags with a beer in hand, or a taco on Tuesdays, courtesy of the talented folks from Taqueria Los Ocampo. And the beer? Top-notch. Don’t miss out on this one.
Tarbox Suggests: The infuriatingly delicious and malt-heavy Nettie’s Cream Ale; the critically acclaimed, hop-tastic New England IPA Local 755
755 Prior Ave.
St. Paul
www.blackstackbrewing.com 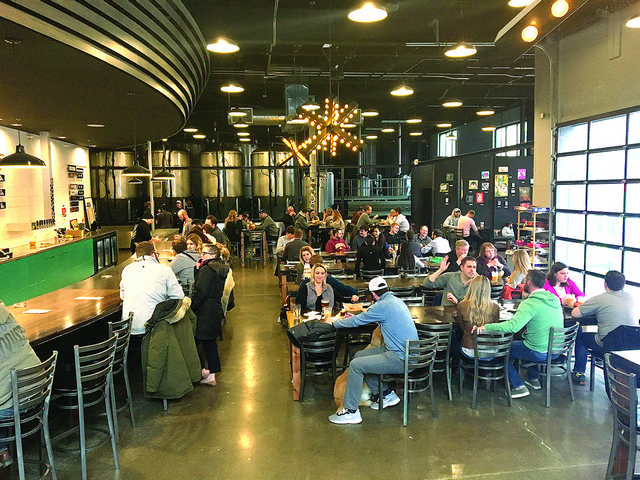 The cozy Modist Brewing Co makes its home in the North Loop section of Minneapolis. Photo by Chris Tarbox

Modist Brewing Co.
Hump Day is here. The work week is half over, but you still need that extra boost of confidence to galvanize your spirit. The prescription you need is an obvious triumvirate of beer, trivia, and cheese curds. The North Loop-based Modist Brewing Co. has been acclaimed for its experimental style when it comes to making beer, with wonderful oddities such as the Salted Caramel Lager and the Shook Pineapple Milkshake IPA. Right outside of Modist sits The Curious Goat food truck, which—in my humble opinion—offers the BEST cheese curds in the Twin Cities. Fight me. And on top of that, every Wednesday evening, Modist is home to Trivia Against Humanity, an eclectic alternative to the usual trivia outfits that—full disclosure—yours truly co-hosts alongside TAH creator Sam Spadino. Come for the curds and trivia. Stay for the Modist experience.
Tarbox Suggests: The dry and delectable Japanese-style Supra Deluxe Lager; the oh-so-sweet-it-can’t-be-beat Shook Pineapple Milkshake IPA
505 N 3rd St.
Minneapolis
www.modistbrewing.com 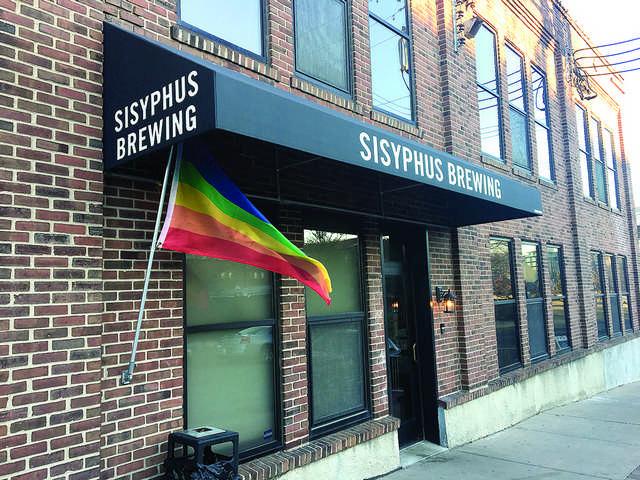 Sisyphus Brewing is located blocks away from the Walker Art Center and Sculpture Garden. Photo by Chris Tarbox

Sisyphus Brewing
First off, any brewery named after a Greek mythological figure is immediately worth checking out. And this brewery in particular, located a hop, skip and a jump from the Walker Art Center and Dunwoody School of Technology, is a definite must if you like your breweries small yet bustling with personality, and if you like a brewery that also doubles as a slick comedy club. 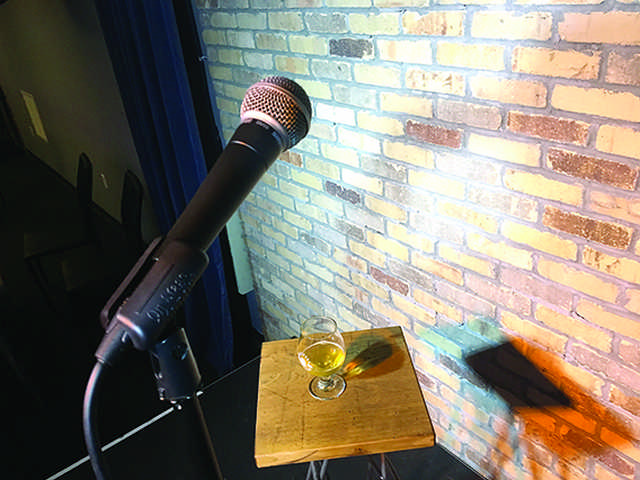 Feeling brave? Snag a Maris Otter lager and sign up for Amateur Comedy Hour at Sisyphus Brewing every Thursday. Photo by Chris Tarbox

Every Thursday, Sisyphus features an open mic amateur hour hosted by Corey Adam, a free event where you can sign up for three minutes of stand-up infamy. And if you’re a first-timer, you’re guaranteed a spot on the evening’s roster, so have those dad puns at the ready! And to amp yourself up, make sure to play some of Sisyphus’ pinball machines or grab a bite from the Finer Meats food truck right outside.
Tarbox Suggests: The oaky surprise of the Maris Otter lager; the Cinnamon Roll Imperial Stout, the dessert beer you never knew you needed
712 Ontario Ave. #100
Minneapolis
www.sisyphusbrewing.com 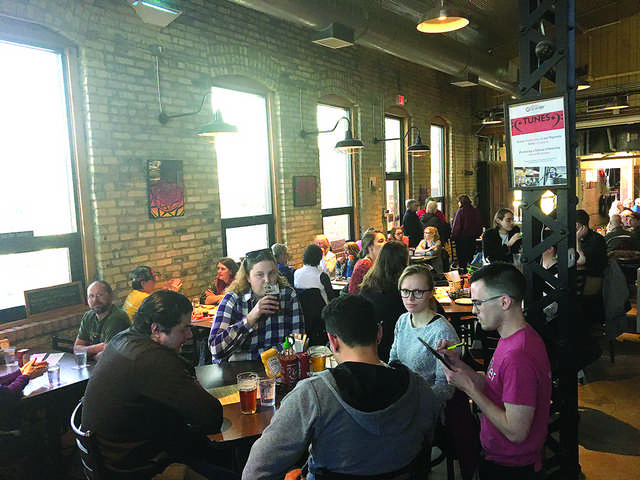 Urban Growler
You’ve made it. The work week is DONE. You’ve earned a much-needed trip to the brewery, and it’s tough to think of a better post-work option than the homey, intimate environs of St. Paul’s Urban Growler Brewing Company. The first woman-owned microbrewery in Minnesota—not to mention co-owned by real-life couple Deb Loch and Jill Pavlak—Urban Growler boasts an almost deceptive restaurant-style aesthetic, with an excellent selection of food to go with your pint. 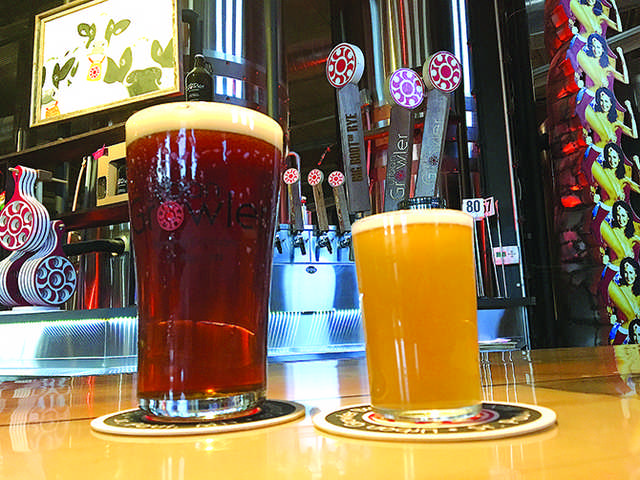 In the mood for an old-fashioned India Pale Ale? Try Urban Growler’s Midwest and White IPAs. Photo by Chris Tarbox

But that won’t obscure the fact that this is a brewery first and foremost, with a fantastic selection of IPAs, cream ales, porters, and seasonal delights. And on Fridays, the brewery offers a Wisconsin fish fry to seal the deal. Urban Growler is an absolute gem for you to start your weekend right.
Tarbox Suggests: The bitter and bold Midwest IPA; the seasonal, Belgian yeast-infused standout White IPA
2325 Endicott St.
St. Paul
www.urbangrowlerbrewing.com 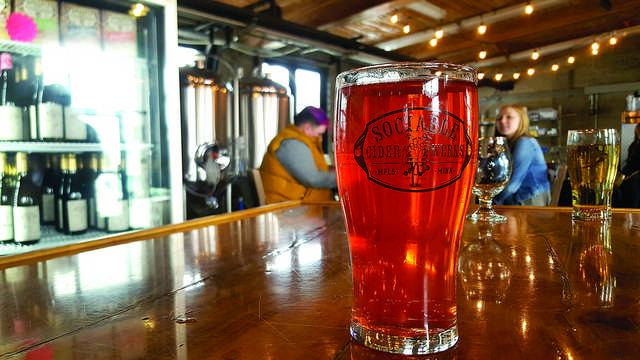 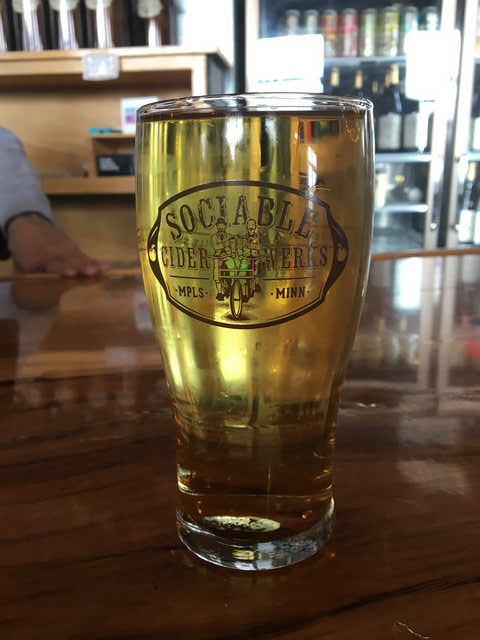 The dry apple Freewheeler is one of Sociable’s more popular ciders. Photo by Chris Tarbox

With a lovely hardwood-and-concrete aesthetic, a giant patio and parking lot area, and free brewery tours every Saturday, you’ll be in apple heaven. Plus, you can supplement that cider with delicious eats courtesy of the Red River food truck, and you can bring your doggos along for the fun! In any event, the casual and super-friendly Sociable is the perfect way to end an adventurous seven days of brew-crawling.
Tarbox Suggests: The tart and tasty dry apple Freewheeler; the floral and aptly named Hop-A-Wheelie
1500 Fillmore St. NE
Minneapolis
www.sociablecider.com