Holly Peterson takes a sneak peek at Bar Brava, a natural wine bar set to open in Near North later this month.

“Minnesota has been craving for a quality wine bar for a while. There’s a great beer, cocktail, and food culture here, but when I moved back to Minnesota and was searching for a place to drink natural wines, nothing existed.” Dan Rice, an Apple Valley native who spent several years working finance in New York, immediately realized the opportunity he had to fill this small, but not insignificant, natural wine bar shaped gap in Minnesotan food and beverage culture.

“So Bar Brava was concepted,” Dan grins. “Brava in Spanish means ‘brave’, and in Catalan, it means ‘wild and rugged.’ ‘Brava’ speaks to the style of wine that we’re serving. ‘Brava’ speaks to natural wine makers and what they stand for. But also, people told me we were crazy to put a wine bar next to BJ’s.” 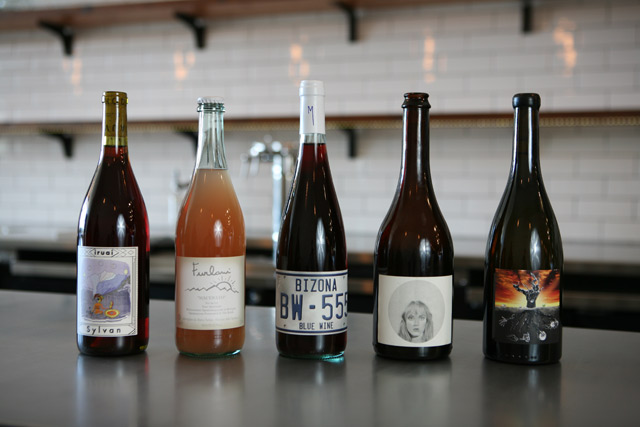 About half of Bar Brava’s natural wine selections will hail from Spain, with a broader variety to follow.

The location is a little surprising. Conveniently off I-94, Bar Brava is just down the street from BJ’s Liquor Lounge, the only Minneapolis topless bar that exists outside of the city’s adult district. Nestled in this quiet, industrial-feeling portion of Near North, Bar Brava feels out of place, but in a diamond in the rough kind of way. It’s the hidden gem that you’ll want to show your friends.

Bar Brava’s interior is bright and intimate; modern and cozy. Natural light pours in the front windows and the huge Edison bulbs make the stainless-steel bar glow. It’s perfect for day drinking and late nights alike. Or maybe both on the right day.

With the obvious caveat of “drink responsibly”, the 100 percent natural wine list is easy to sip on. Natural wines tend to have a lower alcohol content, and since there are no additives to the organic grapes, natural wines are less likely to leave you feeling sick. Added bonus: natural wines have a uniquely bright, clean profile, which Dan laughingly described as “delicious grape juice.”

Want to have a little bit of fun drinking your wine at Bar Brava? Give the porro?n a shot.

The other half of the Bar Brava team is Nick Anderson, who has created a perfectly snacky bar menu, which he plans to keep on rotation. “I cut my teeth cooking in California, so I’m super influenced by Californian bar food. Very vegetable-heavy, brighter flavors, lots of herbs. Everything, minus a couple items, is meant to be shared and snacked on while you’re drinking.”

“The menu has something for everyone, whether you’re a vegan or meat eater or anything in between,” says Dan. A quick glance over the projected menu for Bar Brava’s opening confirms that assessment. Noodles, toast, salad, trout, brussels sprouts, steak. From the basic to the bougie, there is something for everyone to enjoy.

The porro?n allows you and your friends to share some delicious natural wine without your lips touching the spout.

There are a few gold standards to look forward to. According to Nick, “one of the staples will be the Spanish tortilla. We’ll make that every day and serve it by the slice until it’s out. You see that at every single bar in Spain. People eat it morning, lunch, and dinner.”

“We’ve all spent a lot of time in Spain,” Dan explains. This influence is also apparent in the wine selection. The wine list will mostly likely hover right around 50 percent Spanish wines. Although none of that remaining 50 percent is currently Minnesotan, Dan thinks that will change soon. Montreal and other similar climates have created natural wines with cold-climate-friendly hybrid grapes. “It’s just a matter of time until we get natural wines here in Minnesota,” he says.

There is an important tertiary member to the Bar Brava team. Jill Mott, notorious Minnesota sommelier, is Bar Brava’s wine director, aptly described by Dan as “the brains behind the operation.” Jill was busy training Bar Brava’s staff when we stopped by, but her knowledge was extensive, her excitement contagious, and her skill with a porrón, enviable. 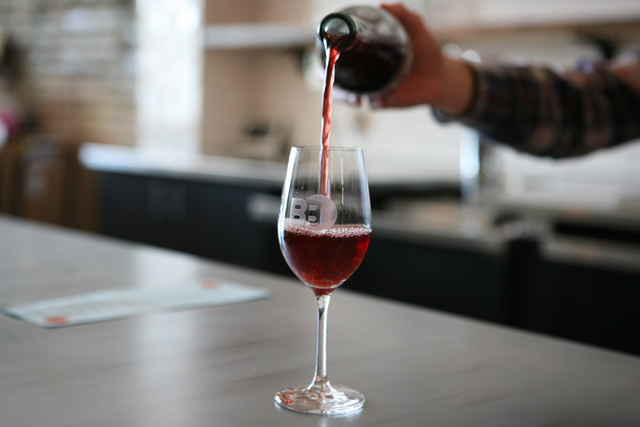 Bar Brava will offer an amazing variety of natural wines to choose from.

The porrón is one of the many reasons why Bar Brava has the potential to become a Minneapolis staple. Bar Brava offers a small discount for ordering wine in a porrón, but the more compelling reason to use a porrón is the fun. Originated in Catalonia, Spain, the porrón is part drinking vessel, part decanter. Its small spout makes it easy to pour straight into your mouth without spilling, so it’s easy to share a bottle of wine around a group without anyone touching the mouth of the bottle.

Did I mention that it’s fun to drink from? It’s so. Fun. To. Drink from.

I cannot recommend a stop at Bar Brava strongly enough. Dan, Nick, and Jill are knowledgeable, friendly, and incredibly enthusiastic. The wine is refreshing and delicious, there will be guest appearances from local food producers and natural winemakers (an experience described by Nick as “the most magical thing,”) and I cannot possibly sell the joy of drinking out of a porrón hard enough.

Bar Brava is set to open their doors in mid-November 2019. For updates, check out their website at www.barbravamn.com. They’re also on Facebook as Bar Brava MN and Instagram @barbravamn.