Drifting Down the Danube

I can’t resist a fire sale. Lurking amid the daily deluge of emails was one that stopped my heart: a Viking River Cruise shaving the usual ridiculous single supplement and paring airfare to — not a misprint — a mere $100. Can’t stay home for that price. So I wrote a check for a week-long Danube cruise on a 180-passenger ship including all (restaurant-quality) meals and freely pouring wine, as well as free walking tours of stops along the famous river. The clincher was a chance to linger in Budapest at the end of the tour. 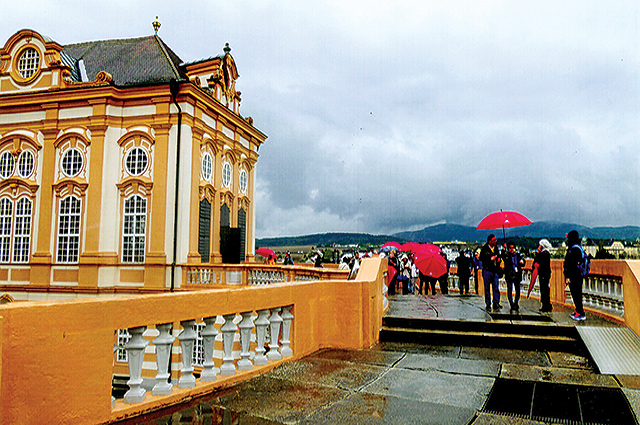 But first, sweet little Passau, in Churmany (as our guides called their native land): straight out of a medieval atlas, complete with 15th-century castle-fort overlooking the imperial town hall, and, behind it, the impossibly Baroque St. Stephen’s Cathedral, crawling with curlicues, lashings of gold leaf, and an outsized organ. By contrast, tiny Kloster Niedernburg of 1150, white and chaste, sheltered sculptures of earnest Gothic saints.

Fast forward to another Passau monastery that today is home to the Museum of Contemporary Art, exploding with Expressionist surprises. From there, follow the cobblestones to Hell’s Alley, the modern-day home of indie crafts and artists’ galleries.

Gliding again along the Danube (sorry: green, not blue), it’s quiet enough to hear birdsong from passing forests as we dine on Napoleon of crab and tuna tartare, grilled perch (or sirloin), and passion fruit mousse on our way to Austria. Linz, its third-largest (yet cozy-small) city, was first settled by traveling Romans. Towering over its main square is a voluptuous, gold-crowned column, erected in 1763 as thanks for averting the plague. But it failed to stop the plague fomented by its homeboy, Adolph Hitler, who returned to stand on the very balcony I’m photographing to announce his annexation of Austria. 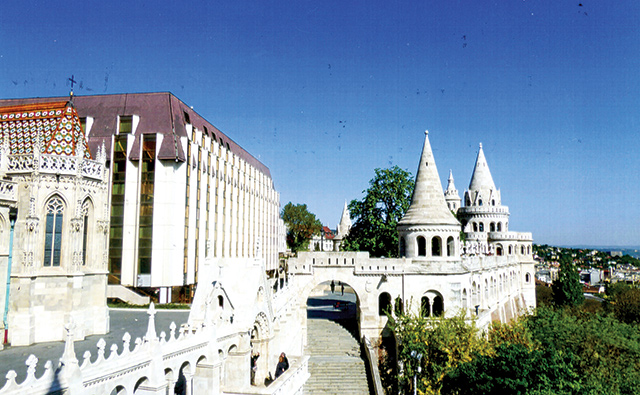 Find respite in the cathedral where composer Anton Bruckner played the organ, or the Rococo charmer where Mozart worshiped while writing his Linz Symphony. Hearing music wafting from the Ursuline church, I pause for a free concert of the Linz Chamber Orchestra and a very loud soprano, then head to Lentos, the city’s provocative Museum of Contemporary Art, where Warhol and Oldenburg vie with spicy Austrian Secessionists Klimt and Schiele. Then dinnertime and a feast of smoked salmon draped in caviar, Chateaubriand or mahi, and Valrhona chocolate tart as we set sail for Melk.

And there it is, looming on a clifftop: the famed Melk Abbey, a twin-towered Baroque confection showcasing precious art, a renowned library and fancy chapel (it’s the sister abbey of our own St. John’s). But it’s nature I’m worshiping as we slip along the Wachau Valley amid vineyards and silhouettes of castles till we anchor at tiny, camera-ready Dürnstein, where the foolish or intrepid can undertake a 30-minute climb to the castle where Richard the Lion Hearted was held prisoner.

My knees complained the next day as we trade bucolic scenery for the scintillation of Vienna. We have a full day to conquer the regal city, with free walking or bus tour before striking out solo to traipse amid the monumental monuments to their own glory erected by the Hapsburgs. And the Opera House. And St. Stephen’s iconic cathedral. The Jewish Quarter. The shopping streets, anchored by rival pastry palaces Demel and Sacher, dueling it out over the city’s famous torte. Then the Naschmarkt’s teeming lanes of food stalls, and nearby Secessionist Museum, with its Art Nouveau Beethoven frieze. More Secessionists, at their naughtiest, in the MUMOK and Leopold Museums of the Museumsquartier, with its vast forecourt of cement loungers claimed by sunning locals. 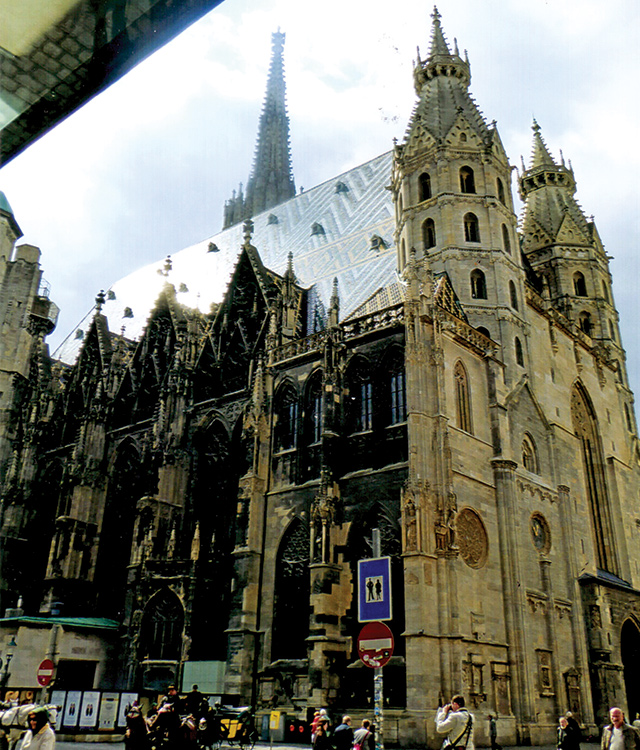 Running on empty, I head to the venerable coffeehouse/café Griensteidl — think burgundy drapes and velvet banquettes serviced by aging waiters in formal black and white, who greet me with “Grüss Gott,” then deliver my paprika chicken with spaetzle before a parting “Auf wiedersehen.”

Our first glimpse of Bratislava, the riverside capitol of Slovakia, is its looming hilltop castle. It oversees a town of modest charms populated by plucky folks who are still emerging from the punishing times of Nazi, then Soviet, rule. The 14th-century St. Martin’s Cathedral has outlived all that. It’s topped not with the usual cross, rather the Hungarian crown, for under that empire, kings were crowned here for 250 years. Beethoven’s “Missa Solemnis” was first performed within, where Liszt and Mozart also played. Today a Holocaust memorial rises in its shadow, aside a wall of vibrant graffiti.

Best for last: After passing through our final set of locks (cheering shoreside soccer players as we waited), we approached Budapest at its most breathtaking: ten at night, when thousands of lights dance a welcome from its iconic castle on the Danube’s Buda side to its famous Parliament marshalling Pest’s shore, linked with blazing bridges. How can you fail to fall head over heels for a city as pretty as this?

By morning we made fast work of the usual bounteous breakfast (eggs Benedict, anyone?) and hit the sites, starting with a funicular ride up Buda’s hill to traipse aside that mighty castle, on to St. Matthias Church and aside it, the Fishermen’s Bastion overlook, like a mirage from Disneyland. Then back across the river by tram to ramble along Andrássy, the Champs-Elysees of Budapest, past the elegant Opera House, the Paris Department Store (nowadays a grand bookstore-cum-gorgeous café), up to Heroes Square, lined  with larger than-life statues.

From there, a tram ride to the Central Market (same designer as the Eiffel Tower), crammed with edibles and crafts, then back to Parliament and, close by, St. Stephen’s Cathedral, rivaling his holy home in Vienna. Inside, votive candles lead to the saint himself — well, at least his right hand — preserved in a side chapel. 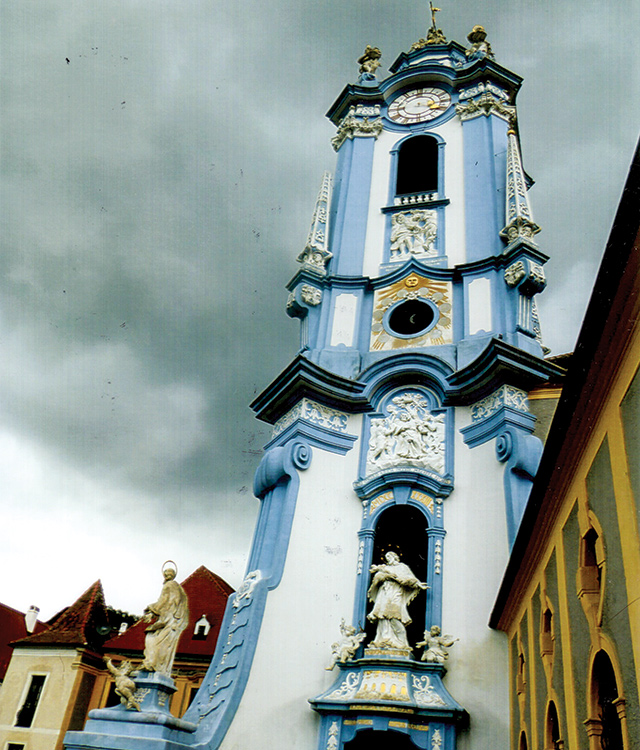 Then, free time! I lost my way in the maze of the Jewish Quarter, where, despite the murder of half its citizens, three grand synagogues remain. As does tiny Spinoza, hangout of the artsy set. But I was there for the food: a lunch of goulash soup, roast goose with red cabbage and potato cake, then apple strudel. And beer.

Sated, I explored Budapest’s myriad museums: The National, detailing the story of its saints and kings, backed by glittering crowns and crucifixes. Next, the Museum of Applied Arts, a glorious Art Nouveau wonder, inside and out. Then the Ludwig Museum of Contemporary Art, showcasing works of potent political pushback to authority (one work: “Communism Never Happened”). Finally, the epic House of Terror, located in the former HQ of the Nazi, then Soviet, Secret Police, with its basement cells and accounts by survivors sent to the gulags.

Which calls for a coffee. Or two. I sought a cappuccino in Callas, an Art Nouveau beauty aside the Opera House, then Café Central, a throwback to the good old days of past centuries. After which, I promptly got lost. Friendly locals were quick to whip out maps on cell phones, walk me to the Metro station, whatever it took to assure I loved their city.

It worked. I can’t wait to return. For info, visit www.vikingrivercruises.com.