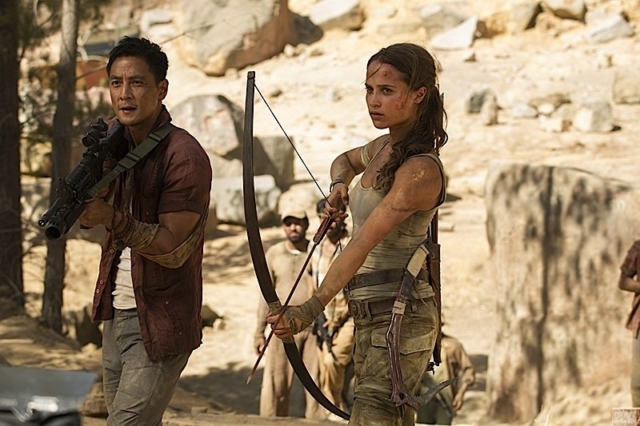 Video game movies have always had a jaded past, from Hitman where Timothy Olyphant plays a non-believable Agent 47; the Resident Evil movies now has its own bonkers storyline separate from the Capcom games; and we should never ever bring up 1993’s Super Mario Brothers again. It’s easy to cast a skeptical eye on this Tomb Raider, the latest take on a beloved franchise. Unlike the successful but much campier Angelina Jolie films, this version of Tomb Raider is a reboot based on the gritty 2013 game by the same name. The daughter of long-missing aristocratic adventurer Richard Croft (Dominic West), Lara Croft (Alicia Vikander) discovers a series of clues that lead to her father’s last quest, the tomb of Himiko. Driven to find father, Lara heads to the island, where she finds booby traps, deadly puzzles, and a slave labor-driven greedy corporation headed by the monstrous Matthias Vogel (Walton Goggins). With the help of her rebellious boat captain (Daniel Wu) and a mysterious figure from her past, Lara finds herself in the believable position of trying to get to Himiko’s tomb first.

Vikander does an excellent job as the young Lara Croft. If she wasn’t great in this movie it would be almost unwatchable, because she is in every scene of the movie.  Vikander plays Lara as someone who has yet to discover her own strength and purpose. The script really doesn’t give her much to work with, but when she is given something to work with she really goes for the gold.  Ultimately, her performance is strong enough to warrant several sequels, providing things go well for this highly flawed reboot. 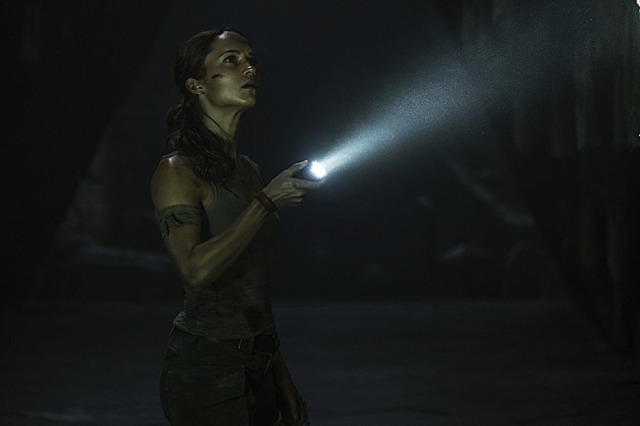 It’s really sad when the action scenes are the weakest part of an action movie. The action is over edited and overuses CGI so much that it takes away any sense of threat or physicality. The film also relentlessly focused on giving Lara a background for all of her actions. For example, for the opening MMA fight between her and another unnamed opponent, she practices to set up a later escape from a sleeper hold that every villain puts her in. This makes this feel like a video game, and not in a good way.

The movie fails to add any depth to its shallow protagonist, or any other character for that matter. Worst of all, you have to really try to waste Walton Goggins in a villain role, watching him play second fiddle to a mystical dead queen, the final nail in this “Bluh” of a forgettable movie.

The movie could have benefited from an R-rating. The 2013 game reboot was grittier and aimed toward the older audience that grew up with the franchise. The movie, on the other hand, is geared towards a much younger audience, or ones who have no idea that it is based on a video game.

What To Take Away

This movie is crammed with boring chases, average stunts and cheesy effects, all if it totally devoid of intensity. The puzzles are almost laughably simple, the dialogue is occasionally a little flat, and the good guys and bad guys get to be shot, stabbed or beaten to an inch of their life, only to jump up like nothing happen. Nonetheless, this non-exciting action-adventure movie will be given the franchise tag. It could have been worse; we could have had Lara Croft punching a shark…again.