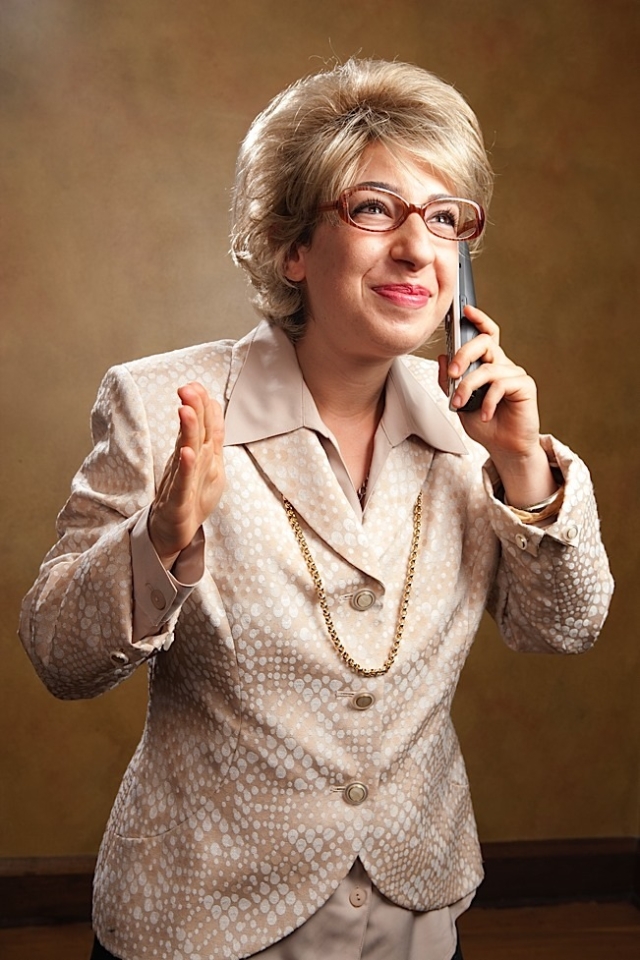 Actress Miriam Schwarz charms in Becoming Dr. Ruth, the solo bio-play about the life of Ruth K. Westheimer, a groundbreaker in straight talk about sex. Set in her New York apartment in 1997 when Ruth is 69 years old, playwright Mark St. Germain is more about celebrating than excavating this remarkable woman’s life. It plays at the Highland Park Center Theater as an engaging Minnesota Jewish Theater production directed by Craig Johnson.

There are captivating stories she tells us of losing her family to the horrors of the Nazis, being sent to Switzerland by Hitler’s nefarious Kindertransport, then having to deal with abuse there. Yet through it all, Ruth never lost her sunny disposition. A miracle in itself.

Indeed, Dr. Ruth is a unique figure who should be saluted by any person who values sexual freedom and expression and if you are peeved at her mixed feelings about NBA Player Jason Collins coming out, look deeper. She is no homophobe. Knowing what the Nazis did to gays and understanding how innately hostile vast numbers of Americans of all races are to gayness, she simply cautions to be aware of how coming out will affect you and the ripple effect it may well have on others. This, by the way, happens to also be a common view held by millions of out gays, lesbians, and bisexuals themselves. Hers is a valid perspective and too many activists still aggressively promote coming out even if and when it is unwise. Every single GLBT person in the U.S., closeted, out, or semi-out, has benefited from her vocal pro-sex attitudes.

That said, Dr. Ruth’s advice has usually been aimed at heterosexuals in love or with concerned parents. But she always maintained a sex-positive overview in the face of that and the primacy of there being respect among sex partners. Being a Jew who was up against the dark side so much when young, she got a visceral sense of what mattered and what did not. She has no trace of puritanism and she prizes classic Jewish attitudes on sexuality as being a natural and beautiful part of life to be relished and to be thankful for. And she knows the scripture to back her up!

When Westheimer hit the radio airwaves in the ’80s as an almost stereotypically sweet little matronly lady, she was numinously powerful as she busted that stereotype with cheery, logical, matter-of-fact sex talk at a time when sex in general was under irrational attack because of grotesque ignorance stigmatization surrounding HIV/AIDS and AIDS hysteria. She has been supportive of homosexuality and lesbianism and has championed safer sex. I think of her as someone who brought sanity and charm to the vitriolic attacks on persons with HIV/AIDS — an endearing woman who melted away erotophobia and perhaps, most important of all, shame. Just imagine a four-foot, seven-inch bundle of cheer, speaking with a German accent about all kinds of sexual issues, including kink, at the time when Ronald Reagan, Nancy “Just Say No” Reagan, and Jerry Falwell dominated the national zeitgeist.

Ruth set the table for future great sex talkers like Dan Savage and Cindy Gallop to dig deeper into concepts she gave the green light to. Those two wonderful sex thinkers stand on her shoulders. Not to mention, a widened public interest in serious sexual inquiry. Hence, the continued interest in formidable sexual insurgents like Camille Paglia and the late Gore Vidal, and the rise of brilliant contemporary researchers, such as Christopher Ryan & Cacilda Jetha. All these have a more receptive public thanks to Dr. Ruth shining her light.

Predictably, St. Germain plays it safe, bordering on shallow, which is characteristic of his plays. There’s no discussion of AIDS and, not surprisingly, he barely scratches the surface on the width and depth of Dr. Ruth’s sexual insights. But lucky for him, Schwarz saves the day!

Though Schwarz is far too young for the role, she captures Westheimer’s spirit and Jewish sensibility to fine effect and does her best to overcome St. Germain’s goody-two-shoes style. The audience the night I attended was clearly won over.