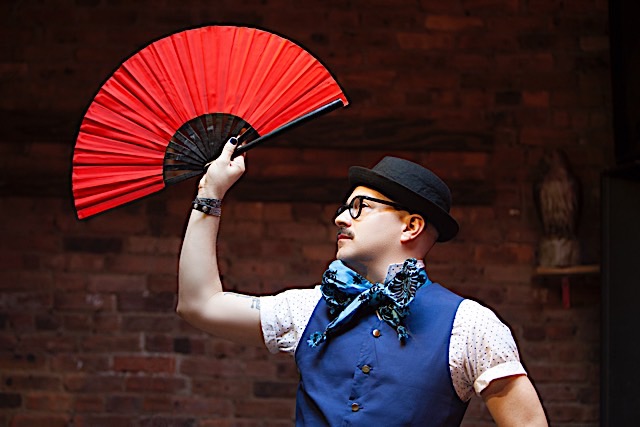 An anthem of self-love and acceptance, of capturing and taking control of your own destiny is Bobby Blue’s unrecognizable reimagined cover of Madonna’s classic song, “Don’t Tell Me.” Bobby Blue is a Costa Rican American countertenor singer and songwriter who has learned a certain way of communicating as a performer.

Blue grew up in a small town in Indiana. His mother and her four sisters moved to the area as the only Costa Ricans at the time. “Music was always playing,” says Blue, “as a Latino there’s a lot of high energy in the family. When they found out I could sing and dance, they put me in the front and yelled ‘dance! dance! sing! sing!’, and that’s how I started singing and it just went from there.”

As a countertenor, Blue can sing in the register of a woman and sound like the essences of that type of voice. From a young age his musicality impressed teachers with his original lyrics, and secured solos in choirs. He went on to find success in electronic and folk fusion music in the New York underground, playing with bands and independently at late night cabarets. After his first solo album came out, he began collaborating with DJ’s who remixed his songs that were followed by dance hit after dance hit. Blue says a breakup served as a wakeup call. “The fact is I’m not a dance artist, I’m a folk artist,” says Blue, “I had to go back to the roots and get into my mother’s music and my father’s music and really dive into working with that type of Western sound but psychedelic at the same time.” The history of his sound presents a message of “absolute togetherness,” says Blue, “and that is a thing to be celebrated. I think it would be nice to bring that back in today’s world.”

Blue reflects on the current climate of music and the amplification platforms like apps and streaming services have done for certain songs.  A prime example is Kate Bush’s song, “Running Up That Hill,” featured on the television show “Stranger Things,” Blue says, “a song can take 36 years to find a mass audience.” Things are slowing down when it comes to releasing music, popular video apps showcase 15 second snippets of songs that become wildly popular. You can get several clips from one song and no longer need to release single after single to promote an album.  Blue says, “It’s really given me a chance to really focus on this song, the instrumentation, and doing it so beautifully. This song will never go out of style.”

Blue has released a music video to accompany the song that features footage from the 1916 silent film “Hell’s Hinges.” The film is about a “root·in’-toot·in’ cowboy,” who lives his life in a very dangerous way, but then he meets someone who shows him the light that’s inside of him. “You can call it God, you can call it love, you can call it whatever you want,” says Blue, “but once he realizes the light inside of him, he is so stunned about what he feels inside, he can’t believe it.” Blue felt so much when he saw that section of the film. Then the film shows you his old life and then the town burning down. “Which indicates he’s burning his old life down and he’s going in a new direction, he’s moving forward,” explains Blue, “whatever that forward is for him, for you, for me, for anybody that’s what the music video is about.”

This theme fits the song so perfectly and the song’s message is nestled perfectly in a section of Blue’s show. His show aims to provide a romantic and cozy experience that mimics the feeling of, “being in a cantina on the ranch in Central America.” The set is an encompassing hug of music complete with his original songs, rockabilly, classic country, and Mexican rancheros and flamenco songs sung in Spanish. “It’s just got that whole vintage old feel,” says Blue.

“When I have something to say,” Blue explains, his creative process initiates,” and takes me to the stage. When you have a microphone in your hand and you’re on stage, you do have a kind of a responsibility to speak about just things. I make statements and so forth about unjust things so those things inspire me to be creative.”