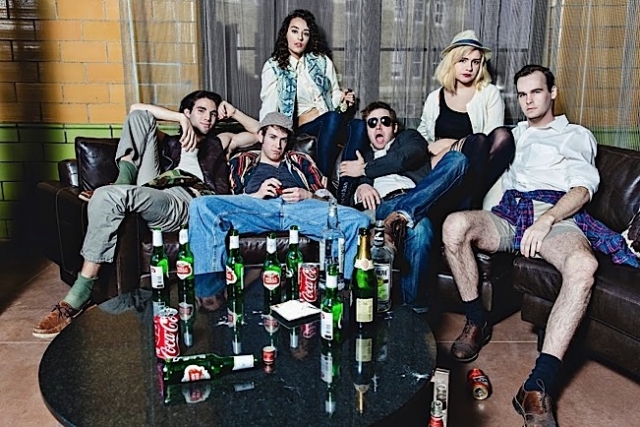 Men can be mysterious creatures. Sometimes that mystery is captivating and genuinely nice and darling to be around. Sometimes it can be brutal. It’s the brutal side that playwright-director Dominic Orlando and a courageous cast have so brilliantly mined is his new tragicomedy, The Reagan Years, presented by Workhaus Collective at the Playwrights’ Center.

As a bit of background, the play is set in 1988. Unlike today, the Republican Party was perceived as much more corporate-friendly than the Democratic Party. It would be another four years until the centrist “New Democrats” led by Bill Clinton would trump the Republicans on that and become the GOP’s rivals in corporatism, and ultimately, rivals in militarism. To point, Obama’s military spending recently surpassed that of Bush.

Therefore, we now see little to no real difference, especially in the realms of economics, war, incarceration, surveillance, and trade, which obviously all have major reverberations with just about everything else political. So, though Orlando’s view is spot on for the time and a savvy cultural history lesson, it lives in a different historical context. 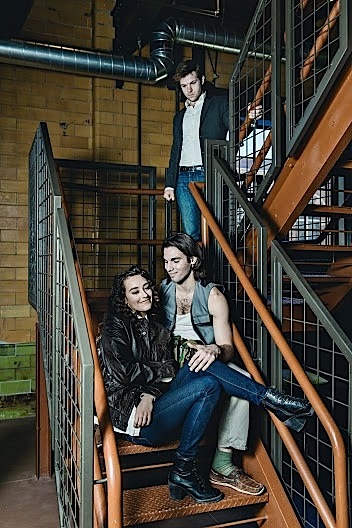 Within that ’80s context, the Combined Metallics conglomerate is what’s at issue throughout Orlando’s play. We can assume that CM is very much a monstrosity owing to deregulatory policies railroaded by the ’80s GOP. Indeed, Reaganomics, sometimes called Pac-Man economics, and its “trickle-down” theory, made their imprint and has been ratified by every single President and Congress since. So Democrats of the past two decades should certainly not be allowed to cast stones. And to be sure, many Dems in the ’80s would have enjoyed political contributions from the likes of Combined Metallics as well. (GOP propaganda, then, like now, promiscuously mislabeled even the most corporate Democrats as socialist.)

The Reagan Years is set in the guest house on property owned by the Combined Metallics head man. His son, Guy (Bryan Porter), has run of the space and has rented it to three college pals. They call themselves The Danger Brothers, and they go by such adolescent monikers as Walkman, Moth, and Frisbee. Guy holds financial, hence, psychic power over the buds. Porter’s winningly boyish looks belie a numinous alpha male power. I loved this performance and Orlando’s perception, as male power is typically associated with a colder image. But Porter’s Guy is “the boy next door”, though tell-tale signs of his sociopathic nature are shrewdly evinced. As the play progresses Porter unmasks dark dimensions that simply beguile.

The weekend before graduation is coming to a close and the guys have been partying to decadent excess, leaving the house strewn with beer cans and other junk associated with a college blowout. A giant tacky American flag made of wood pieces takes up the expanse of the upstage area. It was made by the ever-so-gentle Moth. The perfectly understated Michael Hanna plays the role with heightened sensitivity, which takes a stunning turn later in the play.

Frisbee (Paul LaNave) seems to be guy who is either stoned constantly or has perfected a continuously stoned demeanor into his ongoing personality. Is it a defense mechanism? Either way, he is a manchild -referred to by some in those days as a “Peter Pan”- who evades any modicum of responsibility. He’s what I used to call the “Hey Man” type in the ’70s and ’80s. Maybe we’d call him the “Hey Dude” type of today. You wonder if he’s internalized the personae of Cheech and Chong combined with Dennis Hopper to the point that he doesn’t even know who he is himself. Though the role itself, borders on the two-dimensional, LaNave is wonderful.

Walkman (Gabriel Murphy), the class valedictorian, has lucked into getting a juicy position at Combined Metallics, courtesy of Guy’s pull. Walkman is already a shill for the company and is set for great income in what he believes will be a prosperous future. But he doesn’t realize that prosperity is not all about money and prestige. On one hand he’s forgivably young, but as the play reveals, he may be en route to becoming the worst kind of corporate man. 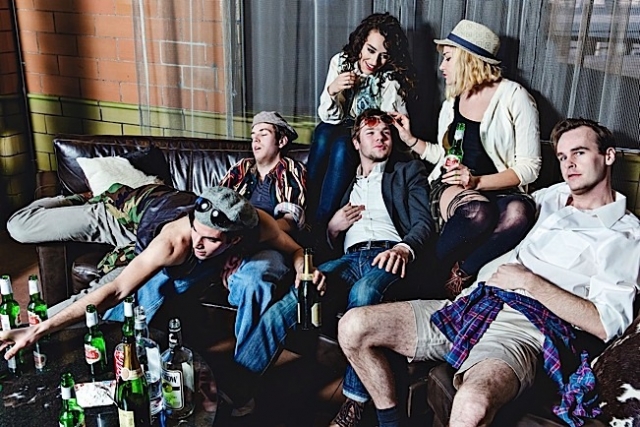 Murphy disturbingly embodies the Corporate Everyman in youth, and now that corporatism is actually much more prevalent in the US social structure than it was in the ’80s, the Corporate Everywoman. Murphy’s astute portrayal shows how a person can willfully and fearfully shut out all empathy to serve his/her fixated need to acquire and acquire and acquire. He’d do anything to please. Whatever scrap of rugged individualism he ever had has been chucked for the quest for approval so that he can move up the ladder. Capitalism is no longer a rational tool for building wealth but a kind of fanatical cult religion around which Guy’s dad is a high priest and the still adolescent Guy, his acolyte. Thence, Walkman, Guy’s acolyte.

The feminism of The Reagan Years is organically implicit, which is a clear sign of first-rate writing. It waves no flags, it simply emerges in a chillingly natural way. Jessie Scarborough-Ghent and Charlotte Calvert give splendid edge-of-your-seat performances as characters who counter these Peter Pans with a clear, mature value system.

Peter Morrow’s soundscape is nicely effective. My only quibble with the piece is that the script takes a bit long to find its feet. Ideally, we need to connect with the action asap. And Orlando takes a bit too long. Nonetheless, The Reagan Years is a thrilling play and a thrilling production.