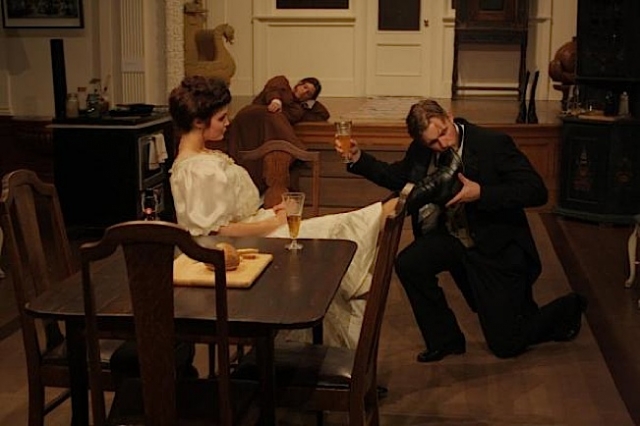 Swedish playwright August Strindberg’s Miss Julie (1888) remains a searing and complex examination of dominance and submission. Its story of an aristocratic young woman aroused by her father’s valet pits female class privilege against working class male lack of privilege. The classic still unnerves audiences on both the political right and left. Moreover, Christine, the female housekeeper character, reveals the class dynamics between women with brutal honesty.

All that said, what Jean, the valet, has going for him is that he is a young fit man. If he’s daring enough he has freedom of mobility. In the 19th century the world was vast and uncontrolled enough for a fit, bright man to strike out on his own with higher probability of financial success than a woman who did the same. For women of all classes, to lose your station in life, meant probable homelessness, drudgery, or sex work in a time when mobility for women lacked the potential that it did for men. But to be very clear, it could be a brutal life for men too.

For all its sins and injustice, the oligarchic class system provided a sense of security, albeit tyrannical and capricious much of the time. (In our time of much concern over the wide divisions between rich and poor, there is some speculation that western economies are going back to oligarchy.)

Theatre Coup d’Etat is presenting Miss Julie in the gorgeous and historic Turnblad Mansion ballroom at the American Swedish Institute. Peter Beard has directed three actors with specific and subtle motivations that penetrate the desire for power, sex, and self-preservation which Strindberg so brilliantly and painfully understands.

Miss Julie (Kelly Nelson) forces intimacy onto Jean (James Napoleon Stone). He doesn’t know whether he should resist or not. If he infuriates her, he insults her and is open to her privileged retaliation. If he gives in and they are caught, he will be disgraced and lose his job in the rigidly stratified Swedish society of the time. Losing your position as a staffer in a wealthy European home meant having no references, which could mean a life sentence of poverty.

The actors move the action at a splendidly brisk pace while masterfully maintaining the subtlety. The excellent Nelson fascinates with dominating class and sexual power which is stunningly undercut when she reveals how sheltered and naive she is to how the world operates. This is where Jean has the upper hand. He has a far more realistic and informed idea of the world at large.

James Napoleon Stone, in some of his best work so far, crackles with ambition straightjacketed into the gentlemanly persona that even a man who must work in the stables must emanate in aristocratic culture.

Brie Roland gives a touching performance as Christine. Contrary to generalizations that Strindberg was an outright misogynist, Roland and Beard have clearly read the role in its depth because Roland conveys a woman who is genuinely trapped in her function more than the others. Christine is not only called upon to do the chores of her job but she must also suffer the indignities that are thrust upon her by both Jean and Miss Julie.