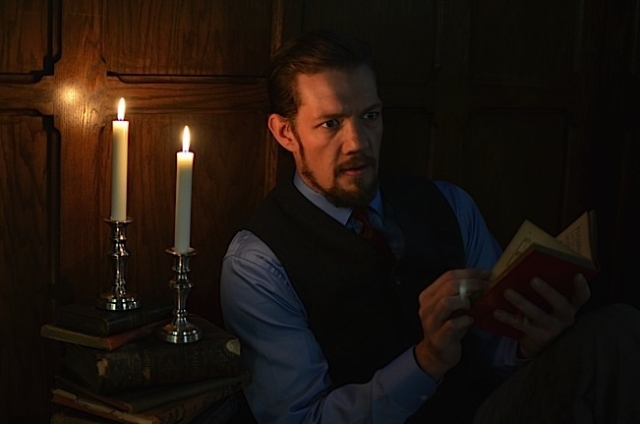 Christopher Marlowe is the quintessential renegade playwright. His mysterious early death at age 29 is legendary. He was a spy, a playwright, a lover of men, and for a time William Shakespeare’s rival. Some feel he would have equaled Shakespeare had he lived longer. Both were born in 1564.

Joseph Papke has directed Michael Ooms as Faustus for Classical Actors Ensemble. He has shared some thoughts on the play: “Subjectively, I feel the show is about free will and human nature. Faustus is a skeptic who questions the dogma of divinity. Though he’s repeatedly warned against it, he follows his independent nature, yields to temptation, and makes a choice to give his soul to Lucifer in exchange for knowledge and power. He then has to pay the price for that choice. The play is based on the older, religious morality play format, and, as much as I would love Marlowe to turn the form completely on its head and blatantly say something like, ‘there is no moral authority higher than the individual,’ or ‘there is no spiritual/supernatural world,’ he doesn’t. He was writing in a much more provincial and strait-laced society than ours. So the metaphysical rules are real and Faustus is punished. But he’s had fun. And we’ve had fun watching his unconventional life and anti-authoritarian actions. This is not a somber, ‘let’s keep the masses in line’ propaganda piece; this play is a subtle subversion, likely to make insightful audience members ask questions — and asking questions is the beginning of the end for any system of absolute authority. Without breaking any Elizabethan societal rules, Marlowe wrote an entertaining play that was a step forward for free thinking. Not that this is a ‘gay play,’ but in 1590, one could not simply state ‘I am a homosexual’ or ‘I am an atheist.’ However, a smart person with that agenda could begin dismantling the structures that make it impossible to state those truths.”