Disney’s Beauty and the Beast graces the Orpheum 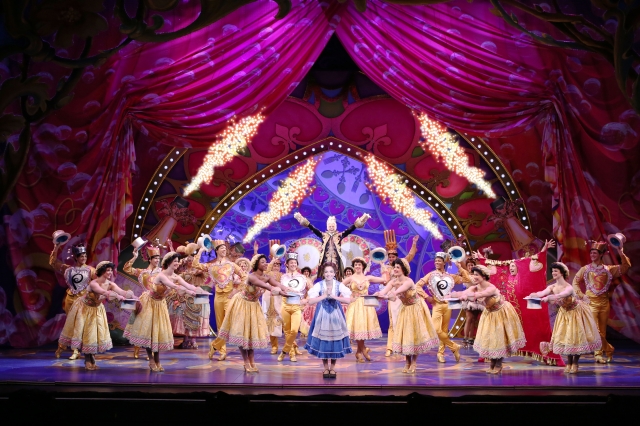 The cast of Beauty and the Beast perform "Be Our Guest." Photo by Joan Marcus.

The cast of Beauty and the Beast perform “Be Our Guest.” Photo by Joan Marcus.

Everyone knows the story. Everyone’s seen the movie. And, while everyone probably doesn’t share my fond memory of singing “Be Our Guest” on repeat when I was young, everyone knows and loves the music. Through October 21, Minnesotans can see Disney’s Beauty and the Beast live on stage at the Orpheum Theatre. With lyrics by legend Tim Rice, Beauty and the Beast brings life to the classic Disney story through opulent costuming, lavish sets, and an energetic cast.

Die-hard fans of this musical know what to expect when they take their seats for a performance of Beauty and the Beast, but this version, presented by NETworks, will definitely surprise. The use of puppets adds a pleasant new element to the production. Overall, this production seems to aim to be more kid-friendly, with many actors creating overly cartoonish characters to appeal to children. Sometimes, the buffoonish portrayals seemed too forced for a more mature audience. Also, the traditional scary moments of the musical (most notably the terrifying asylum director) are completely avoided. Though sincerity seemed to be lacking from some key moments of character revelation, most people would find this humor-based approach enjoyable. It’s a fun, happy night out at the theater that the whole family can enjoy.

I’ve seen several productions of Beauty and the Beast with different budgets and different levels of talent—from the Broadway version in New York City to a production done at The Rose (a children’s theater in Omaha) to a small, high school production in Nebraska. Each production, like the NETworks production, had its own strengths and weaknesses. However, the other productions I’ve seen were much more sincere, much more genuine, and much less focused on making the audience laugh at every possible moment. Through the NETworks production, I found myself missing some of the more tender moments, and I longed for a more emotionally diverse show.

Though I had a hard time overlooking the overabundance of slapstick humor and schticky characters, the production was completely saved by Hilary Maiberger’s portrayal of Belle. It had to have been one of the best performances of Belle I’ve ever seen. With a beautifully smooth and operatic voice, Maiberger was the saving grace of the performance. Her performance was youthful and sincere—the perfect qualities for Belle. Maiberger rightfully earned her spotlight, and her name will be one to look for in larger, future Broadway productions.

Overall, Beauty and the Beast will give viewers a great night out at the theater. People who have seen multiple productions of the musical may be disappointed, but the enthusiasm of the young cast should not be overlooked. This Broadway favorite will please kiddos and adults alike.

Disney’s Beauty and the Beast will be at the Orpheum in Minneapolis through October 21. For more information, visit www.hennepintheatretrust.org.