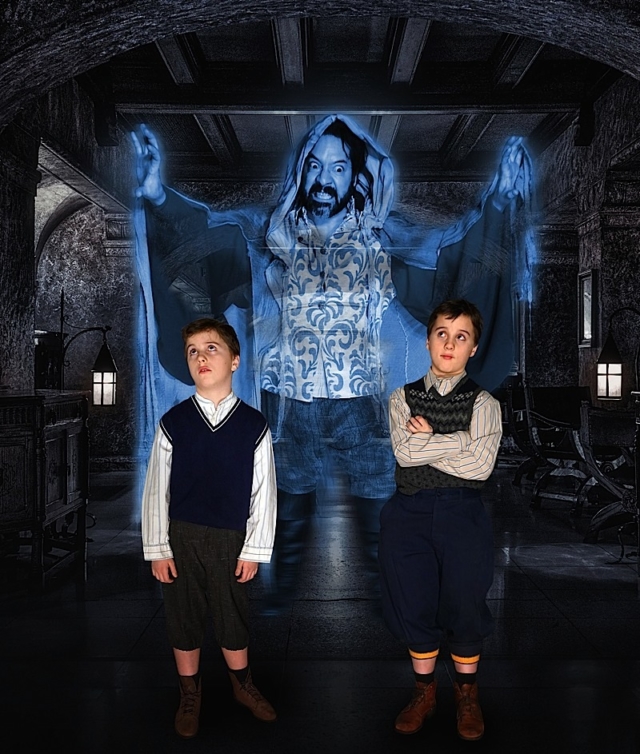 Gay legend Oscar Wilde is best known for his stage comedies, but his fiction was also notable. Marisha Chamberlain, recognizing the comedic theatrical potential of the book, adapted his humorous novella, The Canterville Ghost, for the stage. It is now in production at Theater in the Round. In Wildean style, it relates to the upper class and term “Chase” comes up, meaning a hunting hall or enclosed area for the wealthy.

Director Lynn Musgrave relates, “Poor Sir Simon, the Ghost (Mark L. Mattison), has longed for his final rest for three centuries. Initially frightened and angry, he’s forced at last to confront inhabitants of Canterville Chase he cannot intimidate: the fearless, buoyant, modern Americans who’ve purchased the property. At the time Wilde wrote the short story, British manor houses were being snapped up by Americans with money who had no real respect for centuries of tradition.”

She points out that the television series “Downton Abbey documented this phenomenon brilliantly. The manor life was changing and nothing—including traditional housekeepers like dear Mrs. Umney (Chrissy Sonek) or terrifying ghosts like Sir Simon—was going to stop it. Wilde actually seems to embrace this with his effervescent Otis family—the Americans. But we feel for both Sir Simon and Mrs. Umney despite their reluctance to change. Both tradition and progress have their place.”

The Canterville Ghost
Through Apr. 8
Theatre in the Round Players, 245 Cedar Ave., Minneapolis
612-333-3010
www.theatreintheround.org