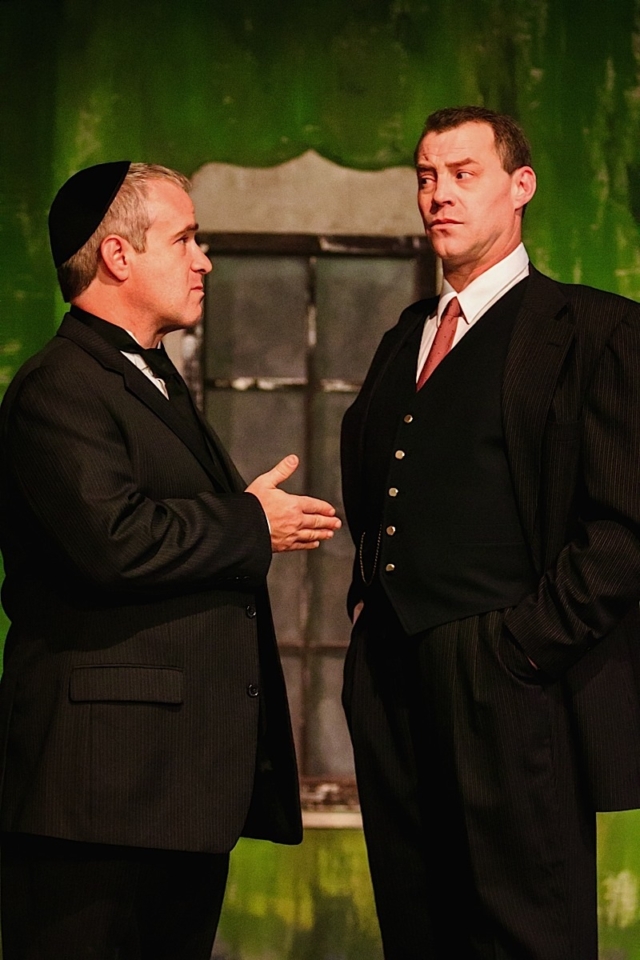 Classical Actors Ensemble is an accomplished producer of plays of the English Renaissance. That means they know how to create a fine Shakespeare production. CAE is currently offering one of the bard’s most famous comedies, The Merchant of Venice. That said, it is a comedy that has some very serious things to say. It also ranks among Shakespeare’s most controversial works because of its representation of the central Jewish character, Shylock, played by Joe Weiner. William Shakespeare lived from 1564 to 1616. Three centuries earlier in 1290 King Edward I expelled all Jews from England. The anti-Semitic currents of that edict were still felt in the 1590s when the play was written.

Director Kate Powers relates “we began our rehearsal process by asking ourselves, ‘Is this an anti-Semitic play or is it a play about anti-Semitism? Why should we tell this story?’ We met with Rabbi Glaser from Temple Israel and took very seriously our responsibility to weigh this as we worked. My experience with Shakespeare tells me over and over that he is exploring what it means to be human: he shows us humanity at its most thoughtful, powerful, and elevated, as well as humanity at its most fearful, petty, and craven. So while none of us can know with certainty what Shakespeare’s intent was, we have the text. And if one is fearless (or at least, feels the fear but does it anyway) about staging what is unacceptable, if one does not shy away from the ugliness, but gives it its full weight in production, the text reveals that the Christians in the play are filled with hatred, that Shylock may be, as well, but that his need/desire to assimilate is textually demonstrable, and that his decisions grow out of the thousand slights and daily acts of violence and erasure that he encounters at the hands of the majority community.”

Powers adds “I came to realize that exploring religious intolerance and blind hatred of an entire community is appallingly relevant at this cultural moment. I hope our production will generate some constructive conversation about how we can make more mindful choices in our community at this time.”