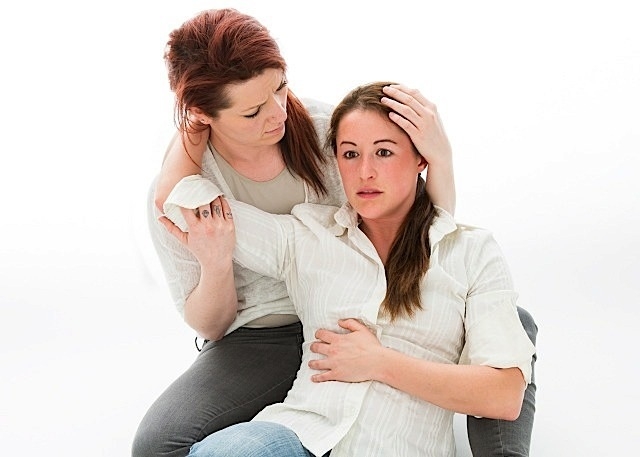 Theatre Unbound’s All-Female Hamlet is currently playing at the JSB Tek Box space at the Cowles Center. In playwright William Shakespeare’s time only males were allowed on stage. So males played all female roles.

For those who may feel they may not be able to understand Shakespeare, you most likely underestimate yourself. The action is fairly clear in how Hamlet is written and Theatre Unbound has made that work on the Tek Box stage. So it’s worth checking out. This is not to say that there isn’t mystery and psychological wonder beneath the lines. There is. But the plot is straightforward.

Director Leah Adcock-Starr describes the basic situation: “There is something rotten in the state of Denmark. An act of violence and significant loss has created a disruption in the natural order of the state on both a personal and political scale and now all touched by the  event -whether they realize it or not- must contend with that disruption. How does one deal with rot at the center of a soul? A mind? A family? A political state? These are the questions the play asks of its characters and its audience.”

The talented Kathryn Fumie plays the role of Hamlet. She shares “the task of Hamlet is relentless. All aspects of the play, the violence of the combat, the history of thousands of Hamlet productions in the past, finding the truth of the extreme circumstances in myself, and creating a physical and emotional road map to tell the story. I love it. It is consuming. And I am thankful for the opportunity.”