DIE/ASPORA SPINS FOR THE COMMUNITY 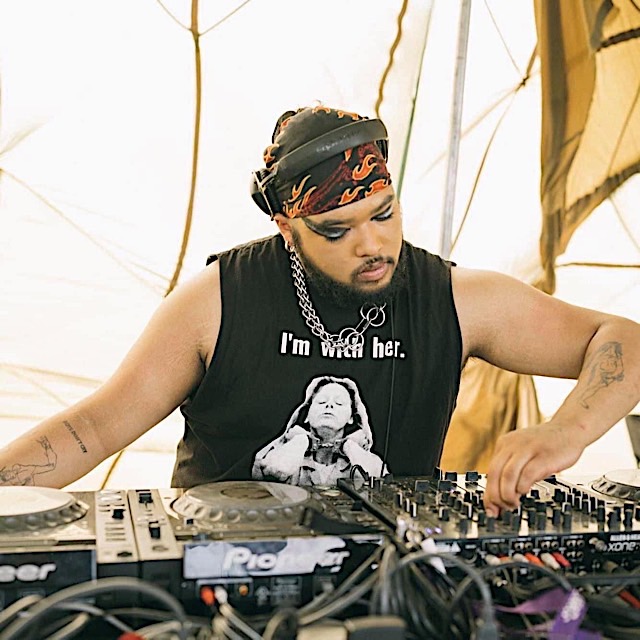 DIE/ASPORA’s interest in djing developed while attending DIY/underground parties with friends. They began djing in 2019 at a Dinkytown event. After this, D/A began attending events in the West Bank, leading to a fruitful relationship with Part Wolf (formerly Nomad World Pub).

A regular at Part Wolf, D/A became friends with the booking manager who, in turn, offered them a residency after hearing them spin.

D/A: “Getting booked doesn’t normally happen in a way that provides an open format, allowing you to do what you want. A lot of venues want dj’s to play a specific sound, or otherwise dictate how they want a night to play out. But at Part Wolf they were like, you can do whatever the hell you want.”

D/A’s parties at Part Wolf are now legendary, and lead to the venue being known as “The Gay Bar of the West Bank.”

D/A: “I put so many intentions into curating these parties. The limited amount of space allotted IPOC within gay venues wasn’t serving me. I was often told in a very back-handed manner, ‘If you don’t like it, then you should make your own space.’ So, I was like, ok. Well, sure. I’ll totally do that.”

And so, they did, launching a number of very successful parties in an historically straight, white environment.

D/A: “One of the things I loved the most was how these OG, Old-head, West-Bankers, that have been going to the bar for God knows how long, warmed up to me so quickly. Regardless of whether they had the vocabulary around queerness or gender-identity or sexuality in general or whether they had any sort of reference to who I was as a person, or what I was doing with these events, they recognized it as important. Even if they didn’t really get it, they supported me and they looked out for me to the end.”

The end came sooner than any expected due to the building that housed Part Wolf being sold (and eventually demolished).

However, D was able to throw one last party, documented in the PBS Special Art Is. The video reached 10K views in the first week.

Despite still grieving Part Wolf, DIE/ASPORA remains cemented into a leadership position, and has been very busy.

D/A: “I want to further extend where Part Wolf left off. That was a door opening. There are so many marginalized groups even within being queer or gay that are still fighting for visibility. That is always at the center of what I want to be. If there’s not space for me with the mainstream gay community, I’m assuming there’s not space for a lot of other people, too. That is what my parties represent. Come and take up as much space as you want. Dance wherever you want. Make it all about you. I spent a really good chunk of the first part of my life not making it about me. We, the marginalized, have a lot to say. We’re very important.”

“People know what to expect when I’m playing a set. They know wherever I’m djing, the spirit of that Part Wolf dancefloor is with me, and they can come and still take up space, knowing that it’s theirs just as much as it’s mine.

DIE/ASPORA is a resident dj with Dark Energy, Gothess, & Acme Collective in Minneapolis. They also travel out of state for dj opportunities.  By the end of the year, DIE/ASPORA wants to put out a 3 track EP. “It will be a little weird, and very DIE/ASPORA.”