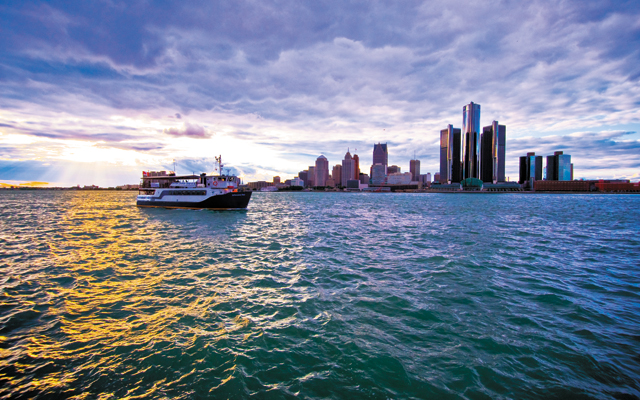 Yes, the city not long ago threatened with bankruptcy has emerged from those financial ashes with new muscle and a vibrant can-do spirit. Credited in no small part for reviving its fortunes is Dan Gilbert, CEO of Quicken, the lending institution, who bought 60—count ’em, 60—of the downtown’s threatened buildings to secure their future. And that future is shiny, with occupancy rates north of 90 percent today.

The Detroit Institute of Arts, once threatened with selling off its masterpieces to pay city bills, has launched a new display program that encourages viewers to climb into the painter’s brain to explore beyond “pretty.” Compare, for instance, two Madonna painters from the same century, one Italian, one Dutch, conveyed vastly different messages—one like photo-realism, one serene and static. Or, how about Baroque Art as Theater, with grand poses struck, spotlighted amid deep shadows? Or the socio-economic statement of Diego Rivera’s ta-da! murals of Detroit’s industry in the ’30s, a montage of muscular workers à la saints in the Sistine Chapel. 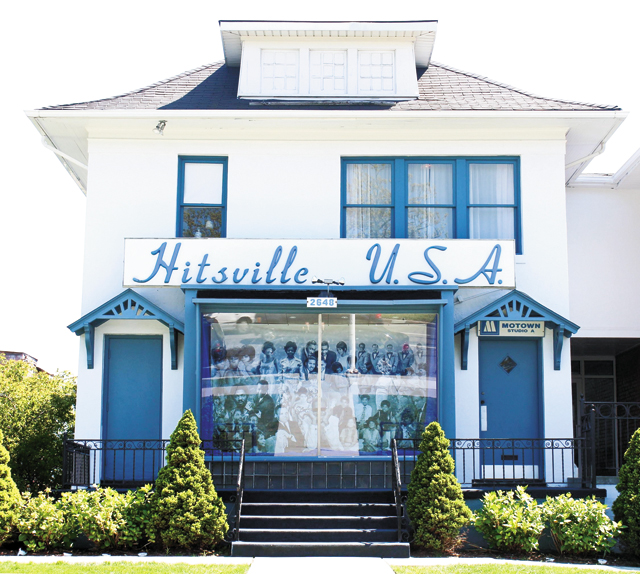 The DIA is one of three most-visited sites in the city, along with the Henry Ford Plant, birthplace of the Model T, and the birth of Detroit’s musical footprint, the Motown Museum. “You stepped into history!” screams our über-enthusiastic Motown guide. “Gonna get some dancin’ out?” It’s here where Berry Gordy served as messiah for Detroit’s young black musicians, shepherding them through instruction, not only in harmony and choreography (“The Temptations’ walk”), but also the social graces to grease their way to fame; seven years from start-up to a multi-million dollar business shipping to record stores (think artists like Aretha Franklin, Stevie Wonder, Marvin Gaye, and the list goes on).

The Museum of African American History, a block from the DIA, leads up to the Motown story. It traces the story from captivity and transport from Africa as visitors climb below-deck on a slave ship to encounter crowded, shackled “bodies,” then emerge onto America’s auction blocks (“Can I hear $25 for this woman and her baby?”) and plantation conditions—including uprisings—and Detroit’s own Underground Railway, headquartered in a church around the corner. It’s here that Martin Luther King, Jr. gave his first “I Have a Dream” speech. Detroit elected its first black mayor, ahead of the rest of the country, in 1974.

On the waterfront, cannons are aimed at Canada, across the water. There’s also a statue group of escaped slaves crossing the water to freedom. Today that riverwalk—home base of the city’s annual free jazz festival Labor Day weekend—leads past General Motors’ world headquarters, the towering Renaissance Center, to parks like Rivard Plaza, with Adirondack chairs, volleyball court, bike rental, and a merry-go-round featuring native steeds like frogs and herons. And beyond it, Corktown, once home of Irish immigrants escaping the potato famine, is emerging from its gritty roots as a hot new center of urban hip, flush with coffeehouses, bars, cafés like Slows Barbecue with its hours-long line, the new Two James Distillery (tours and samples), and vintage shops dotting the cute frame homes snapped up by millennials for less than the price of a condo. 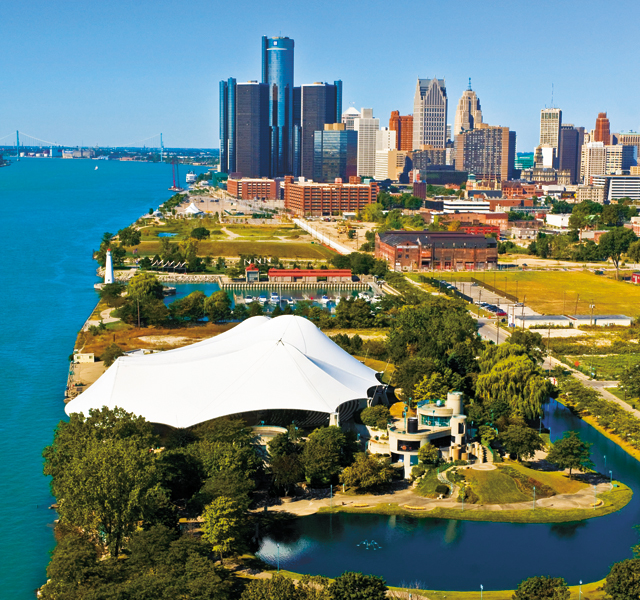 Midtown is another revival success, drawing the “Ed and Meds” from Wayne State University and Detroit’s premier hospital to snazzy new townhomes for this “yoga and yogurt” crowd of urbanites with shopping opportunities like City Bird and sister store, Nest (with “D” beeswax candles, Michigan-logo sunglasses and cookie cutters, onesies, and “Say Nice Things About Detroit” mugs). Across the street, Willys Detroit flaunts must-have casual duds, while nearby Shinola, in its world HQ, peddles its iconic bikes, leather goods, and watches (Bill Clinton reportedly purchased 15) and necessities like designer thumbtacks and handmade string. Close by, Motor City Brewery Works and Winery and Hopcat Pub hydrate trendsters.

New core-city condos are everywhere, but it’s downtown’s iconic architecture from the Golden Twenties that turns heads, from those pre-Depression movie palaces like the Fox and Fillmore ogling the stone tigers guarding Comerica Field and lions at Ford Field, to towers like the Guardian of 1929, designed in breathtaking Art Deco Aztec style, along with Tiffany clocks and jewel-bright mosaics at the elevator stands. Today, lounge in the former bank lobby, enjoying a coffee while you gape.

Good eats have returned, too, yours to enjoy at Roast, where superchef Michael Symon, snagged from Cleveland, serves mega-meat, starting with sweetbreads, pork belly, beef cheek pierogies, and pigs’ tails to chops, steaks, and the hit of the evening, short ribs (from a brontosaurus, by the looks of them). The Top of the Ponch surpasses its superb city view with a vanguard menu, ranging from smoked shellfish soup to stuffed sea urchin starters to lamb shanks with pierogi and parsnips, monkfish with crispy Brussels sprouts, asparagus, and turnip purée to a New York strip sided with chai-infused wild mushrooms and rutabaga clouds. 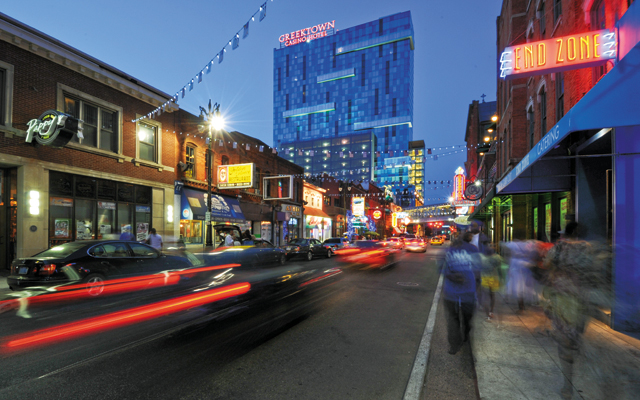 But I bet you’re hungry for a side of music with your eats. Then streak to the Majestic, a temple of burger-to-crab-cake-to-beet-salad fare aside a bowling alley with nightly jazz. Or Bert’s, a fixture of the revered Eastern Market (Tuesday and Saturday mornings), where wings and ribs are the stars, aside a performance stage. It’s where the stars of Motown the Musical (coming to Minneapolis in December) hang out after hours. And at Baker’s Keyboard Lounge, serving tunes and treats for 80 years, listen up while you gobble fried catfish or ribs with two sides. For info, www.visitdetroit.com.

Welcome to Ferndale, boasting “the largest per-capita gay population in the country,” according to Cassandra Varner. “There’s no other place like this!” Cass attests, as we tour the Detroit neighborhood where she serves as director of communications at Affirmations, its iconic GLBT community center. Anchoring its site on 9 Mile Road, the main drag, since 2007, it offers a rainbow of services, including advocacy, health and wellness, fitness and recreation, growth and development, and cultural/social programs: art gallery, café, film nights, cyber center, library, gym, teens’ game room, and more. Programs range from film nights to married men’s support group, transgender life support, seniors’ kaffee klatch, choir, yoga, lesbian card games night, and a softball league (www.goaffirmations.org).

There’s a young, urban vibe on the streets of neighboring Royal Oak, too, born of scads of gay-owned businesses, ranging from Pronto Café (oh, those cupcakes!) to Five15, a gift shop sponsoring weekend Drag Queen Bingo that sells out months in advance (www.FIVE15.net).

And talk about Pride! Motor City Pride is held downtown in June, while Ferndale’s own Pride is a June must, too. Black Pride, held in a city park, (“like a family reunion—totally fun!” says Cass) is the last weekend of July. For info, visit www.pridesource.com.