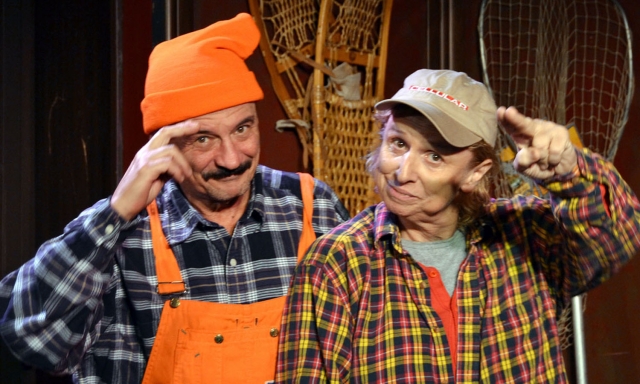 Before you assume that a musical about hunting is not for you, head down to the New Century Theatre and see Deer Camp—The Musical. Similar to “The Red Green Show,” Deer Camp takes a look at what really happens when the men go hunting Up North.

When four hunting buddies head up to the cabin with a huge supply of beer (and really nothing else), they’re in for the time of their lives…until it comes time to head home to the wives. With the threat of having “hunting week” canceled if they return home empty-handed, the men must figure out how to get a deer. Side-tracked by stories and beer, these hunters definitely have their work cut out for them—especially since they rarely leave the cabin.

Featuring Tony Papenfuss (Doogski) and John Voldstad (Digger), best known for their roles as “My Brother Darryl” and “My Other Brother Darryl” in the 80s CBS sitcom “Newhart,” Deer Camp is determined to make you double over with laughter. Rounding out the cast are Anthony Zadra (Moose) and Ross Young (Diesel). The performances are strong, with each actor adding a unique personality to the cabin (er, stage). Most notable is Zadra with his dopey expressions and perfectly-timed one-liners.

Expect manly humor (mostly about pesky wives, unfair expectations, beer, “melodious noises,” and even a bit about hunting) and things to get a little racy when the beer starts flowing. Don’t expect music worthy of  a Tony award; though solid, this musical is all about men having fun together, and the songs are witty and sweet.