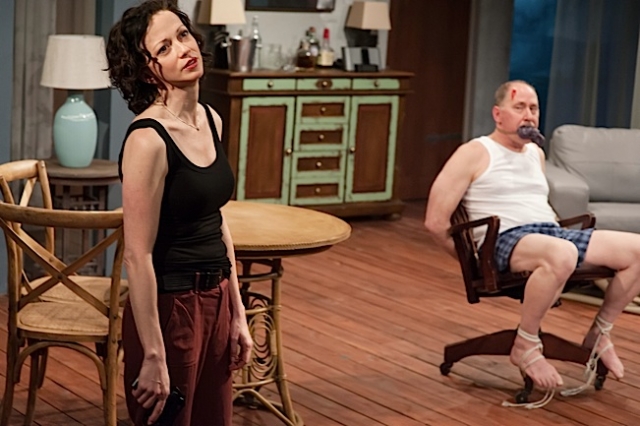 Ariel Dorfman’s 1990 drama, Death and the Maiden, examines the psychological aftermath of survivors of a defeated military state. The country is not named but the consensus has come to be that it is Chile in the 1970s and ’80s, which was ruled with systematized sadism by General Augusto Pinochet. The actions related during the course of the play closely resemble Pinochet’s rape room policies and “disappearance” of common citizens and vocal leftists and their relatives. Dorfman was exiled from Chile in 1973 because of his sympathies for assassinated President Salvador Allende.

Protagonist Paulina was a victim of torture and her attorney husband, Gerardo, is about to ascend to head the official national panel that will seek to air the previous regime’s record of torture and atrocity. Under the new, more humane government, the idea is that reconciliation and forgiveness will heal old wounds, or at least acknowledge that something horrendous was perpetrated, so that the country might move on.

It seems as if Fate comes to call when one night Gerardo’s vehicle suffers a flat tire and he is given a lift home by a doctor named Roberto Miranda. After dropping Gerardo off after Paulina has apparently gone to bed, Miranda departs but then doubles back to express his hopes that Gerardo’s upcoming panel duties will help to heal the nation’s wounds.

It’s the middle of the night but Gerardo sees nothing odd about the doctor’s return. After all, euphoria is in the air. The two men seem like bosom buds; for the first time in years it seems that citizens can become friendly, warm and generous with one another now that the old regime is gone. But Paulina abruptly enters the picture with steely resolve: she is absolutely certain that Miranda was the sadistic official who tortured her physically and sexually during the military state.

Torch and Gremlin Theatres are co-presenting Death and the Maiden at the Theatre Garage in a gripping production directed by David Mann. Stacia Rice is one of the Twin Cities’s most accomplished actresses and her Paulina is definitely among her best performances. The groundwork has been laid for this because Mann and his cast have scrupulously considered the nooks and crannies of Dorfman’s complex and unsettling script. 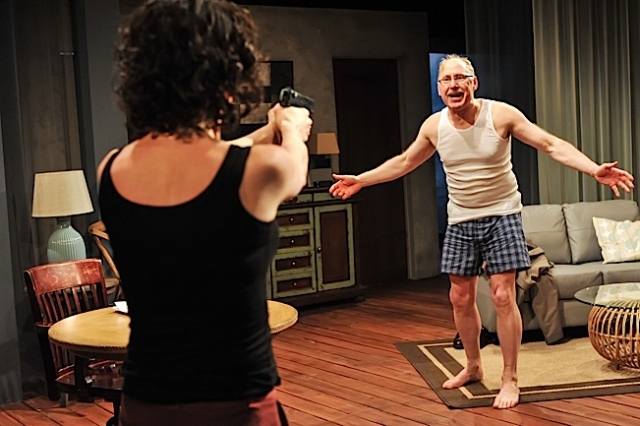 The play lifts off the runway when Paulina shifts quickly into vengeance mode with gun in her hand. Though Gerardo is appalled that she becomes so threatening and intractable in her conclusions, she holds emotional and erotic power over him despite the clear possibility that holding Miranda prisoner in their home could destroy the objective status crucial for his credibility on the reconciliation panel. Holding an accused man at gun point is a serious constitutional violation, no matter how awful you believe him to be. Beyond that she takes the judicial system into her own hands and insists on holding a three person kangaroo court wherein she’s the judge and jury, Miranda is the accused, and Gerardo is his attorney.

The magnetic Peter Hanson astutely and fluidly portrays Gerard as a man torn by ambition and sexuality. He reveals a man whose convictions and principles can be overpowered by emotions connected to libido. Hansen shows us the liberal who is rightly appalled at violence against women during the military era yet he is circumventing the judicial system. Innocent till proven guilty is the hallmark of a constitutional state. We question whether Gerardo was a good and mature enough choice for the panel in the first place.

From the empirical historical standpoint Pinochet’s minions were beyond notorious for their systematic rape sprees. This is not overstatement and Gerardo is quite right to be revolted by this. (One is reminded of General Eisenhower’s outrage when he first investigated the Nazi death camps.) There is no doubt that Paulina was tortured on an ongoing basis. She along with thousands of other women and girls deserve justice. But if word of her kangaroo court ever slipped out it could gravely jeopardize justice for countless other female victims as well as boys and men who were brutalized atrociously at Pinochet’s behest.

Moreover, there is a reasonable doubt that Miranda actually was her rapist/torturer and Mann always keeps us guessing with the interplay of the actors. 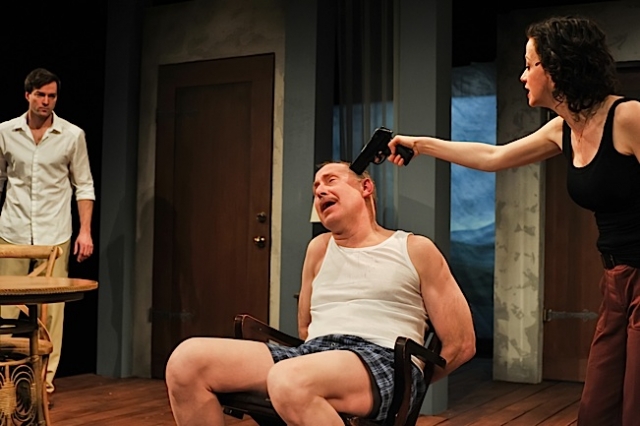 Actor Craig Johnson, who is bound and sometimes gagged throughout much of the production, never quite reveals Miranda’s complicity or non-complicity. Coincidence and what appears to be circumstantial evidence are titillatingly put forth by Dorfman. Gerardo is a fan of Franz Schubert’s String Quartet No. 14, Death and the Maiden, which was also the signature torture tune of Paulina’s rapist. It brings to mind how the Nazis loved classical music and high art. Various details that come up in Paulina and Gerardo’s illegal interrogation seem to match up uncannily with Paulina’s version of the story. It’s an ingenious turn by Johnson as one can never quite conclude whether he is guilty or a victim of vigilante justice. This seems to be Dorfman’s point.

On the other hand, in keeping Gerardo mesmerized so that he will continue his vital role in her inquisition, Paulina guilt trips him for cheating on her with another woman at a point earlier in their relationship. It’s one of the play’s unnerving undercurrents that systematized rape is put on the same level as infidelity.

Paulina has given over to the proverbial “by any means necessary” maxim in service of getting to the bottom of Pinochet’s Reign of Terror. Dorfman questions the notion that torture, which Gerardo and Paulina themselves are now actually engaging in, is a viable way of eliciting information.

Why I am so enthusiastic about Rice’s portrayal is that she resists turning Paulina into an easy martyr. She shows in Paulina a certainty that is on one hand inspiring and on the other, self-righteously treacherous. Rice conveys these with visceral force and power. In addition, she numinously captures the tragic inner problem of being unable to forgive – both Miranda for his high crimes and even Gerardo, for his lesser foibles. When one cannot forgive, one cannot ever let go. This may well be Dorfman’s most profound message and Rice lives into it with an agonizing sense of emotional truth. Wise audiences may ask themselves “there but for the grace of God go I.”

Those who know her body of work know that no one surpasses Rice in the understanding of Tennessee Williams’s very sexual female characters. She’s a true Williams master. Great grounding for this extraordinary Dorfman role.

A synchronistic thing happened about the time this production opened. Senator John McCain actually called a group of women on the Senate floor “low life scum” for daring to protest the presence of Henry Kissinger. (If you are unfamiliar with Kissinger’s record, then it’s easy enough to search engine why some would protest his presence on Capitol Hill.) Kissinger, President Richard Nixon, and economist Milton Friedman instigated a secret toppling of democratically elected Chilean President Salvador Allende in 1973 and installed Pinochet. The magisterial political journalist, Naomi Klein, considers this to be the first example of her Shock Doctrine theory, wherein a crisis or perceived crisis is used to shock a country’s masses so that austere economic measures married with authoritarianism are instituted in the hallowed name of the Free Market. Friedman’s approach was deemed suitable for military states but no one dared to spring it on elected democracies until Reaganomics and Thatcherism tested its waters in the 1980s.

So that I don’t seem partisan, Klein makes a troubling comparison of what Republican Nixonians did to what Democratic President Bill Clinton and again, Friedman, did by compelling Russian President Boris Yeltsen to dissolve parliament. A similar chain reaction to the Chilean social engineering experiment ensued in Russia. Free Market economics gave birth to billionaire oligarchs, violent gangs, and a sexual underground. The populace had to suffer harsh austerity measures that many reasonable reports say were as harsh as policies in the Soviet era. Again, democracies are not compatible with free market shock doctrine so the dissolving of Russia’s parliament set the stage.

Oddly enough, Death and the Maiden is a kind of landmark play in the subject of US foreign policy, though the US is never mentioned. When you see it you may be troubled by its subject matter but know it can be supplemented with some remarkable films such as Costa-Gavras’s Cannes-winner MIssing, the documentary The Trials of Henry Kissinger, Naomi Kein’s The Shock Doctrine: The Rise of Disaster Capitalism both in book in documentary form, and a 1980s Oscar-winner that looks at similar patterns in Argentina around the same time, La Historia Oficial (The Official Story). But see Death and the Maiden on stage first. It brings home the exponential damages of torture and rape.