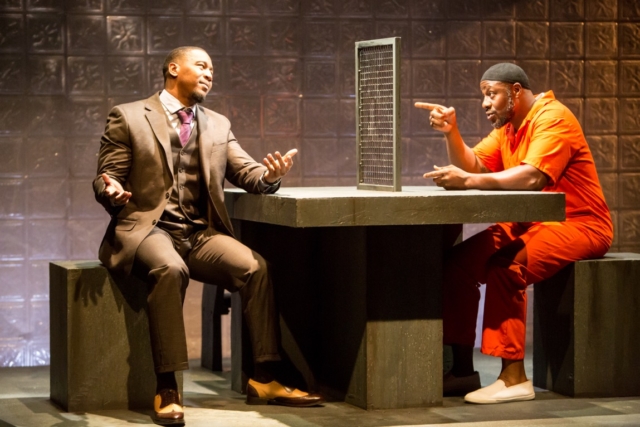 At the Jungle Theater you will see how two brothers reflect divisions within today’s African American community in Bars and Measures. It’s a perspective not seen much in corporate media nor in alternative media which is often known to falsely present minority and identity-based groups as a homogenized, united front. Eric (Darius Dotch) is a Christian and classical pianist brother and is living a promising career. The older Bilal (Ansa Akyea), a Muslim and a jazz stand-up bass player, has donated to a mosque that may be supportive of terrorism. Dotch and Akyea crackle in their roles and have created a visceral chemistry between themselves. They are boldly contrasted as the younger has shaped an artful life in a nice apartment while the older is incarcerated. Playwright Idris Goodwin has a sharp, savvy, and empathic ear for both sides and he reveals a view of African American life that tends to be obfuscated by fearful news stories about Muslims and terrorism. That said, he certainly doesn’t shy away from the gravity of terror issues.

Goodwin’s dialogue between the brothers is terrific but he introduces other unnecessary characters who fragment the play’s primary relationship, so potential dramatic power is lost. The reason for this seems to be to drive home Goodwin’s perception of qualified unfairness in the judicial system in how it treats Muslims. However, the effort comes off as hyperbolic rather than organically dramatic. Nonetheless, director Marion McClinton’s two lead actors make Bars and Measures an illuminating experience. Whatever the play’s problems may be, Goodwin breaks fascinating ground in African American drama.