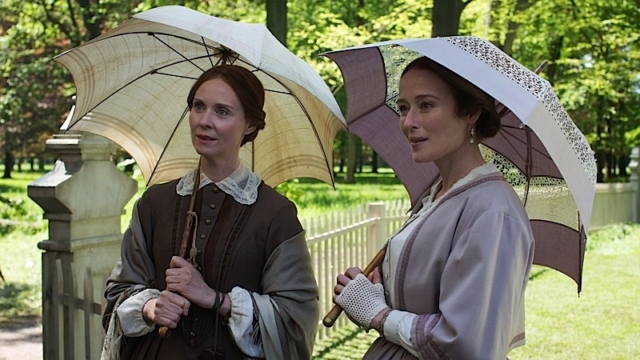 How perfectly suitable that a woman whose contemplative nature was essentially her signature, has been remembered in a sublimely contemplative film. Tragically, the work of Emily Dickinson (1830 to 1886) was virtually unknown till after her death, yet now she utterly looms and haunts us to this very day as perhaps the greatest American poet of the 19th century.

For those who know the play The Belle of Amherst by William Luce, be warned that Davies’s vision is far grimmer and truer. Cynthia Nixon’s lead performance is a profoundly deep study of the psyche of a woman who constantly restrained her rage toward what she felt were the callous and uncivil ways of the world. She sees the misogyny in some of the men closest to her, the entrapped roles of the women, and something that reads as fascinating now: the stiff but admirable social consciousness of some of her family members. Something many nowadays would misread as conservatism. Indeed, we are transported to a time and place.

Nixon plumbs the physical horrors of the Bright’s disease that ultimately killed Dickinson, as well as the woman’s bottomless sense of alienation, her insecurity about her features, and how she wrestled with God. Nixon magnetically connects with her fellow actors, impelling them all to superb period performances as well. What an actress! Her voiceovers of the great woman’s poetry are understated with an anguish so deep, they in themselves may make you want to weep.