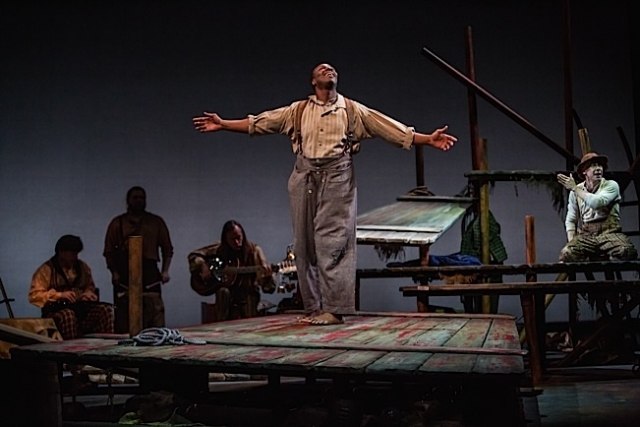 Director Greg Banks’s adaptation of Mark Twain’s Huckleberry Finn, is an inventive piece where three actors play multiple roles, male and female, and relate the story. This is a style Banks has effectively employed for other classic novel stage adaptations such as Robin Hood and Pinocchio. Victor Zupanc and Joe Cruz play evocative live folk-style music on stage.

Ansa Akyea plays Jim the runaway slave in a moving performance and it’s his predicament that fuels the narrative. 14-year-old Huck (Dean Holt) is at that phase where he hasn’t sorted what his values are socio-politically. Being a simple white boy he thinks that slavery is natural though his conscience is starting to make itself felt within. However, the fact that it’s illegal to harbor runaway slaves and that Jim is owned by a woman he respects, the Widow Douglas, make him struggle with what’s right and what’s wrong. It’s a powerful current that runs through the action packed story of a boy and a man on the run. 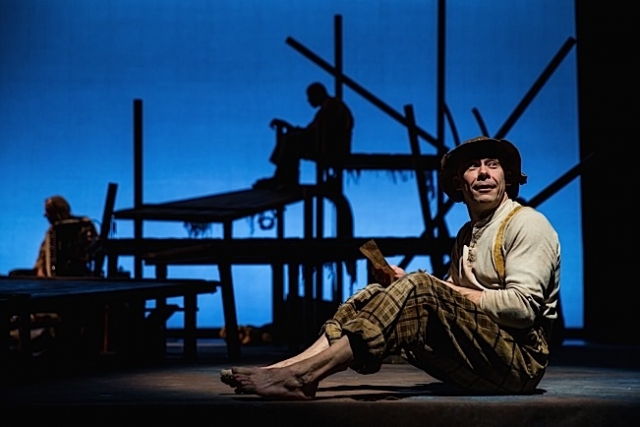 Holt, very much a grown man, brings spry youthfulness to Huck and a numinous sense of his inner struggle. Akyea plays his various roles well but being that they are all white roles and he is a black man, the piece loses potential dramatic intensity. Banks would have been wiser to cast others in those other parts so Tom and Huck could be more sharply focused on. Reed Sigmund is topnotch as Tom Sawyer and in other roles. Though the multiple character choice borders on confusion at times, the actors pull it off thanks to vivid variation in physical manifestations.