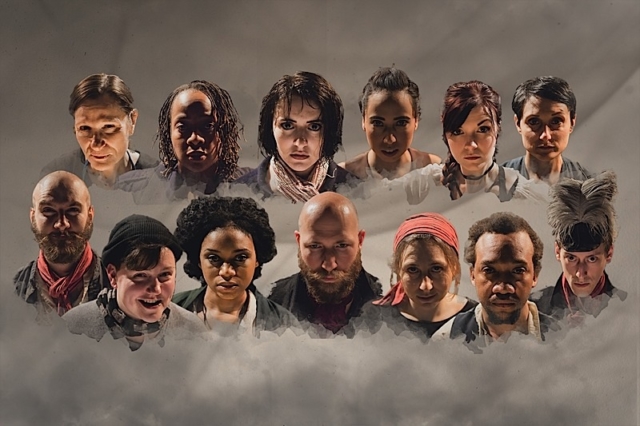 Theatre Coup d’Etat’s production of Moby Dick can be described as pure total theater. The performance site is not a standard stage, but a high ceiling space that seems suited for storage rather than actors and audience. The location is the Fallout Arts Initiative Co-op Studio 3 and allows us to imagine the story’s ship and land settings in a fittingly gritty way.

Director-playwright James Napoleon Stone has adapted Herman Melville’s landmark novel with a masterful grasp of written dramatic structure and continually inventive staging from start to finish. An ensemble of 13 actors, including some excellent female-to-male crossgender portrayals, elicit the textures of the 19th century maritime world, deeply felt male camaraderie, and the collective sense wherein a group can be swept into the personality cult of an obsessive leader. In this case it is Captain Ahab, played with luminescent power by Adam Scarpello. The actor rightly resists turning him into a villainous stereotype as he vengefully quests for the whale who once ate part of one of his legs at the knee.

The entire enthralling ensemble captures the essence of the great gay novelist’s story to a person. Sue Gerver’s bartender is perfectly hardbitten. Male bonding is movingly and sweetly realized by Craig James Hostetler and Meagan Kedrowski as shipmates Flask and Stubb. Kelly Nelson and Antonia Perez symbolize wonderfully stylized movement as the great killer whale himself and the ultimate outsider, Queequeg.

Eva Gemlo as protagonist Ishmael captures the unflagging probity of a young man brought up on noble principles and who, for the first time in his life, must see how they synch up with reality. She takes us on a journey through the proverbial “sentimental” or “moral education” of a young man of the time, the likes of which we find in classic literature. It’s a journey that we all should witness every so often in our reading and/or film and theatergoing.