Croatia: Queen of the Adriatic 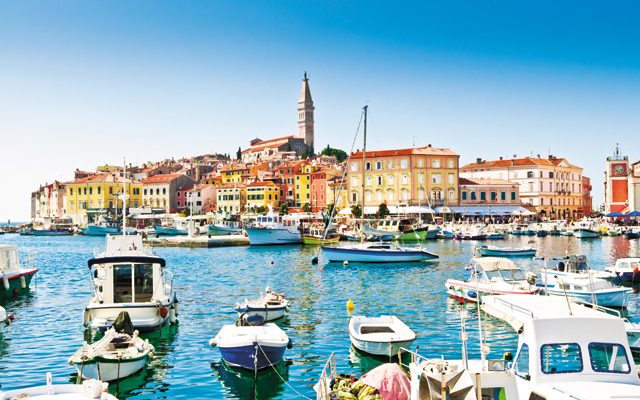 I Heart Croatia. Well, how can you fail to love a country that boasts a Museum of Broken Relationships in its capital city? (It sells Bad Memories Erasers in its gift shop.) Where, in that capital, Zagreb, a “green horseshoe” of voluptuous parkland undulating through the city center is papered with sunning citizens all day long. (Does no one punch a time clock here?) Where, upon ordering the local specialty—a blintz-like pastry—an über-starched waiter announces, “Madam, the stuckli is arriving!” A land that boasts the highest count of islands (all gorgeous) in the Mediterranean. And a Roman Emperor’s retirement home, bigger than a suburb. Top this off with primo wineries, seafood still wriggling, and friendly natives. Never mind that their language sounds, to this foreigner’s ear, like rocks in avalanche—they all speak English, too. And you yourself will soon master the word for ‘yes’—‘da’—because you’ll hear it incessantly, as in ‘da-da-da-da.’ Also ‘dovre’, which means ‘good’ or ‘super’. And Croatia is dovre to the max.

Zagreb’s main square—anchored by the usual Hero on a Horse—is the city’s epicenter, and who you are determines where you’ll congregate: upper crust around the statue, trendsters by the clock, intellectuals over at the bookstore. On one side, looms the grand cathedral dressed in lacy Gothic stone, and on the other, a restaurant row with acres of umbrella-topped tables. In between, and most lively on Saturday morning, the lure is the open-air market, offering sweet, sweet strawberries the size of peas, blueberries even smaller, radishes in brides’ bouquets, and pyramids of spuds and garlic. At the fish stalls, the seafood stares me down. I avoid the eel, bigger than a python, and head to the coffee shop, already bustling at 7 a.m.

We enjoyed some of that bounty later at Agave, dining on local treats like duck sauced with oranges and honey; stuffed beef with homemade dumplings; veal scallopini partnered with asparagus flan; and octopus, the kitchen’s pride. And more stuckli. For dessert, palantschinke—a crêpe folded over walnuts, with which we sipped a mellow merlot called Festiga from the sunny south. 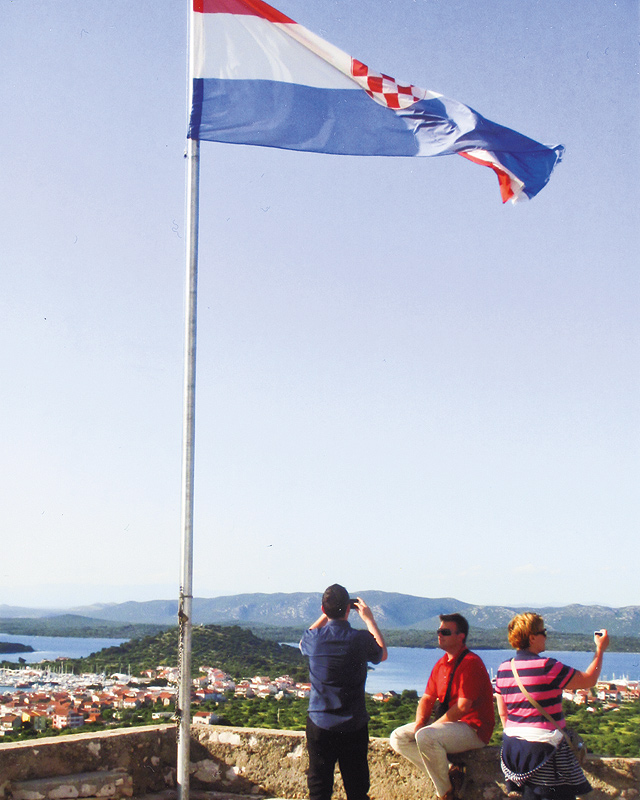 The Croatian flag flies over the fort at Hvar, an island in the Adriatic. Photo by Carla Waldemar

Next, we bolted south to the Adriatic coastal town of Sibonek, whose medieval stone passages hark back to 1066. Four fortresses oversee the harbor, today a life-is-easy promenade is patrolled by moms pushing strollers and couples slurping ice cream cones. Behind it rises the iconic cathedral of 1446, guarded by stern stone lions and overseen above the door by sadder-but-wiser Adam and Eve, trying to hide their privates. Kids slapping playing cards onto the marble pavement pay no need. Nor does a festive wedding party we admire as we lunch in its shadow at Vijecnica on squid ink risotto laced with scampi, octopus salad, and more (more, more!) walnut crêpes—all washed down with sips of blood-dark Plavac from the restaurant’s own wine production. Then a climb to the Monastery of St. Lawrence and its seventeenth-century walled medieval garden and, later, dinner alfresco far above the harbor at Tinel, where a whole sea bass festooned with a scramble of kale and potatoes stole the show, abetted by platters of prosciutto and grilled veggies. Then, of course, more pancakes.

Sunday came up sparkling, so we took to the sea for a glide through Kornati, a naval national park, and a maritime troll through the most dense archipelago in the Mediterranean—“nautical heaven,” our guide called it—formed (well, here’s my guess) when God pitched handfuls of mud into the gin-clear water. Anchor at a marina for a beer and a hike through the stones for a bird’s eye view of what has served as a fishermen’s haven since Roman times.

Then, Sunday lunch in Murter, known for its gastro scene, thanks to the monied yacht owners who lurk here (think Beyoncé, Bill Gates). No need for a menu at Boba—just a wave to the chef/patron and—“da-da-da-da”—a bounty of tuna: carpaccio, tartare, mixed with ricotta and pine nuts; plus monkfish liver pâté, then still-throbbing (well, almost) hunks of sea bass and branzino, downed with gulps of Bibich, a summer-friendly white wine, followed by slivovitz—firewater in flavors ranging from honey and lemon to blueberry and strawberry. And dessert, of course: baklava, panna cotta, white chocolate frozen soufflé, a chocolate semifreddo studded with almonds and (huh?) Parmesan. The vote: dovre. 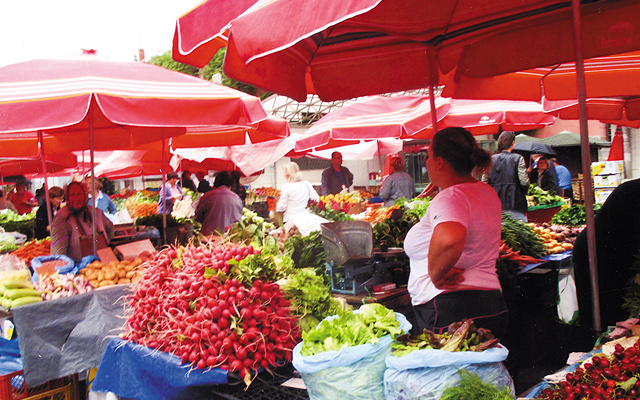 Today, another national park—Krka—where we patrol the boardwalk under a green canopy as waterfalls somersault on all sides. Frogs chortle, fish slither by. It’s like the Everglades, sans bugs and gators. Amid bobbing swans, we board a ferry to Skrada and lunch at Scala, where the choice is a fish platter (more is more: squid, octopus, langoustines, whole sardine-like critters) or meat platter (even more: sausages, pork chops, filets), served with that duo of kale and boiled potato that sets them off so well. Below a vista of red-tiled roofs, we overlook the luminous Adriatic as the sun provides the bling.

It’s a two-hour drive to Trogir, perhaps my fave among faves: already a settlement in 1000 B.C. Then the usual parade: Greeks, Romans, Turks, Venetians. Today, says Dino, our guide, “We are all Croatians. But here, we are also Dalmatians”—which translates to laid-back pleasure-lovers. And Trogir satisfies, honeycombed with marble-lined alleys leading to the main square, an architectural mishmash of Gothic, Baroque, Arabian and who-knows-what. And yes, above the door of the cathedral of 1240, another bare-naked Adam and Eve. In the former Roman Tribunal facing it, a quarter of a cappella singers—tenor to booming bass—resounds. Then we split for Split. 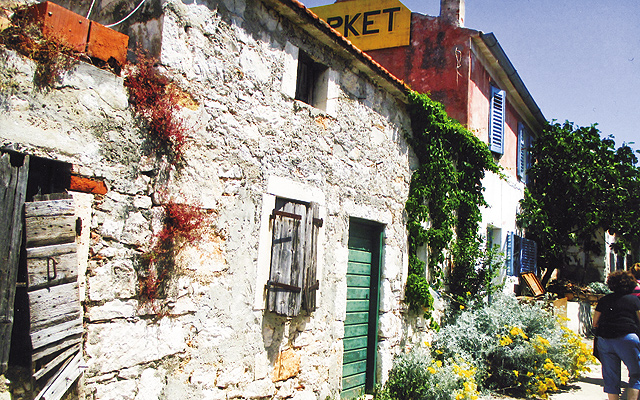 Fishing village an island of Split. Photo by Carla Waldemar

Sparkly Split boasts a trio of tourist lures: beaches lapped by the gentle Adriatic; excursion boats to entrancing islands; and that McMansion mentioned earlier, anchoring the shoreline where Roman Emperor Diocletian retired in ultra-splendor in 300 A.D. Today, within its walls, a city-within-a-city of 3,000 people percolates. Tour the Emperor’s labyrinth of chambers; ogle his mausoleum-turned-cathedral by Christians who came later; climb its bell tower for a grand vista; then visit the exquisite temple he dedicated to his in-law, Jupiter. Head to Peoples’ Square for a bit of people-watching while nursing a beer or coffee. Explore the web of passages disclosing boutiques of every ilk. It’s here in Split, by the way, that next season’s Game of Thrones is filmed, and where Ultrafest Europe, with 150,000 gays in exuberant attendance, will convene July 11-14.

Hop a ferry to a nearby island—Hvar’s the one favored by the glitterati ever since the founding of its capitol city by Greek sailors in the fourth century B.C. Fields of olives, grapes, and lavender lead us to its main town—also called Hvar—with cathedral, sunny esplanade, marina and, at a knee-punishing altitude above the square, a formidable fortress (cannons, dungeons) engineered by the Venetians, who ruled the show during the Renaissance.

Our choice for beach time was Split’s Le Méridien Lav: pool, casino, and ultra-lovely dining, too. After a feast of virtually every shellfish that populates the ocean, we dove into platters of local lamb three ways: luscious rack, spicy sausage spring roll, and tender brisket. And one last pancake before our early-morning flight, this time sweetened with marmalade. Dovre! For information, visit www.croatia.hr. 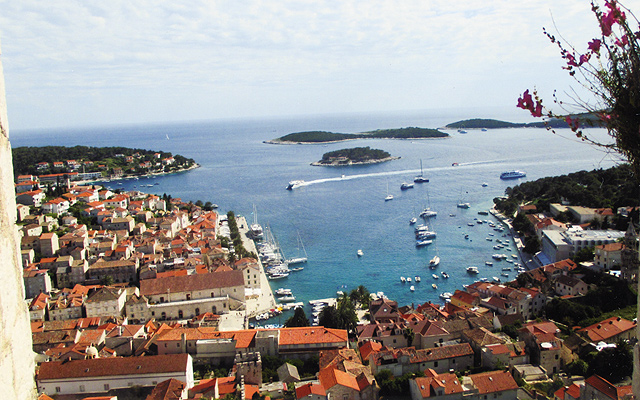 For gay clubs and saunas (mostly in Zagreb):  www.friendlycroatia.com

For info on Ultrafest: www.ultraeurope.com.