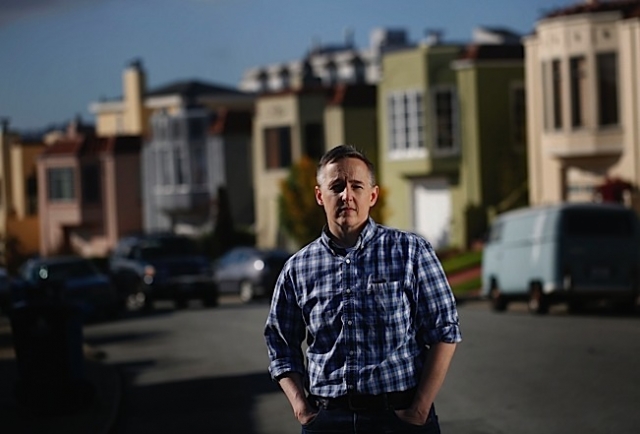 Lesbian filmmaker Jenni Olson’s masterful and ephemeral The Royal Road is an homage to Old Hollywood and a rejection of the mythologizing of Western and American Exceptionalism. These two different ideas run concurrently like two autos on an interstate highway. In fact, much of the film is photographed with landscapes and buildings found on or near the highway system from Los Angeles to San Francisco. This was once part of El Camino Real (The Royal Road) which connected central Mexico to northern California centuries ago when the Spanish ruled over all that territory.

You won’t see people through the beguiling lens of cinematographer Sophie Constantinou but you will see empty streets, automobiles, and some of the missions that El Camino Real was originally made to connect. San Franciscan Olson has two narratives that bind the film: one of an unrequited love she feels magnetized to in Los Angeles. The other is a corrective historical account of California.

Through voiceover narration that feels hauntingly and beautifully similar to the spare prose of the exquisite Joan Didion, Olson vulnerably recounts her obsession with an unattainable woman and is up front about what she calls “crazy” women. She relates to imperfect men portrayed by William Holden in Billy Wilder’s Sunset Boulevard and Jimmy Stewart in Alfred Hitchcock’s Vertigo. Aside from having great taste in film, she brings insight to how film has shaped most people’s monogamous romantic love, no matter what their sexual orientation is. We may not admit it, but most of us can relate first hand to Olson’s obsession.

Of course, many will charge her as a prisoner of nostalgia, but she civilly refutes that. She respectfully plays audio from Tony Kushner citing Bertolt Brecht’s absolutist denunciation of nostalgia as a backward impulse. But she has her own equally legitimate idea that nostalgia can be an empowering thing and The Royal Road inquires into that. Though it’s not her intention, it’s refreshing to hear someone questioning the sanctimonious Kushner.

For those not brought up in the Southwest, much of the historical segments may seem unfamiliar. Olson addresses the Spanish-Catholic conquest of Mexico and what is now the southwestern US. She reminds us that the missions were built for imperialistic intentions to forcefully supplant Native American spiritualities and belief systems with Christianity. The importance of 18th century friar Junipero Serra as a chief instrument of that is made vividly clear.

Moreover, Olson goes into fascinating historical detail that reminds us that the Mexican-American War of the 1840s spearheaded by President James Polk was highly controversial and that a man named Abraham Lincoln and one named Ulysses S. Grant were vehemently against it. As someone who grew up in the Southwest, the information wasn’t new to me, but it was great to hear it again and to consider how the military-political behaviors of that time mirror, in some ways, the dynamics of our Post-9/11 era. As with anything processed earlier in life, it is often illuminating to re-encounter it via your older self.

When so many GLBTQ people seem unable to reflect on anything beyond identity and the suffocating categorical (ab)use of language that too often goes along with it, Olson is nothing short of heroic in my eyes, as someone who has a universal apprehension but still has an unmistakably lesbian voice. The Royal Road, once viewers ease into its Zen-like hypnotic power, is a film that can relate to a wide swathe of humanity, not just the GLBTQ. That said, the GLBTQ community should be proud. And she hails from Minnesota!