“Crazyface” is Macabre and Transgressive 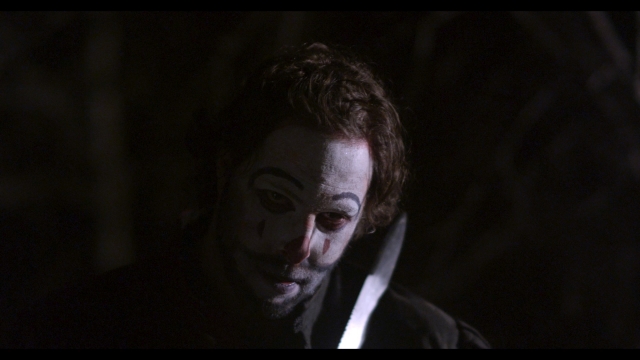 Demonic forces converge in Clive Barker’s epic satirical play, Crazyface, now in a bold production by Shadow Horse Theatre at Nimbus Theatre. The title role character is a trickster whose own relatives reject him for not aligning with parochial rustic prejudices. Feral and guileless are words to describe Andy Schnabel’s terrific title role performance. He’s like a figure out of Bertolt Brecht who roams a violence-torn Europe with a clownish persona as his shield. Carolyn Bloomberg’s make up creates a ghoulish effect.

Director Paul von Stoetzel’s cast plays the numerous scenes with clear apprehension, never flinching from the script’s transgressive demands. A Spanish King urinates on his androgynous attendant. Offstage a hog is castrated by a man who thinks he is castrating his brother. A woman with a criminal past becomes a Pope.

Crazyface’s murderous brother, Lenny (a forcefully primal Matthew Kelly) is manipulated by Mengo, a corrupt nobleman rendered with chilling charisma by Matt Saxe. Earl Milton is eerie ominous as LaMota, his assistant. Von Stoetzel has palpably re-imagined the intersection of  the nobility’s monopolistic greed, the power of church doctrine over the masses, and how the peasantry maintained a superstitious mentality borne of pre-Christian cultishness.
Two recurring trios weave themselves throughout: Derek Dirlam, Corey Boe and Joel Raney are comical as international spies. Billie Jo Konze, Ilana Kapra, and Audrey Callerstrom are fluidly dreamlike as figures who inject themselves into the action. Barker warns that those angelic figures that are supposed to watch over us do not always act in our best interest. A sensuous Derek Meyer is also fluid as Crazyface’s seeming alterego and takes us off guard when he snaps into a moment reminiscent of Alex the stud thug in A Clockwork Orange. The lyrical movement found throughout the piece has been directed by Ware Carlton-Ford.
Von Stoetzel has achieved solid results with his macabre aesthetic in stage productions such as one of Shakespeare’s grisly Titus Andronicus and his unsettling film,SNUFF: a documentary about killing on camera. With Crazyface he has clearly made a growth spurt. His distinctive aesthetic is deifinitely all there but he has fine tuned and sensitized his character work. Angela Walberg compels in a ritualistic scene that could be read as Satanic ritual. Fawn Wilderson-Legros is touching as Crazyface’s mother. Every single performance adheres to the ironic vision of Barker to a person.
Ian Knodel’s lighting, Sean McArdle’s special effects, Christopher J. Mogel’s sound design, and Theresa Akers’s spare set are cryptically effective. Costume designer Barb Portinga and her assistant Jade Kussow relish the grotesque, the carnivaleque, ritualistic Catholicism, and the Tarot.
Crazyface
Through July 26
Nimbus Theatre, 1517 Central Av. NE, Mpls.
www.shadowhorsetheatre.com