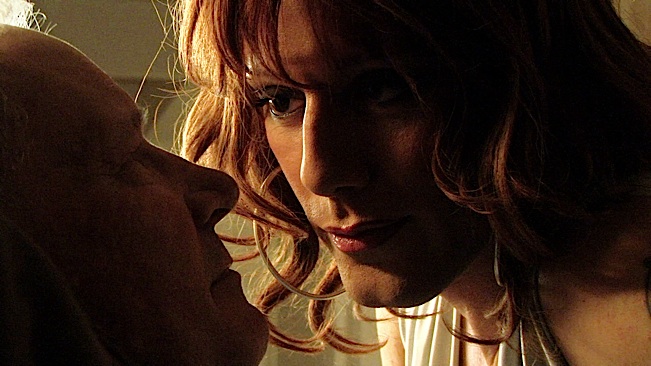 Gary Chason as Tom and Paul Soileau as Aliya.

Director Kyle Henry brings us a beguiling set of four sex tales reflecting four remarkably varied sexual experiences. The films’ four segments will trigger judgements by even the very open-minded, which is one of the many good reasons it needs to be seen. Henry and screenwriters Jessica Hedrick and Carlos Trevino go far beyond simply shocking the viewer. They take what is shocking as their vantage point and then penetrate the substance underneath. 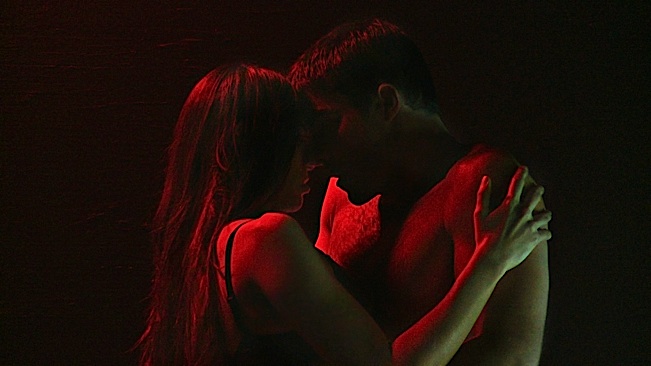 Atticus Rowe as Kai and Danielle Rene as Lily.

In the Austin, Texas tale, a heterosexual couple at odds with their cramped living conditions and lacking in clarity about whether or not to have a child, have a very serious argument. You may think they are finished. But they seem to actually bend time when they unpredictably enter a adult movie arcade primarily patronized by men seeking men. Here, a cat and mouse fantasy ensues that astounds with the rejuvenating power of sexual fantasy. Danielle Rene, who looks like a young Joan Didion, and movie-star handsome Atticus Rowe give penetrating, soul-baring performances. Yes, you can be beautiful and talented. 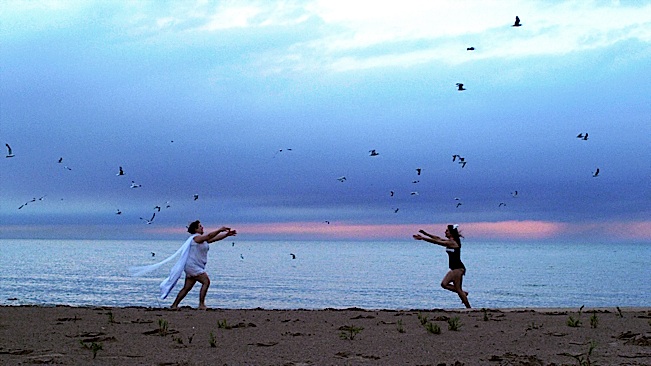 Sara Sevigny as Gail and Amy Jean Johnson as Marcy.

The Skokie, Illinois segment has Gail (Sara Sevigny), a woman with deep-seated unworthiness issues, dog-sitting for Marcy (Amy Jean Johnson), a fellow female church choir member she is passionately, secretly in love with. Marcy is straight, happily married, loves Jesus and her handsome, likable hubby, and just thinks the platonic world of Gail.

Hence, what unfolds is Gail’s erotic relationship with the dog. Now obviously, many of you reading this feel you stomach turning. Understood. But the film is not very graphic or explicit. It’s suggestive and implicit though the desire is clearly bestial. So why even show or event think about this? Good question. And here’s what I take from it and why I think the Skokie section is seriously significant: if Gail has come to inner terms that she can never have Marcy, does she find a romantic surrogate or substitute in the dog belonging to the human woman she actually loves? Have we as a society made it so impossible for people of any orientation to speak openly about who they want to love or at least who they desire, so that they must resort to mute animals? To be honest, society is congealed by adults who spend their time involuntarily, semivoluntarily, and voluntarily putting up barriers against others. Society is also set up so that the physically beautiful and wealthy have access to sex. For others it can be seriously, if not profoundly, problematic, as Fourplay’s most moving sequence, the tale from San Francisco portrays. 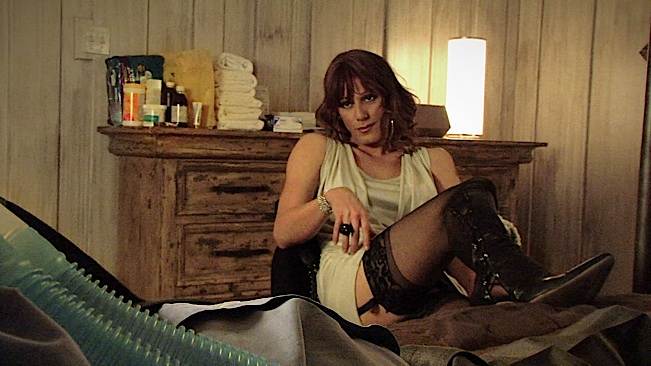 In the Frisco sequence a crossdresser who presents as female is hired by the wife (Cyndi Williams) of a quadripelegic man (Gary Chason) hooked up to various machines. The wife has graciously seen to it that her husband’s sex fantasy with a crossdresser is made tangible. Enter Aliya played by the magnetic Paul Soileau Christeene. (To my mind, the wife’s allowance of this takes moral courage. It is not immoral.) The wife makes it clear that her husband is straight and I believe her as does the ethical sex worker Aliya. When she enters, there he is in his bed, all hooked up, and so she must create erotic magic in the midst of such anti-sensual technology. And she does. They create a beautiful rapport that must be seen. It brings to mind last year’s sexual film masterpiece, The Sessions. Williams and Chason are perfection. Christeene is pure enchantment. 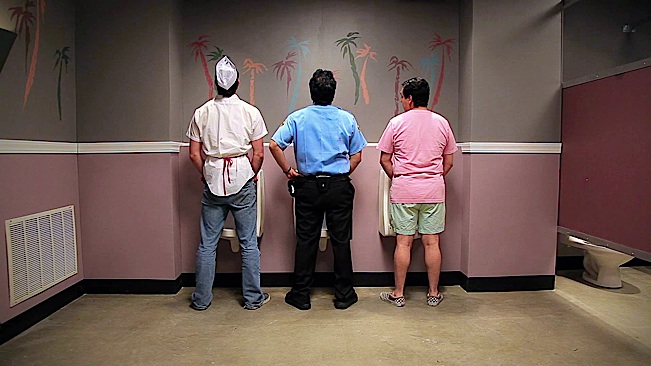 Fourplay’s most delightful and uplifting piece is also its most surreal, heretical, and homoerotic. Set in a cruisy men’s room in Tampa and seen through the eyes of the darling Jose Villarreal as Luis, various men of different body types, income, and backgrounds, lay aside their differences and enjoy each other’s pelvic regions. Office worker, weathered biker type, soldier, nerd, all come together in the democratizing way that only pure Dionysian caution-to-the-wind can create. Masculine macho armor is checked at the rest room door and men’s true personalities are brought forth. So much for the notion that sex is shallow. In fact, sex releases the primal truths of the subconscious and collective consciousness as this film reveals so splendidly. As the scene gets more surreal, in come crossdressers, an Israeli connecting with a Palestinian, and Hitler experiencing anal sex among others. This wildy homoerotic and adventurous scene culminates in Luis’s profoundly numinous spiritual revelation which I will not describe here. Be warned: it will seem heretical to some, though it actually raises speculation about one of the primary religious concepts held throughout the world.