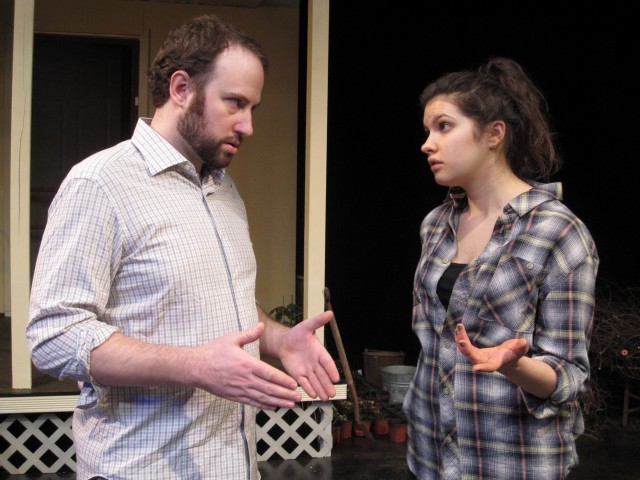 Playwright Christina Ham poses an ethical dilemma near the beginning of her cautionary new drama, Crash Test Dummies. Grace (Amanda Whisner), wife of protagonist, Cooper (Ryan Lindberg), has just fled from a hospital where she works in a position of responsibility because a riot has ensued. After having left her patients behind, she returns to her father-in-law’s home where she has been living for the past year with Cooper and their teenaged daughter, Fleur (Celeste Busa). Cooper is disgusted that she would leave the patients behind, helpless and vulnerable obviously, to fend for themselves. Indeed, most people would likely react the same way as the husband.

Cooper seems to have room to judge. He prides himself on having stood up to corporate machinations of the auto company from which he was fired as a systems engineer. He dared to whistleblow about the deadly potential of cars he was crash testing. For this he took a career hit and so has been out of work for well over a year, inert and dependent on his father, Emmett (Ed Jones). We are made to consider how unemployment can have a profound emotional effect on male identity.

Though the setting is said to be now in an American neighborhood, the riot may clue you in that this is not your typical family financial struggle in the post-Bush Great Recession. We learn quickly that in this neighborhood most of the homes have been foreclosed on and a predatory corporation is looking to pick the bones, so to speak, of  the very few left behind by ‘awarding’ them slim financial settlements; that is if they sign on the dotted line in time. Otherwise, the corporations will just take it. The old eminent domain trick in collusion with government. 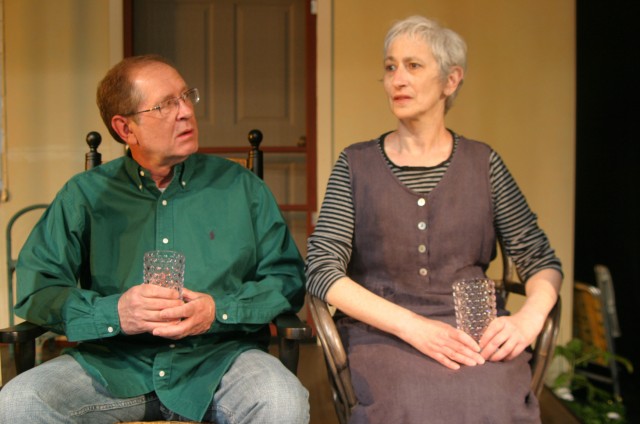 Ed Jones as Emmett and Miriam Must as his sister Mallory. Photo Credit: Liz Josheff.

Ham, unlike so many of the folks you hear on mainstream and right wing media, gets that the problem is not merely ‘the government’, nor can it simply be blamed on ‘corporate greed’ outright. Rather, it’s a matter of collusion between the two, wherein the corporations have bought out the government. If you listen lots of right wing radio as I do, you cannot help but be struck at how negative aspects of corporations are comparatively sparse compared to the avalanche of comments aired about supposedly negative aspects of ‘the government’. In right wing media implicity and in Ham’s play explicitly, we clearly see the new world of Citizens United being propped up by the US Supreme Court. So to this economic reality, Ham is frighteningly up to the moment.

When Cooper defies his retired dad to say no to the corporate predator’s raw deal, once again, the pull for many viewers, will be to say ‘Damned Straight Cooper! Be a man. Stand up for yourself and your family! The old man’s lost his nerve!’

However, shining lights of intrusive police helicopters, a dead black labrador in the front yard, and aimless gangs prone to rape and looting, have now become to be a part of the neighborhood’s life. Apparently, economics and society have dramatically, quickly deteriorated. It’s reminiscent of Anthony Burgess’s A Clockwork Orange or sections from Doris Lessing’s Shikasta. We are long past any reasonable possibility of common people having even a shred of power to combat corporate/government authoritarianism. To defy is to do yourself in essentially. 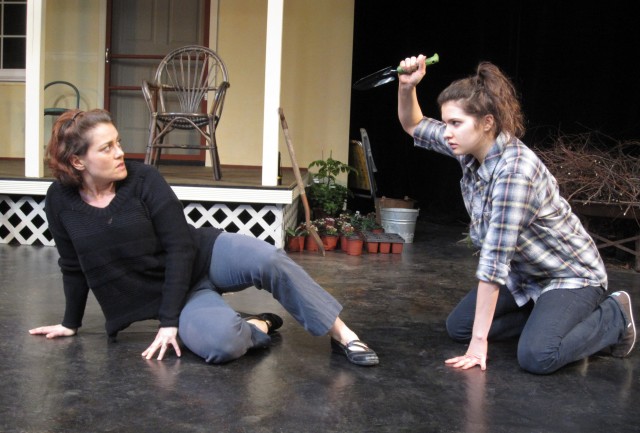 Where Crash Test Dummies shifts into its tragic dimension is when Cooper insists that they all stand their ground together and create a new Eden in the front yard. It’s a variation on the Chop Wood Carry Water fantasy of well-meaning hippies and of middle class conservatives who want to retire to the cabin thinking life will be happier and simpler. Unfortunately, even in the best of times such dreams are problematic, but in Crash Test Dummy time, they’re absurd.

Cooper’s obsession leads him to deceive his family in a way that disgusts more than Grace’s abandonment of her patients. (You’ll have to see the play if you want to know what that is.) As his grip on reality loosens, it’s reveals how rugged individualism can be perilously misapplied in this new world.

Neither Ham or director Steve Busa have chosen to turn this family into militia fringe types and that’s part of the power of this play and production. This is a truly average white working class family. There’s no stereotyping of Cooper as some white right wing nut job or just another disgruntled fired employee. Anyone can relate to him and-or his predicament.

It’s worth noting that Ham is a playwright of color. She is compassionate and sensitive to  what traditional men’s quandary when they feel helpless in saving their family against overwhelming odds. She gets what a tragic blow this can be to a man’s identity. Lindberg in turn manifests that identity injury and annihilation quite poignantly. His Cooper is a man sociologically and psychologically drowning by what the external socio-economic world has dealt him. It’s very difficult for one to judge him too harshly. He brings to mind the men of playwright Henrik Ibsen.

Grace is written as a tightly wound woman who lives at her wits’ end from start to finish. Ham has written the role at an extreme pitch, therefore, it’s quite demanding. Compare it to the role of the liberal wife in Yasmina Reza’s The God of Carnage. In that play’s terrific recent film version, Carnage, Jody Foster plays that extended pitch so masterfully. The same can be said of Whisner. She, Whisner, also brings a kind of weather-beaten physical beauty to the role. Like a fallen goddess.

Director Busa’s achievement is in illuminating how these characters seem to be one thing and yet become totally different than what we thought that thing was. He has his whole wonderful cast take us on that journey, not just the husband and wife. Jones’s Emmett seems like just another cantankerous old guy who refuses to make what seems like the ‘right choice’, but more complexity is revealed as he knows his options are extremely limited and not the bounty of options of the 20th century he grew up in. Celeste Busa rivets as a confused and naive teen, the type we have all known or perhaps have been. But awful circumstances occur which compel her to feel she must keep something secret, so the quality of what we feel for her shifts. She’s not just an irritable kid. Miriam Must brings subtle wisdom to the role of Mallory, Emmett’s sister, who apparently once was a part of the counterculture of a more progressive period of time now past. At first she seems callous toward her family members, but we discover she knows things some of the others don’t and like many wounded progressives, knows too well the painful reality of accepting realpolitik.

Crash Test Dummies casts a powerful spell, and for all its bleakness it’s not a downer. Though the design team of Liz Josheff, Wendy Smith, and Ron Albert support the depressed atmosphere effectively, which the play requires, it’s ultimately a cautionary work that calls us into heightened awareness about a deteriorating tendency in the world around us that needs to be countered.