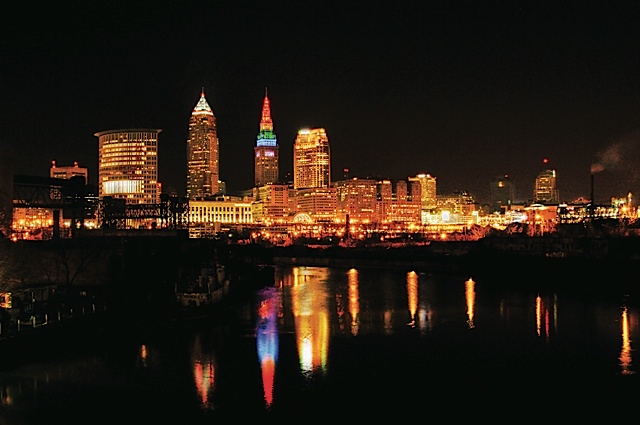 Cleveland is ready for its close-up. The brain drain is over. LeBron is back in center court. The Playhouse District boasts nine vibrant reinventions of those ultra-glam picture palaces of the Roaring Twenties. Scratch the jokes about the polluted/deserted Erie lakefront and check out its new skyscraper shoreline instead. Call it the Rust Belt Renaissance.

Classy new hotels — the Westin, The Metropolitan at the 9, and a Kimpton under construction — capture dynamic view of the lakefront, including the new, “green” Convention Center, the Science Center with hands-on exhibits and a new NASA adjunct, and the city’s most iconic draw, the Rock and Roll Hall of Fame. Let’s start our visit there.

Newsreel clips thundering that “Rock and roll leads to Satan’s trap” spotlight legendary superheroes, from Elvis and The Beatles to Lady Gaga, whose music, outfits, and instruments are yours to ogle. It unfolds the Cleveland story, too, as launched by D.J. Alan Freed, aka Mr. Rock & Roll.

Yoga at the Rock and Roll Hall of Fame and Museum. Photo courtesy of ThisisCleveland.com

You’re more into Beethoven than Chuck Berry? Head to elegant Severance Hall, where Bach’s B Minor Mass brought us to our feet. For live jazz, it’s the oh-so-cosmo Velvet Tango Room: oh sure, just anyone can grab a stool at the streetside bar, but you’ll need a password (secured by phone reservation) to pass through the bolted doors to the hidden “speakeasy” in the rear — and that’s where you’ll want to be, sipping a craft cocktail and listening to tunes on the grand piano while seated by the fireside on a swanky leather couch.

Cleveland’s second-most-popular site is even more off-center: the house where A Christmas Story was filmed in 1983 on a budget so miniscule that snowstorms were composed of dried potato flakes. Take home your very own “major award” in the form of the infamous leg lamp in the window.

Got art? Cleveland’s Museum of Art recently enhanced its beyond-awesome collection of Old Masters with a massive, $350 million expansion; yet admission still remains free, enabling you to get up-close and personal with its Rembrandts and Matisses, along with a ginormous metal catcher’s mitt and wooden baseball, courtesy of Claes Oldenburg. Don’t miss the culinary upgrade, either: Provenance, its café, boasts a tandoori oven, while its formal dining room proffers venison with juniper jus; heirloom tomato carpaccio; and an unequalled Ohio artisanal cheese selection. (There’s also a giant red rubber stamp by Claes in a downtown park, and in nearby Old Stone Church — where Lincoln’s coffin rested during his funeral cortege — those stained-glass windows are the real deal: actual Tiffany.) There’s more art in Luca, a lakeside ristorante featuring original Picassos and a Michelangelo sketch of a figure about to hit the ceiling of the Sistine Chapel. Really. 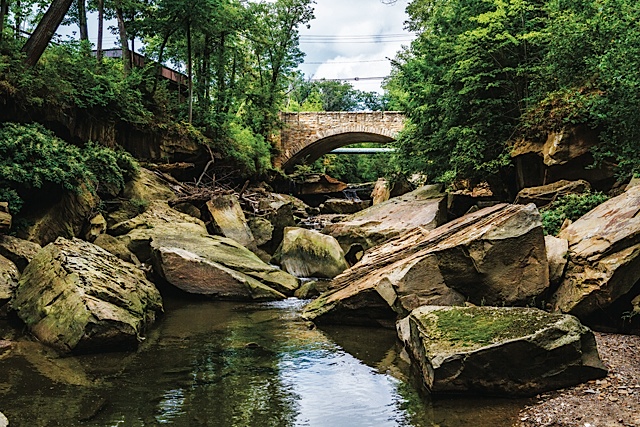 Maybe you crave not only Old Masters but living ones? Then scoot over to 78th Street Studios on a Third Friday. Three floors of a former greeting card factory are crammed with the city’s trendsters catching the latest works while chatting to artists in its 70 galleries (free wine, too).

Art of another sort entirely greets you at the Museum of Divine Statues, a labor of love, and devotion, by Lou McClung, who rescued the statuary of neighborhood Catholic churches that ceased operations. In fact, he uses a former church — stained glass windows, carillon — to display the treasures he’s rescued and painstakingly restored (in his other life, he fabricates cosmetics for TV anchors) from his home in the former parish house next door in the heart of Lakewood, a prime-time gayborhood.

While in the ’hood, pop into Flower Child, a vintage shop that offers the jewelry you know you want, retro shades, Bakelite radios, a Tweety Bird bank, and lifesize bust of Elvis. Next door, a crammed arcade called Big Fun Toy Store features old-time toys and board games. Then grab a booth at Happy Dog, where five bucks score you a hot dog with any, or all, of 50 gratis toppings. Stick around for the polka happy hour. 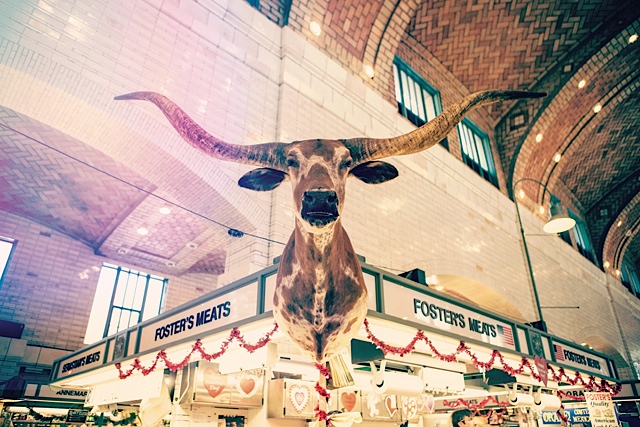 Cross the bridge to the neighborhood called Ohio City, home of early immigrants and, since 1912, boasting the West Side Market — largest indoor/outdoor market in the country with over 100 booths of what’s fresh and fine to eat in Cleveland: apples polished like Tiffany jewels, lettuce that could double as a bride’s bouquet, ten varieties of potatoes. Dealers like Angelo (“How long you been here?” “Forever.”) call out their wares like auctioneers: “I give you five for $5!” “I got oranges!” Meats, cheeses and pastries, too.

Wanna beer with that? Cross the street to Great Lakes Brewing Company, with bragging rights to a bullet hole in its elegant mahogany back bar, thanks to Eliot Ness, city safety director in 1936, who “tended to get rowdy,” the bartender told me while pouring my amber beer named in Eliot’s honor. 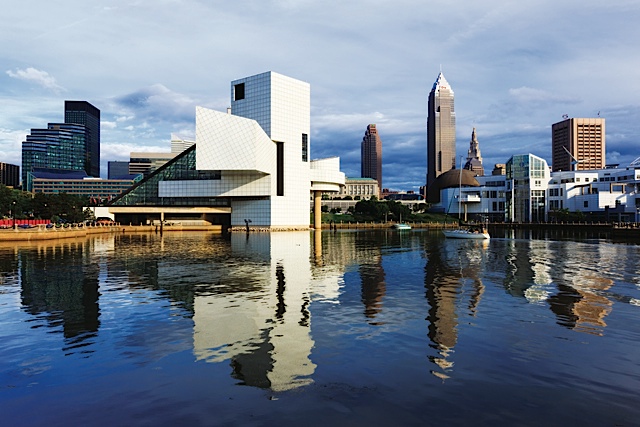 Eliot Ness was a police force fixture back in the day, and a visit to the Police Museum (in downtown’s Justice Center) documents “100 Years of Fighting Bad Guys,” including the local Mafia, the bootlegging Cleveland Syndicate, and the infamous Torso Murderer. (Ness burnt down Hobo Village “to deprive the butcher of potential victims,” explains one photo caption.) An old-time jail cell, confiscated weapons, a vintage motorcycle, and the first policewoman’s shoulder bag (compact and lipstick among her defenses) enrich the history.

Cleveland’s police force (and anybody else who’s in the know and mighty hungry) head for lunch at Sokolowski’s, a blue-collar cafeteria in an old-time Polish neighborhood aimed to vanquish any plans for dieting with supersized platters of stuffed cabbage, pierogi, and the like.

Then it’s off to the Federal Reserve Museum, housed in that downtown bank, where you might expect a dreary display of thrift techniques, but no: it’s an interactive game-show experience in learning what serves as money (A: Anything someone else wants, be it seashells or coconuts). Test your money slang (greenbacks, dough, dead presidents), how to detect counterfeit bills, the entrapment power of company scrip, and the wartime propaganda propelled by savings bonds posters. Finally, pose to get your photos snapped to print on a dollar bill. No need to spend it; this museum’s free. 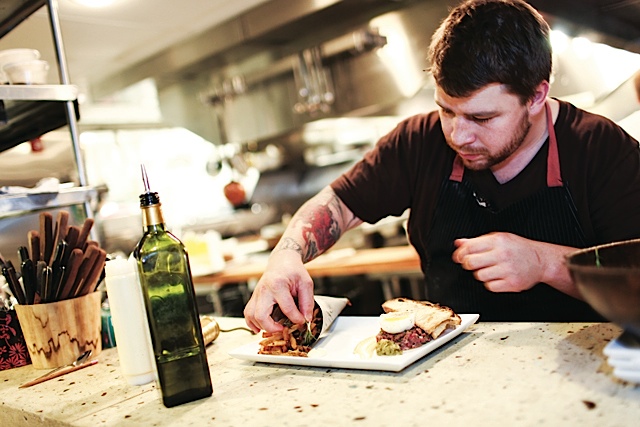 And it’s just a few steps from East Fourth Street, the entertainment district, where a seat at Lola is the most coveted in town. Across the road stands another locovore’s Eden, Greenhouse Tavern: heirloom tomato salad frilled with dill, dehydrated Nicoise olives, and local feta; Ohio sweet corn gnocchi with egg, fresno peppers, Parm and prosciutto; frites with fried egg and bacon, mozz curds and brown gravy.

Ready, set…go to www.positivelycleveland.com to plan your visit.