City of Lakes, City of Art 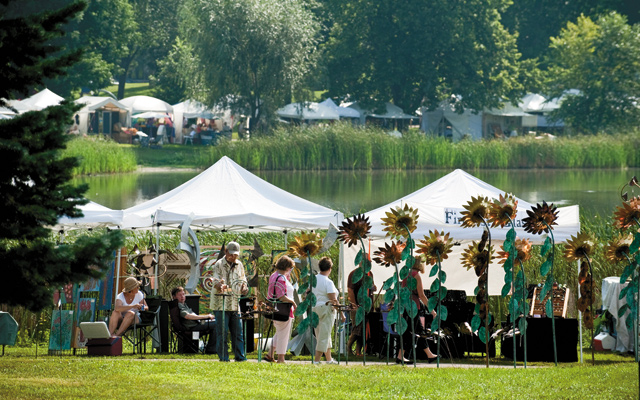 Alfred de Musset tells us that great artists have no country, but great artists will have a city during the first weekend in August: our beloved City of Lakes, Minneapolis.

The Uptown Art Fair will celebrate its 48th incarnation under the theme of “Art Meets Life.” The Fair manifests in its traditional locus, where Hennepin Avenue meets Lake Street, better known as Calhoun Square. This year’s commemorative artist is former Minnesota Vikings linebacker Matt Blair who knocks flat on its hindquarters the notion of art being just for sissies. “Photography and football have always been my passions,” Blair acknowledges. “I carry my camera everywhere I go to capture different viewpoints and perspectives we might not notice with our own eyes.” Encouraging future artists is also part of the Uptown Art Fair’s raison d’être. The Fair will feature “Tomorrow’s Stars Youth Art Fair,” uniting 40 creators between the ages of 8 and 18. Perhaps most inspiring is an expo that focuses on older adults: it will feature exhibits, interactive demonstrations by professional artists, and raffles for classes, artwork and more. In this way, life meets art just as surely as art meets life. http://www.uptownartfair.com/

The Powderhorn Art Fair will observe its 20th anniversary this year. This landmark has inspired a collection of Fair-oriented memories, which will be tent-poled by two longtime exhibitors: jeweler Mimi Spencer and Chinese brush painter Charlotte Fung Miller. Powderhorn Art Fair features precisely 184 national and local artists of varied disciplines. Some of these artists are not just local, but thoroughly local: a space has been set aside for group exhibitors from the Powderhorn area specifically. Art of a more performance-oriented stripe will be provided by Open Eye Figure Theatre and Articulture. For people who prefer art absorbed through the eardrums, acoustic music will be furnished by Dan Rein (who specializes in Iranian stringed instruments), Tom Klein (who labors lovingly over Irish bagpipes), and the group Ensemble Limousine (which describes its sound as an eclectic French mix). The Fair, naturally, takes place in the bucolic, 66-acre Park from which it takes its name. http://powderhornartfair.org/

Within the shadow of the Basilica of Saint Mary, the Loring Park Art Festival will commemorate its 12th birthday in 2011. The official press release quotes the Art Fair SourceBook: “This is an up-and-coming show in the Twin Cities…many many patrons who attend prefer it…because it’s an easier show to see, more compact.” This fair considers its very setting a work of art, the trees and the pond forming a de facto outdoor gallery into whose tranquility the lined booths are carefully dovetailed. If you think that the Loring Park Art Festival’s older cousins would have exhausted the city’s supply of artists and artwork, you’d be understandably wrong: this Festival features juried artwork proffered by 140 artists. The Festival’s overarching goal is cover the whole canvas of expression–every medium, style, and price range uniting to achieve art’s finest purpose: something for everyone. http://www.loringparkartfestival.com/.