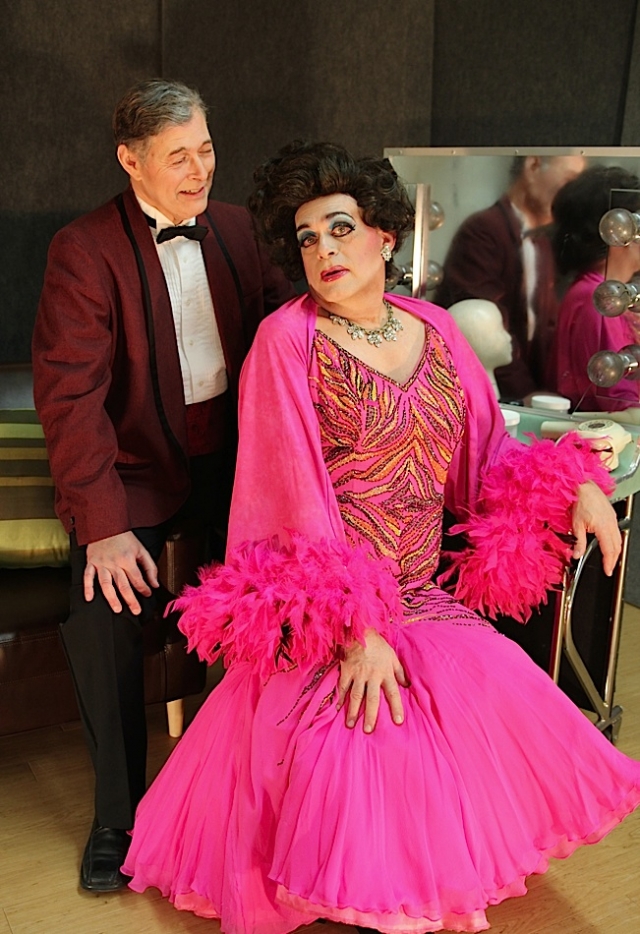 Jerry Herman’s La Cage Aux Folles has taken its place as one of the great American musicals. It rivals Herman’s other two classics, Hello Dolly! and Mame, in the realm of lots of singable tunes and vibrant wit woven into a unique romantic narrative. Bloomington Civic Theatre rivals Theater Latte Da as the region’s best producer of musical plays and with Joe Chvala’s staging of La Cage it now has yet another jewel in its crown.

However, crisis hits when Georges’s son, Jean-Michel, tells them he plans to marry a woman. Perish the thought! To add insult to injury, her father is a Right Wing political moralist who certainly has no truck with alternative sexuality and gender presentation. Obviously, the situation is ripe for madcap comedy and Chvala’s wonderful cast delivers that in abundance.

Hamson is renown as a costume designer but he has an impressive background as an actor. He is in top form here and voice. This may be the best thing I’ve seen Pounds do in the 25 years I’ve enjoyed his work. The men are splendidly matched. It’s as if they’ve actually lived in this relationship.

Candid Theatre fans will delight in the new side to that theatre’s core actor, MIchael Terrell Brown. He plays Jacob for BCT, the flamboyant maid who dons traditional sexy maid fantasy garb and imperial French court excess. Brown is a brilliant comic revelation.

Veteran actors Karen Weber, Fred Mackaman, and Alana La Bissoniere shine. Christian LaBissonierre’s maddeningly uptight Jean-MIchel and Holli Richgels’s sweet fiance Anne are endearing. We see how he underestimates her capacity to integrate the gay world into her larger understanding of life. So often we don’t give folks the credit they deserve.

Chvala has a gift for blending the humorous into his choreography. And he has outdone himself here. The dance style recalls the Folies Bergere. The impeccable comic timing of musical numbers and the wit-driven relationships of Harvey Fierstein’s book culminate in a joyous revival of a groundbreaking musical.

Anita Ruth’s music direction and band, Benjamin Olsen’s set, Ed Gleeman’s costumes, and Mike Grogan’s lighting transport us to a storybook version of the French Riviera. What could be more romantic!